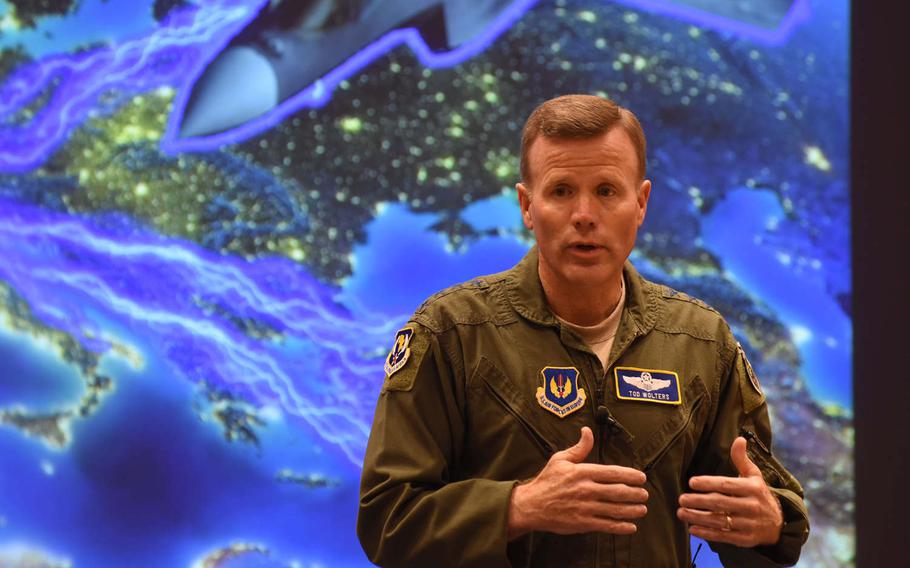 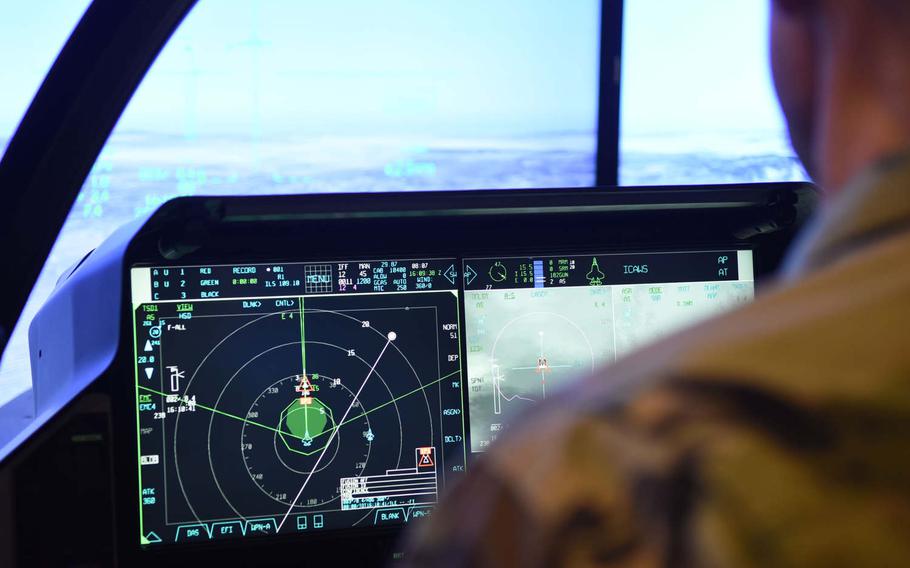 Buy Photo
Air Force officers from eight different countries, who attended an F-35 European leadership forum at Ramstein Air Base, Germany, had the chance to use an F-35 simulator set up at the Officer's Club on Thursday, July 20, 2017. (Jennifer H. Svan/Stars and Stripes) 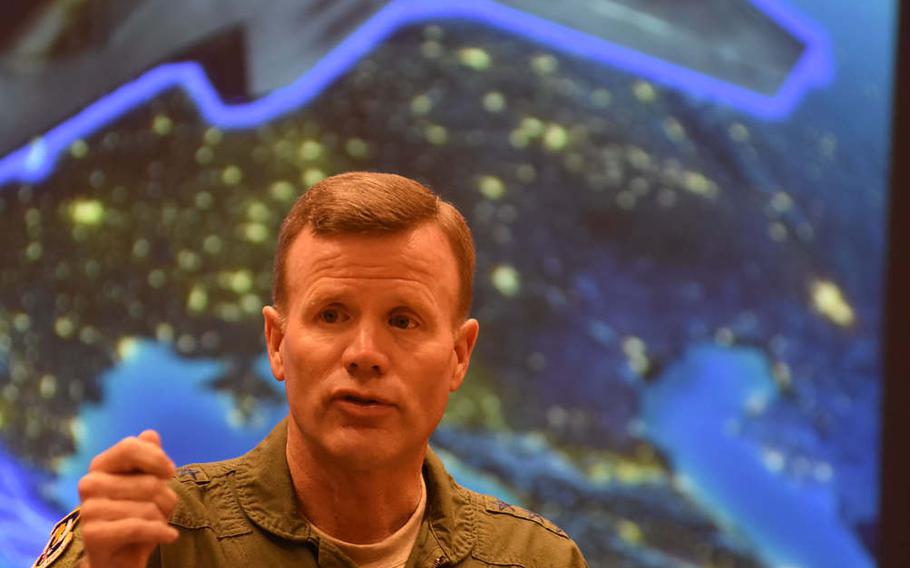 RAMSTEIN AIR BASE, Germany — The U.S. Air Force has yet to stand up a squadron of F-35s in Europe, but it’s already working on how to integrate the fifth-generation combat jet with some of its closest allies in the region.

U.S. Air Forces in Europe this week brought together about 50 senior military fliers and planners from eight nations, all with a stake in the newest and most expensive fighter aircraft on the block.

The two-day forum on the F-35 Joint Strike Fighter served to promote cooperation among the U.S. and its European counterparts that are already flying the plane or plan to do so. The goal was to share lessons learned and build common approaches that will support integrated flying operations in Europe in the future.

“We have to find a way to nest it all together,” said Gen. Tod Wolters, USAFE and Air Forces Africa commander.

“At the end of the day, if we can say this is something that we’re fusing into the system … we’re in a great place,” he told the group, which included fighter pilots, base commanders and chiefs of staff. The Army, NATO and the Marine Corps also sent representatives, as did Lockheed Martin, the F-35 Lightning II manufacturer.

The forum, which concluded late Thursday, was the first of its kind in Europe, officials said. It followed a similar conference held in March in the Pacific, where Japan, South Korea and Australia have all purchased the F-35.

Joining the U.S. at the European forum were Israel, Italy, Denmark, Norway, the Netherlands, the United Kingdom and Turkey. Those nations have all purchased the aircraft. Israel and Italy are the first to be flying the plane in the region.

“We like to remind (people that) Italy was the first nation to fly the airplane overseas, across the Atlantic, so we are very proud of that,” said Maj. Gen. Aurelio Colagrande, chief of staff of Italy’s air command, noting that his country’s air force currently has three F-35s in its inventory.

The aircraft has had problems, he said, but that’s to be expected from a “brand-new machine.”

Despite those challenges, “we are very confident that the F-35 is a very capable airplane and all the issues that we are having right now will be solved in the future,” he said.

In the States, too, the F-35 program has been beset by technical and other problems. Most recently, F-35A flight operations at Luke Air Force Base, Ariz., were temporarily paused last month when some pilots experienced symptoms similar to hypoxia, or oxygen deprivation.

The U.S. is expected to spend nearly $400 billion to buy about 2,443 aircraft, making it the Pentagon’s most expensive procurement program in history. President Donald Trump, Sen. John McCain and other prominent critics of the program have assailed its budget overruns.

But Lockheed Martin officials said Thursday the company is continuing to drive down costs because of manufacturing efficiencies gained through increased production rates. They expect to drop the cost for one aircraft to $85 million in 2019, about the same price tag as a fourth-generation fighter, said Bob Dulaney, a Lockheed Martin aeronautics representative.

The cost for the Air Force version of the plane fell below $100 million for the first time earlier this year, according to a February report in The New York Times.

“Facilities are under construction as we speak,” he said, “as well as other infrastructure that comes with adding two more squadrons.”

It’s been a long time since the U.S. and some of its European allies and partners gained a new aircraft system around the same time, said Maj. Gen Timothy Fay, USAFE-AFAFRICA vice commander.

“Bringing the F-35 into this theater will really change the way we do business here in a way that we probably haven’t seen for decades,” Fay said.