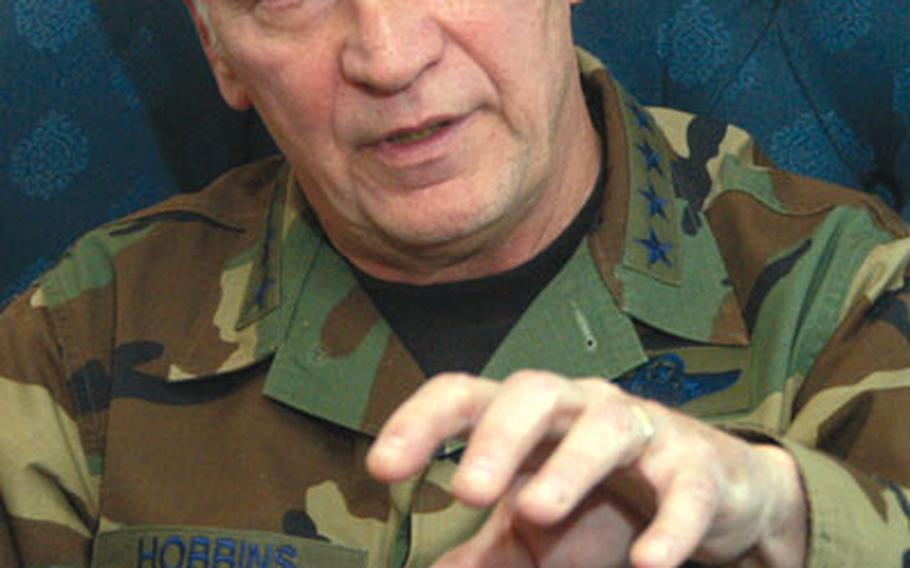 United States Air Forces in Europe commander Gen. Tom Hobbins, during an interview with Stars and Stripes in his office at Ramstein Air Base, Germany. (Michael Abrams / S&S)

RAMSTEIN AIR BASE, Germany &#8212; Improving relations with African nations and NATO allies in Eastern Europe, and boosting efficiency are among the top priorities for the coming year, according to the Air Force&#8217;s top officer in Europe.

Gen. Tom Hobbins last week reflected on his first year as commander of U.S. Air Forces in Europe and discussed the command&#8217;s challenges for the next year during an interview with Stars and Stripes.

Africa will again be at the top of the list for the command, which includes about 41,000 active-duty airmen, Reserves and civilians stationed at bases across Europe.

Since the Sept. 11, 2001, attacks, the U.S. military has increased its focus on Africa due to the continent&#8217;s natural resources and concerns that impoverished nations are becoming breeding grounds for terrorists.

Air Force medical teams from bases in Europe have performed humanitarian work in rural villages. But Hobbins said boosting relations and cooperation with African nations is just as important.

&#8220;When we go down there and engage with these countries, obviously we&#8217;re helping them not only from a [military] intelligence standpoint but also understanding how to control their borders and how to control the terrorism flow, the human trafficking and smuggling,&#8221; he said.

Last week, the Pentagon announced the creation of a working group that will look at possibly establishing a new Africa command that would zero in on preventing terrorism and promote stability on the continent.

The increased emphasis on Africa presents airlift challenges for USAFE, Hobbins said. The four-star general has made it no secret that he would like to create a C-17 squadron at Ramstein Air Base to help transport airmen and cargo for missions in Africa. But no decision has been made.

The C-17 Globemaster III is the Air Force&#8217;s newest cargo jet and has greater range and capacity than the C-130 prop plane that is permanently based in Germany.

&#8220;I truly would love to have C-17s here at Ramstein permanently based rather than just being the pass-through location,&#8221; he said.

In addition to Africa, the command plans to spend more time training in Eastern Europe in countries such as Romania and Bulgaria. Ranges in those areas offer flight training over water, land and mountains, he said. Those opportunities are shrinking in Europe.

&#8220;In Europe today, our airspace is getting smaller,&#8221; he said. &#8220;Quite frankly, a lot of the fighter operations that occur here in central Europe are being encroached upon by the increase of civil air traffic.&#8221;

An initiative that will touch nearly every unit in the command is the push to increase efficiency as the Air Force tries to eliminate 40,000 airmen from its ranks. Hobbins said it is important to cut waste because the command will have to accomplish its mission with fewer people.

&#8220;I&#8217;d like to be able to show our airmen that we&#8217;re thinking about them as people start to leave and are not replaced. That, in fact, we have skinnied down the work processes itself to the point that the people that are remaining can handle [it].&#8221;

Flying cuts to save USAFE $114M

About $77 million of the savings went into quality-of-life programs such as Child Development Centers, sports facilities and 4,200 American Forces Network decoders for airmen, said Capt. Elizabeth Culbertson, a spokeswoman for the command&#8217;s headquarters in Ramstein. The rest was returned to the Air Force.

The decoders went to households in areas that cannot be reached by the AFN signal.

The Air Force estimates how much it will cost the command per hour to fly two years prior, according to Master Sgt. Chuck Roberts, a USAFE spokesman. The Pentagon calculates the funding for major commands by multiplying that rate by the hours planned to be flown for the year.