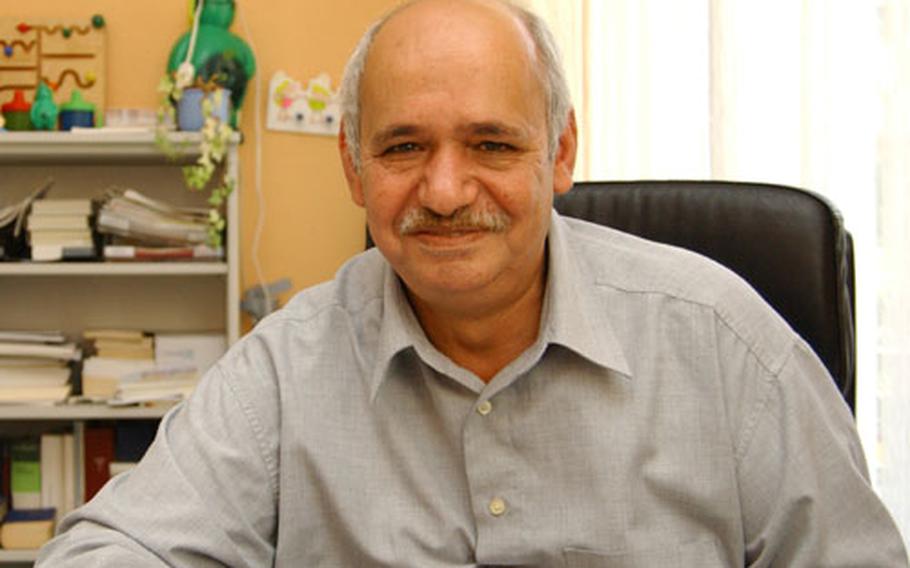 Dr. Jabbar Said-Falyh is originally from southern Iraq. He has lived in Germany for 40 years. He played a key role in the recent airlift of 18 Iraqi children brought to Germany to receive treatment currently not available in Iraq. (Lisa Horn / S&S)

Dr. Jabbar Said-Falyh is originally from southern Iraq. He has lived in Germany for 40 years. He played a key role in the recent airlift of 18 Iraqi children brought to Germany to receive treatment currently not available in Iraq. (Lisa Horn / S&S) Brig. Gen. Erwin F. Lessel III, 86th Airlift Wing commander, Ramstein Air Base, Germany, hands a snack to one of the 18 Iraqi children who arrived at Ramstein Air Base on Oct. 6. The children were flown in by the U.S. Air Force from Baghdad International Airport, to receive medical care from hospitals throughout Rhineland-Pfalz, Germany. (Courtesy of USAF) 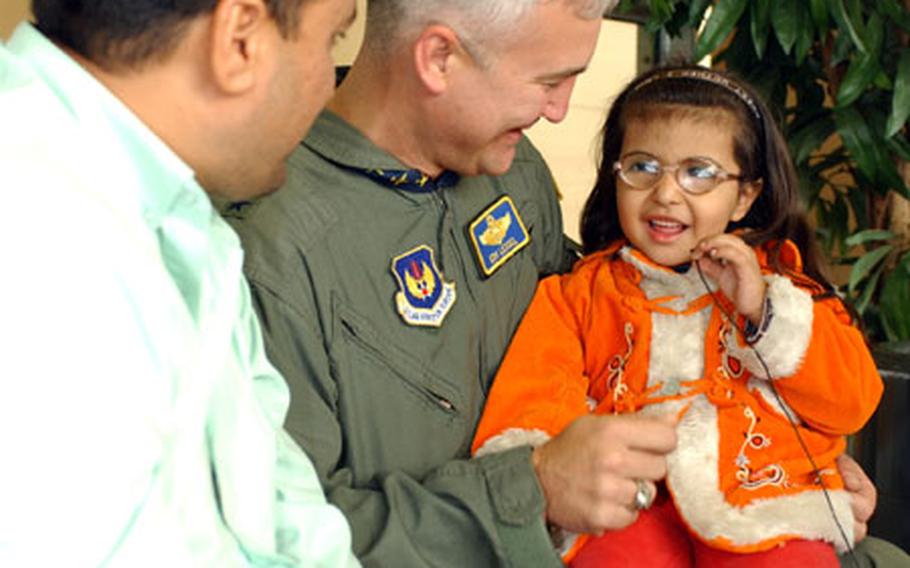 Eighteen Iraqi children are on the road to recovery after receiving free medical care in Germany earlier this month.

The German state of Rhineland-Pfalz, home of the Kaiserslautern military community, volunteered to provide the children with medical treatment not available in Iraq.

The U.S. Air Force transported the 18 to Ramstein Air Base, Germany, on Oct. 6. Most of the children suffer from congenital, acquired or traumatic conditions; two were injured during the recent war.

The German Red Cross took 17 of the children to 12 Rhineland-Pfalz hospitals, where an array of specialty doctors began treatment. The 18th patient was flown to Walter Reed Medical Center in Washington, D.C..

The hospitals agreed to provide roughly $500,000 in medical care and lodging for the children&#8217;s escorts, said Beate Fasbender, spokesperson for the Rhineland-Pfalz Ministry of Health.

Such medical evacuation flights out of Iraq are common, said U.S. Army Col. Frederick Gerber, chief of operations for the coalition provisional authority ministry of health.

However, the number of children helped in this airlift was unusual.

&#8220;The program to evacuate sick Iraqis out of Iraq to what we call donor countries is a long-standing program,&#8221; Gerber said. &#8220;This works with the United Nations and the U.S. coalition forces in any country that we are engaged in.

&#8220;We&#8217;ve had about a dozen donor countries that have come to the International Organization for Migration and said they would help.&#8221;

The IOM&#8217;s Medical Evacuation and Health Reconstruction Program in Iraq assists in selecting patients, coordinates travel and ensures that the children and their escorts travel to and from their donor countries safely.

The patient sent to Walter Reed is a teenage girl with cervical cancer. Her family had worked closely with U.S. coalition forces, Gerber said.

&#8220;Her very aggressive cancer could not be treated in Iraq. And since we had no donor countries volunteering or offering the service to treat an adolescent with cancer, we made the request to get her evacuated.&#8221;

The German airlift began when Dr. Jabbar Said-Falyh, an Iraqi doctor practicing medicine in Frankfurt, contacted Doris Peckhaus, an official with the Rhineland-Pfalz health ministry. Between 1993 to 1998, Said-Falyh had brought seven children to Germany where he provided their care free of charge.

Since the children have been in Germany, Said-Falyh has conferred with their doctors daily and has provided feedback to the IOM, which passes it on to the children&#8217;s families.

As of last week, most of the children had undergone surgery, but none has returned to Iraq, Gerber said.

Gerber is currently working on flying a group of children to Italy, and Said-Falyh plans to return to Iraq in December to work on a second German airlift.