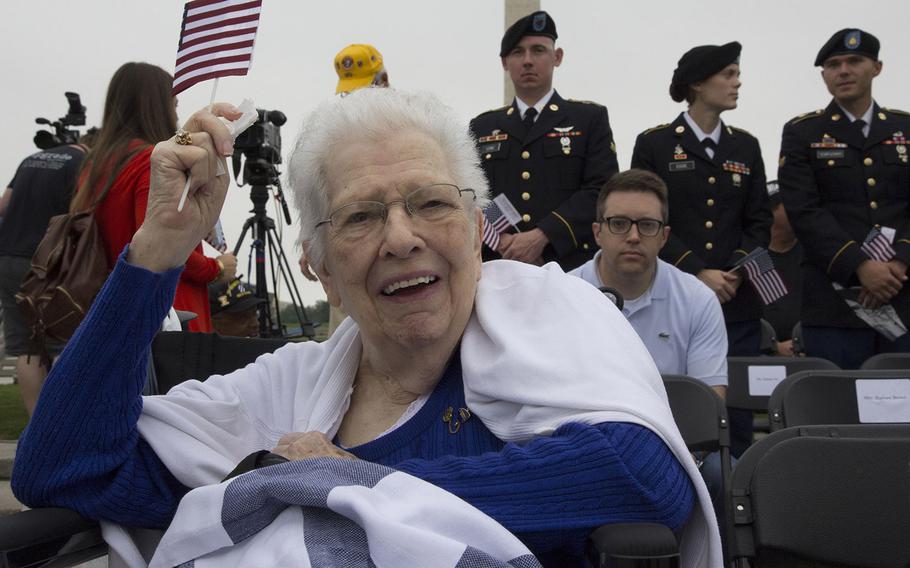 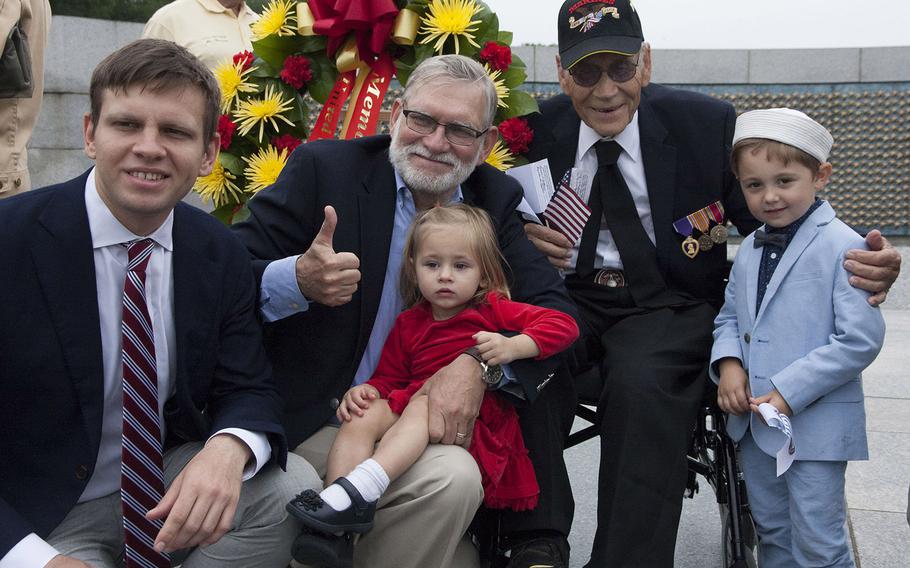 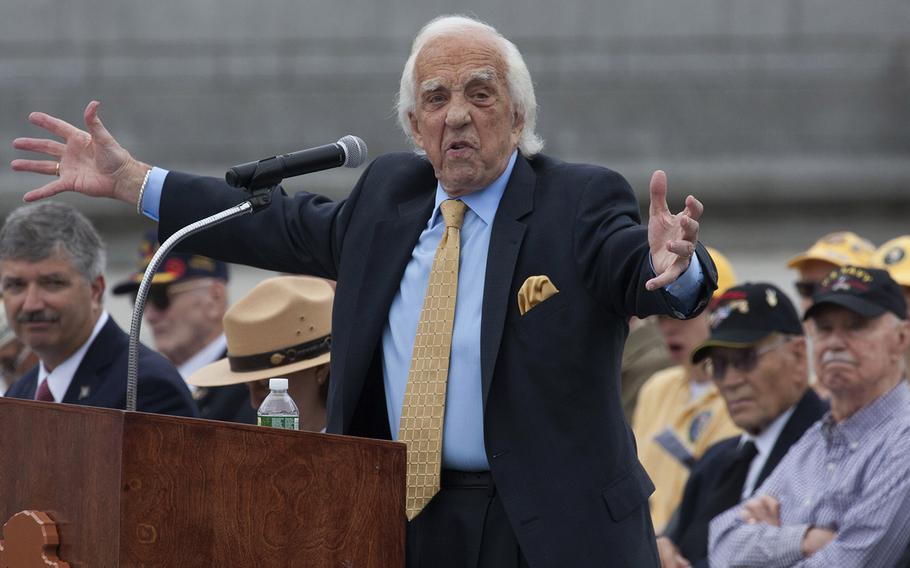 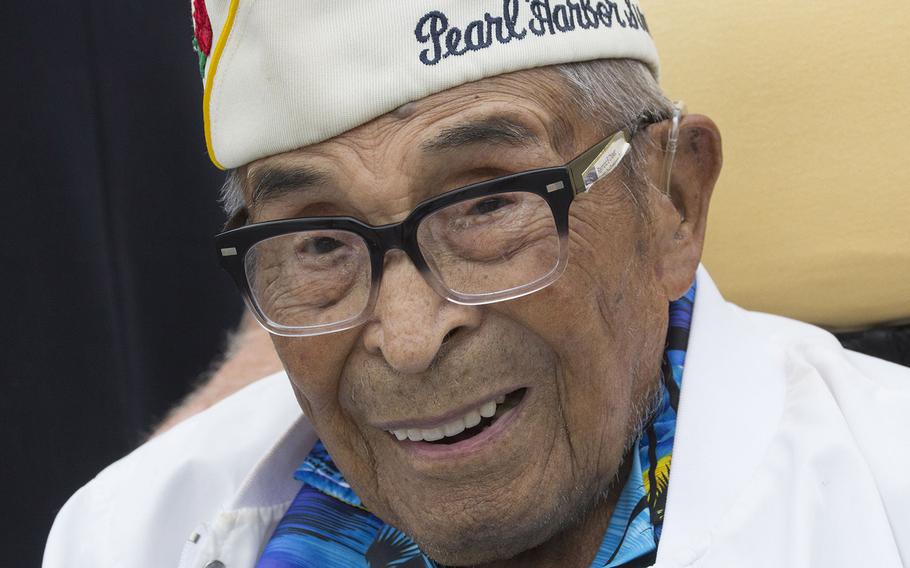 Buy Photo
105-year-old World War II veteran Raymond Chavez, the oldest living survivor of the attack on Pearl Harbor, poses for a photo after the Memorial Day ceremony at the National World War II Memorial in Washington, D.C., May 29, 2017. (Joe Gromelski/Stars and Stripes) 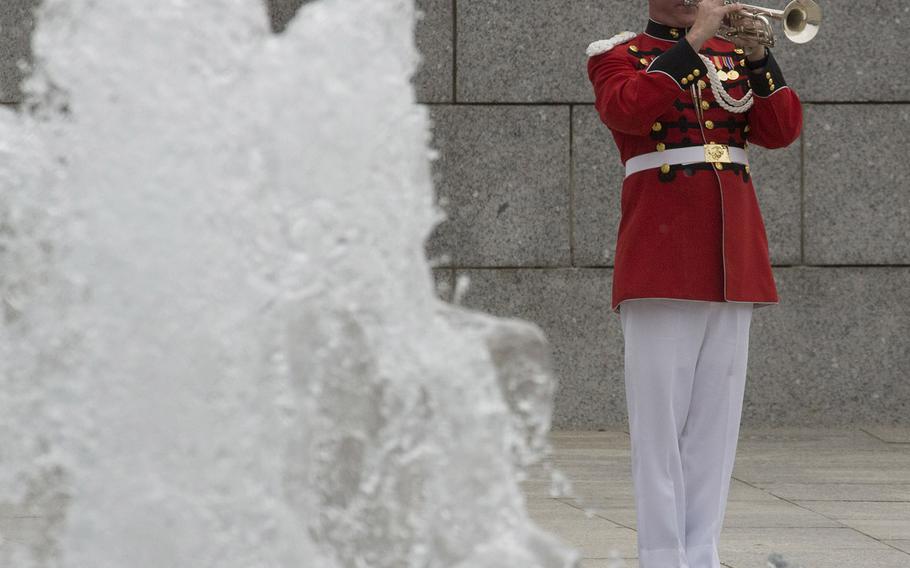 Buy Photo
With a fountain at the National World War II Memorial in Washington, D.C., in the foreground, a bugler plays taps at the Memorial Day ceremony on May 29, 2017. (Joe Gromelski/Stars and Stripes) 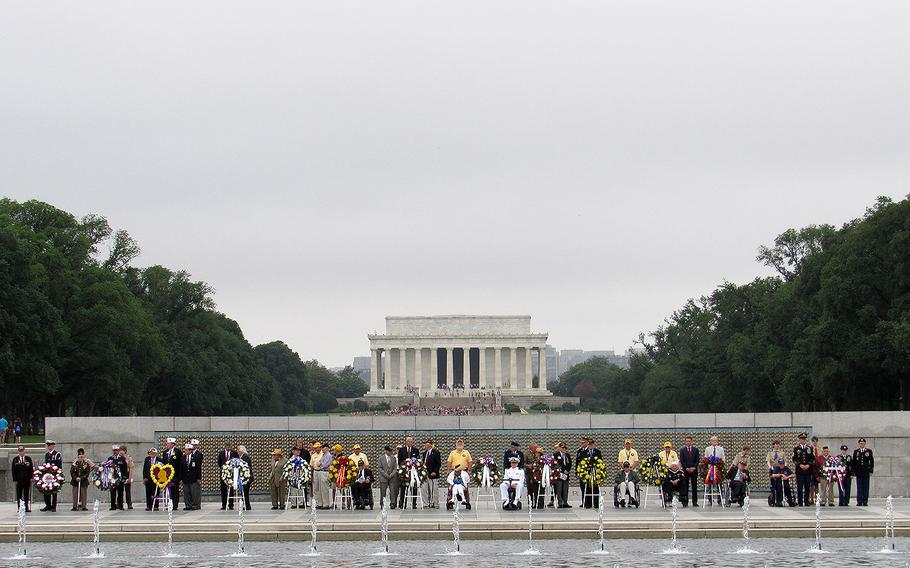 Buy Photo
The presentation of wreaths at the World War II Memorial on Memorial Day, Monday, May 29, 2017. (Lauren King/Stars and Stripes) 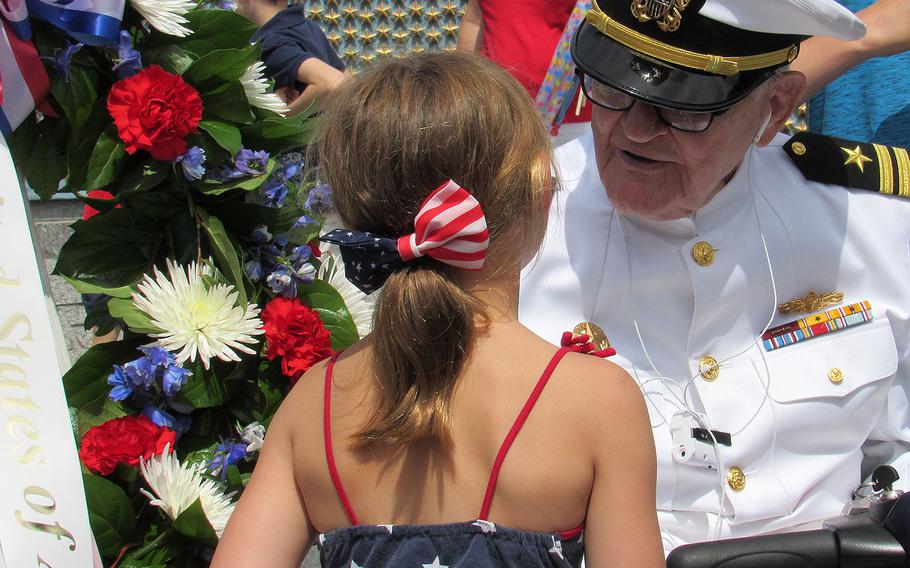 WASHINGTON — They gathered Monday morning at the World War II Memorial to remember the fallen on Memorial Day, but survivors can feel that responsibility every day.

Marine veteran Edward S. Kachinske was surrounded by family members following the ceremony. He shook hands with admirers and posed for photos. Behind him, his oldest son, Tim Kachinske, said he never knew much of his father’s war experiences or wounds until he was well into adulthood.

“We really never knew the suffering he went through,” Tim Kachinske said.

Pfc. Kachinske was an amphibious tank driver when he was wounded on Okinawa in 1945. He was riding on top of a tank when it hit a mine. He had a broken pelvis and shrapnel wounds, his son said. After he returned home, he was unable to continue as a dairy farmer because sitting was painful. He got a construction job at which sitting would have gotten him fired, his son quipped.

“He never felt sorry for himself,” Tim Kachinske said.

That selfless mentality also was visible at the dawn of WWII.

Jim Downing, the second-oldest Pearl Harbor survivor, was having breakfast with his wife in Hawaii when he heard the attack at Pearl Harbor in 1941. He got into his car and rushed to the dock, but he couldn’t reach his ship, the USS West Virginia, Mike Hydeck said in his introductory remarks on Monday. The ship was on fire after having been struck by nine torpedoes. Downing jumped onto the nearby USS Tennessee, slid down the gun barrel and landed on the USS West Virginia.

Hydeck said Downing held a firehose in one hand and with his other hand studied the dog tags of dead sailors aboard his ship. He memorized their names so he could write to their families and tell them they were all heroes.

This survivor’s work was not finished. That afternoon, he visited the hospital with a notebook and a pencil, Hydeck said. The sailor took down messages from the wounded so they could be sent home. For some of them, those were their last words.

Both Yoho and Downing also talked to the crowd about their fellow veterans.

To those who suffered postwar from visible and invisible scars, inequality, survivors’ guilt, unemployment or homelessness, or had committed suicide, Downing said they were heroes to him, and Yoho offered his prayers.

“Some are here with us today. Many more lie in eternal rest in a foreign soil or at the bottom of the sea in a watery grave,” Yoho said. “Others live too distant to be here, and there are those whose health does not permit them to travel. They are all in our prayers.”