Women are making up more of the military, but are more likely to leave early, new report says 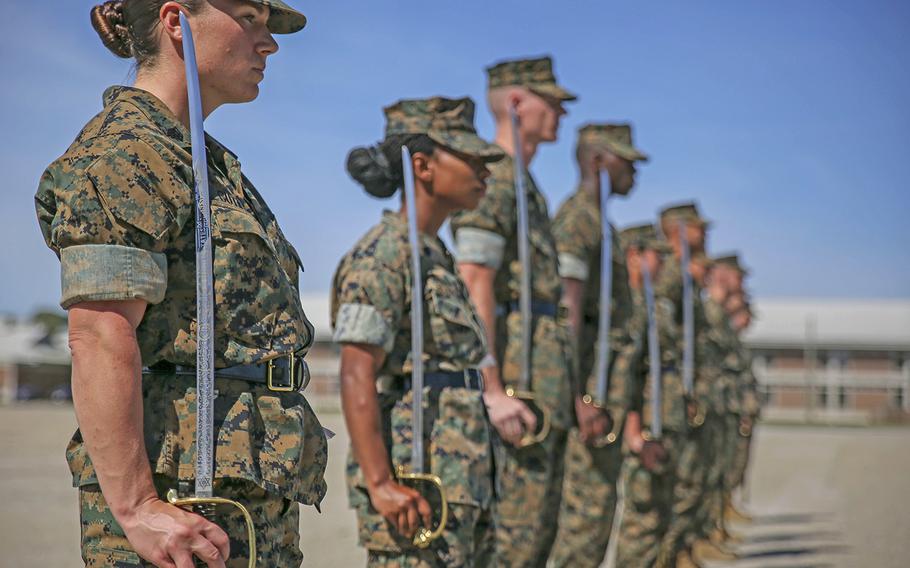 WASHINGTON — Women are making up an increasing proportion of the U.S. armed forces, but female troops are 28% more likely than men to leave the military early, the Government Accountability Office found in a study released Tuesday.

The percentage of women serving in the military services rose slightly from 15.1% of the active-duty force in 2004 to 16.5% in 2018, the GAO found. The Congress-mandated study looked at personnel data from the Army, the Air Force, the Navy and the Marine Corps for the 15-year period that ended in 2018, the most recent year for which they had complete data.

The report’s authors found a variety of reasons that women are significantly more likely to leave the military earlier than their male counterparts, largely based on family-related and cultural issues, which the authors encouraged the Pentagon to address.

For years, Defense Department officials have indicated that increasing both female recruitment and retention rates are important to ensure diversity within the ranks — especially since the Pentagon opened all jobs and units, including front-line combat positions, to women in 2015. But the GAO found service leaders had not implemented plans with “goals, performance measures and timeframes” that would aid in assessing female recruiting and retention.

“DOD officials stated that retention goals have, in the past, been misconstrued as quotas and, as such, the department does not set goals or targets for gender,” the GAO report states. “However, goals are not quotas and can help guide continued improvement. Without DOD guidance and service plans with goals, performance measures, and timeframes to monitor female recruitment and retention efforts, DOD may continue to miss opportunities to recruit and retain a valuable segment for its active-duty force.”

As a result of its analysis, the GAO recommended the four military services implement such plans with “clearly defined goals” to monitor and improve female retention and recruiting. It also recommended the secretary of defense and his personnel chief provide the services clear guidance on the issue in the Pentagon’s forthcoming diversity and inclusion strategic plan due in the fall.

Pentagon officials told the GAO that they agreed with those recommendations, according to the authors.

The report’s authors noted the lower retention rates among female troops has led to an even smaller percentage of women serving within the highest ranks of the military. They also found women reported six primary factors for their decision to leave the service before retirement eligibility, which included problems they perceived within the military’s organizational culture such a lack of female mentors.

“Study participants also noted that they often faced sexism and the existence of an ‘old boys’ network,’ especially in career fields dominated by males,” the GAO authors wrote. “As such, these female service members felt they had to work harder to prove themselves and also felt they were sometimes not treated equally because they were female.”

Other factors that the GAO concluded largely spurred women to leave the military included uncertain work schedules, impacts of deployments on their family lives, family-planning issues such as pregnancy, and issues with dependent care such as limited day care hours and long wait lists for child care services.

“For example, two females stated that the perpetrator was not punished, and another woman cited the lack of support from other service members as contributing to their decisions to separate from the military,” the authors wrote.

Nonetheless, the Pentagon reported the military saw 7,825 sexual assault reports among its ranks in 2019, a 3% increase from those reported during 2018.

Overall, the GAO’s data showed the percentage of women among U.S. troops dropped consistently in the early years that the agency studied, from 15.1% in 2004 to 14.4% in 2009 before increasing slightly every year to reach 16.5 percent in 2018. However, more women were actually serving in 2004, when a much larger military was conducting major combat operations in Iraq and Afghanistan. DOD reported 236,342 female service members in 2004 and 232,063 in 2018.

The Army, meanwhile, reported a reduction in the percentage of women in its service during the same time. In 2018, 15.1% of the active-duty Army were female soldiers, down from 15.3% in 2004. The Army reported its lowest percentages of female soldiers at 13.6% in 2012.