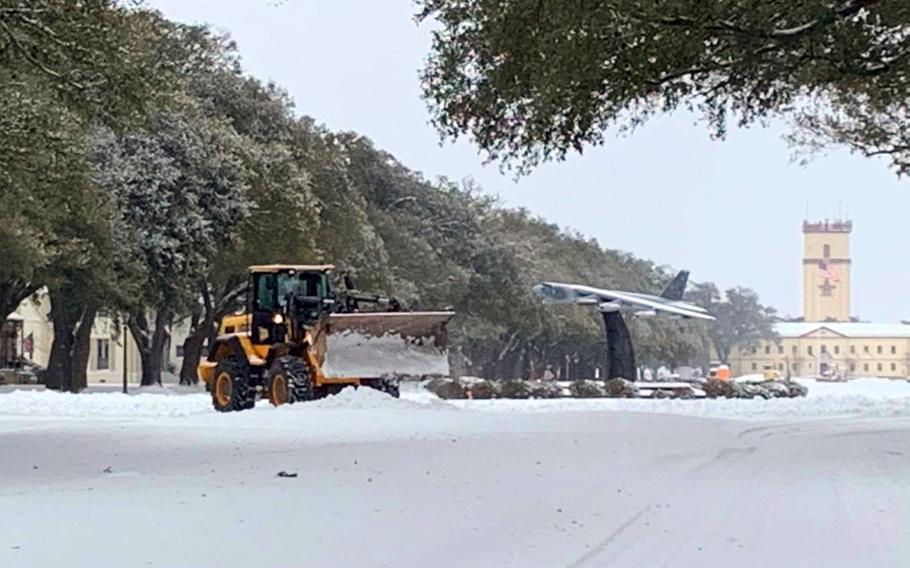 Barksdale Air Force Base near Bossier City, La., was blanketed by a mixture of snow, sleet and freezing rain that closed the base Tuesday. It was one of at least a dozen military bases to close Tuesday as a winter storm swept across portions of the southern and eastern United States. (U.S. Air Force)

Barksdale Air Force Base near Bossier City, La., was blanketed by a mixture of snow, sleet and freezing rain that closed the base Tuesday. It was one of at least a dozen military bases to close Tuesday as a winter storm swept across portions of the southern and eastern United States. (U.S. Air Force) 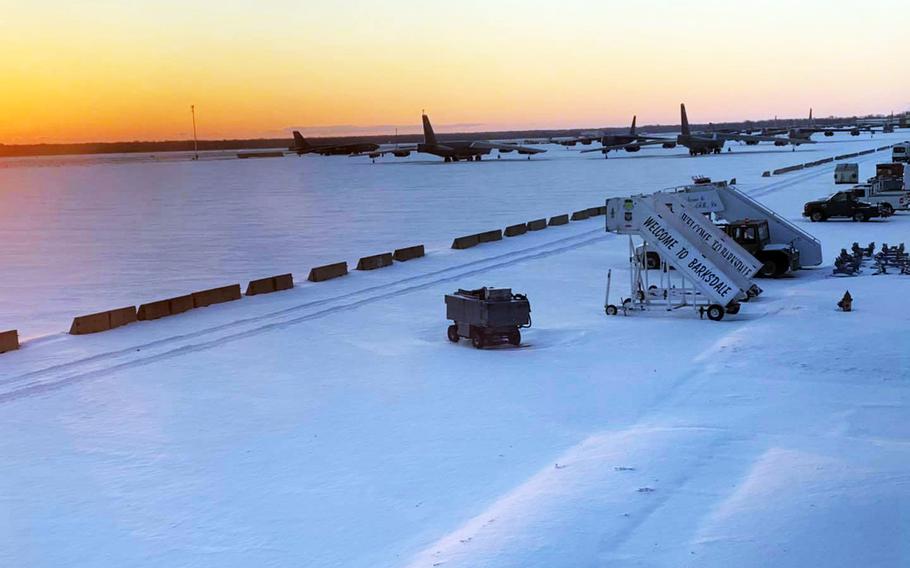 More than a dozen military bases stretching from Fort Drum in New York to Fort Hood in Texas were closed Tuesday as large swaths of the country were gripped by freezing temperatures and dangerous weather conditions.

In southern portions of the United States, many residents were dealing with freezing temperatures and power and water outages.

Dyess Air Force Base in west Texas was without water Tuesday because of a power outage at Abilene's water treatment facility. Most of the city was expected to get water back by the end of the day, but a boil water notice will continue, city officials said.

“Do not use water unless you are using it to drink or cook. Please forgo baths, showers and other non-life sustaining uses,” Col. Jose E. Sumangil, commander of the base’s 7th Bomb Wing, told service members and families in a statement. “We are doing everything we can to take care of the issues that are arising due to the cold weather.”

Nonessential operations for at least 15 military bases were delayed or closed Tuesday as freezing weather, snow and icy conditions left more than 150 million Americans under some form of winter weather alert, according to the National Weather Service.

The massive winter storm hit the Southwest, Midwest and central Plains before moving on to the Deep South and New England, carrying heavy snow and freezing rain, The Associated Press reported. Temperatures began dropping over the weekend with conditions deteriorated to cause significant problems to power grids and roads, particularly in regions where multiple days below freezing is unusual.

Severe power failures in Texas have left more than 4 million homes and businesses without electricity Tuesday, the AP reported. The state’s major utility provider instituted rolling blackouts to meet demand during the unusual weather. Some of these blackouts have left residents in single-digit temperatures with no power for more than 24 hours, which triggered Texas Gov. Greg Abbott to call for emergency reform of the agency.

Dyess, where the high temperature Tuesday was projected to be 23 degrees, was among base closures in the state that included Fort Hood, Joint Base San Antonio, Goodfellow Air Force Base in San Angelo and Red River Army Depot, located near Texarkana. All were down to mission-essential personnel only.

“Cold weather is bringing out some crazy issues,” he wrote.

The base, which has been closed since Friday because of the freezing temperatures, has had “numerous broken water lines all across post,” but none within military family housing, said Brian Dosa, director of the base’s public works. The breaks have not caused any major issues, “just a lot of work turning off power and cleaning up,” he said.

Though the base has not been impacted by rolling blackouts across the state, in nearby Killeen, nearly 20,000 residents were without power Tuesday, according to the Killeen Daily Herald. The temperature Tuesday is expected to drop to 18 degrees. More snow is in Wednesday’s forecast.

“Snow and ice on our roads and parking lots has also been an ongoing challenge, as we are not equipped for snow removal,” Dosa said. “Focus has been on the medical center, fire stations, [gates] and major intersections.”

At Fort Sill in Oklahoma, the base already announced it will remain closed Wednesday. Snow is in the forecast Wednesday and temperatures aren’t expected to cross above freezing until Friday.

“Some service members and their families have experienced power outages and frozen pipes but nothing substantial or long lasting at this time,” said Jessica Tackaberry, spokeswoman for the base. “The Fort Sill team has been working relentlessly to keep the installation safe and operational. We ask if any member of our team is affected from this weather to please contact us.”

“Our priority is to ensure the safety and well-being of our workforce as conditions improve and we prepare to bring employees back onto the installation,” said Julie Frederick, spokeswoman at Redstone Arsenal.

Kirtland Air Force Base, N.M., Naval Air Station Kingsville, Texas, and Fort Riley, Kan., delayed the morning report time for personnel. Fort Riley reported a rolling blackout from the utility company that caused a base-wide power outage Tuesday morning. Some support services were forced to close, because buildings quickly became too cold. Key facilities were kept running with generators, according to the base.

As the storm moves east, another is expected to cause snow and freezing rain across the south Wednesday, according to the National Weather Service. Conditions are expected to begin improving Thursday.