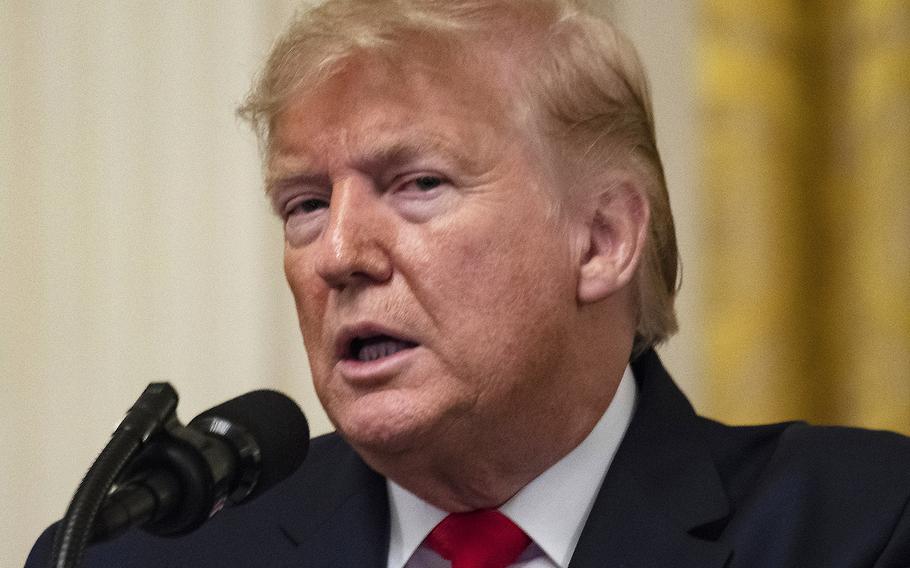 McEnany told reporters at the White House that Trump plans to attempt to block the 2021 NDAA over objections to renaming military bases that honor Confederate leaders and provisions that restrict the quick withdrawal of troops from Afghanistan and Germany. The defense bill also doesn’t include a provision to gut legal protections for social media companies, which lawmakers have argued doesn’t fall into the jurisdiction of military policy.

No timeline has been set for when Trump will veto the NDAA. But he has six days remaining, excluding Sundays, to sign the bill into law or issue a veto. Congress would have to again vote on the measure to override a veto.

The Senate passed the defense bill by a vote of 84-13 and the House passed it with a 335-78 vote, setting the stage to override a veto potentially.

The passage marked the 60th consecutive year that Congress approved the defense bill before the end of the calendar year. Sen. Jim Inhofe, R-Okla., the chairman of the Senate Armed Services Committee, said the NDAA is among the few examples of bipartisanship in an increasingly divided Congress.

“It’s the most important bill we’ll do all year,” Inhofe said in a statement last week. “It’s what the Constitution tells us we have to do. We must protect freedom, democracy and peace, and support our troops. This is the heart of the National Defense Authorization Act and I look forward to it becoming law before the end of the year.”

Sen. Jack Reed of Rhode Island, the top Democrat on the Senate Armed Services Committee, praised senators for supporting the bill. He urged Trump to sign it into law.

“If he insists on trying to use our troops as pawns in his war on social media companies, it could needlessly disrupt military programs and operations,” Reed said Friday. “President Trump should refrain from blocking a raise for our troops because he is unhappy with what is trending on Twitter.

Among the critical measures included in the NDAA, the bill would authorize a 3% pay raise for troops, a slight boost to hazardous-duty pay, an increase of more than 5,000 military troops, and provide funding for a new initiative aimed at checking China’s military power in southeast Asia.