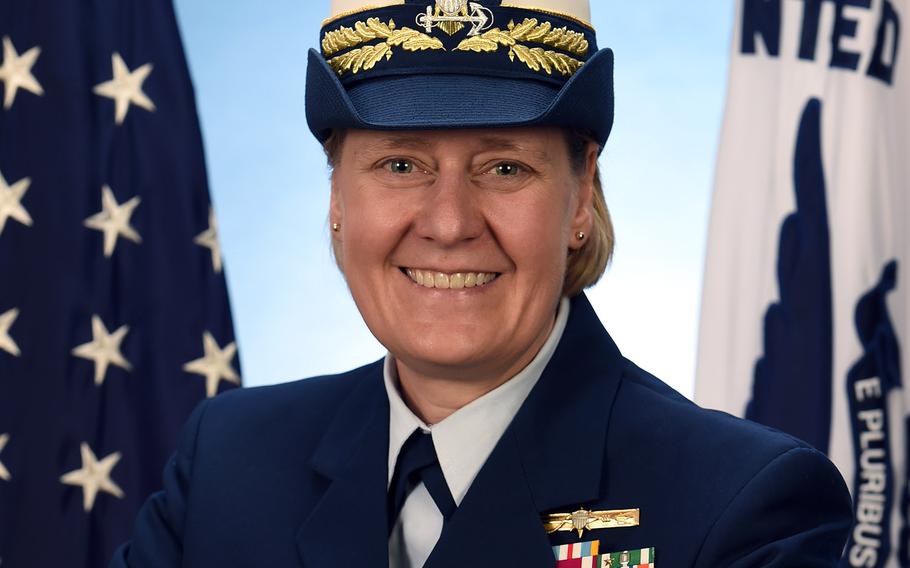 Vice Adm. Linda L. Fagan has been nominated by the White House to serve as the next vice commandant of the Coast Guard, which would make her the first female four-star admiral in the service, the Coast Guard announced Monday. (U.S. Coast Guard)

WASHINGTON — Vice Adm. Linda L. Fagan has been nominated by the White House to serve as the next vice commandant of the Coast Guard, which would make her the first female four-star admiral in the service, the Coast Guard announced Monday.

A 1985 Coast Guard Academy graduate, Fagan now serves as commander of the Coast Guard Pacific Area. She is also the service’s first-ever Gold Ancient Trident, which is the officer with the longest service record in the marine safety field, according to the Coast Guard statement issued Monday.

Adm. Karl L. Schultz, the commandant of the Coast Guard, said in the statement that Fagan is “an outstanding leader with 36 years of Coast Guard operations, policy-making, joint service and interagency experience.

“Throughout her distinguished career, she has been a top performer and a trailblazer,” he said. “As the Coast Guard’s first female four-star admiral and President [Joe] Biden’s nominee to serve as the Coast Guard’s 32nd vice commandant, Adm. Fagan will be instrumental in moving the service forward at a critical juncture in our history.”

In her current position, Fagan oversees all Coast Guard missions from the Rocky Mountains to the East Coast of Africa, according to the service. She also serves as commander of Defense Force West and provides Coast Guard mission support to the Defense Department and combatant commanders.

Under Fagan’s leadership, the service has expanded its presence and engagement in the Western Pacific in the face of growing threats from China and North Korea.

In 2019, the Coast Guard sent two cutters to support freedom-of-navigation and police ship-to-ship transfers that are barred by international sanctions from entering North Korea. Also that year, the Coast Guard sent a cutter through the Taiwan Strait for the first time, challenging Beijing’s claims to the waterway.

Also during Fagan’s tenure, the Coast Guard began “strategically homeporting” its newest fast-response cutters in Guam to police Chinese illegal fishing in the region. When announcing the move in October, national security adviser Robert O’Brien said the illegal fishing “threatens our sovereignty, as well as the sovereignty of our Pacific neighbors and endangers regional stability.”

Fagan will take over for Adm. Charles W. Ray on June 18, the Coast Guard said.