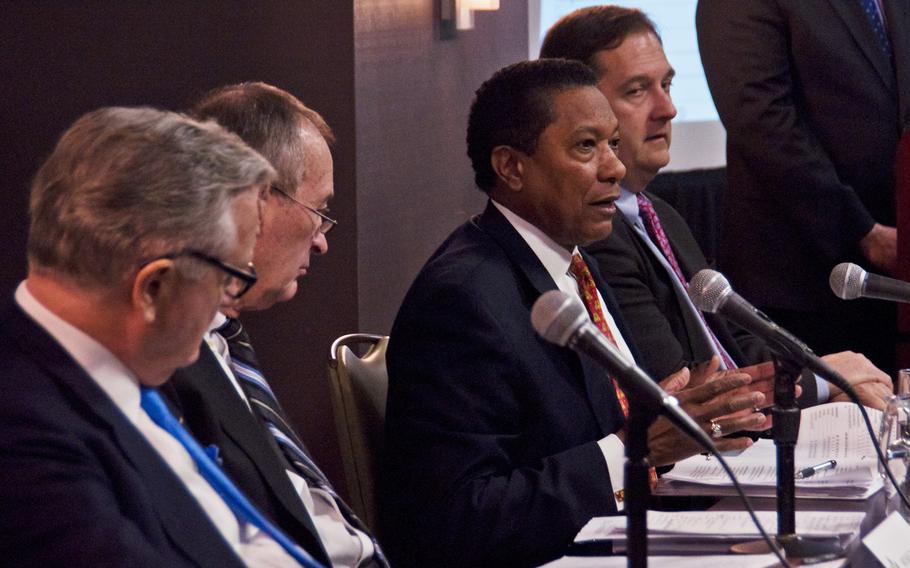 WASHINGTON — President Barack Obama announced Monday he will back sweeping overhauls to the military retirement and health care systems as a way to ensure the costly benefits survive into the future.

Obama said he will provide Congress a list of proposals by the end of April that will be based on the recommendations of the Military Compensation and Retirement Modernization Commission, a panel created by lawmakers to find solutions to ballooning personnel expenses.

The panel has advised the military to modernize its 20-year pensions by reducing payouts and adding a 401(k)-style option, and replace Tricare health coverage with a wide variety of private insurance plans. Those and a list of 15 changes to military compensation — including a consolidation of commissaries and exchanges — could save almost $5 billion next year and up to $10.4 billion per year by 2020, the panel claims.

“I believe the recommendations are an important step forward in protecting the long-term viability of the all-volunteer force, improving quality-of-life for service members and their families, and ensuring the fiscal sustainability of the military compensation and retirement systems,” Obama wrote in the letter to Congress.

Obama wrote that he will complete the legislative proposals and submit them to Congress by April 30, when he will request they be passed without delay.

During a troop talk about building “the force of the future”, Secretary of Defense Ashton Carter said the Pentagon is exploring different retirement system options. “I’m looking very hard right now at blended retirement plans that would be similar to the 401k mechanism that is widespread in civil society,” he told soldiers at Fort Drum, N.Y., on Monday.

Carter noted that about 80 percent of those who serve don’t receive any retirement pay because they leave the military before completing 20 years of service. The Pentagon chief sees that as problematic for recruitment and retention.

“[The vast majority of troops] leave with nothing. So we want to look at that and see if we can create a choice that opens up opportunity and allows us to be more similar to other institutions, and therefore [more] competitive with them in getting people to join us and stick with us,” he said.

Carter did not discuss how the Defense Department would find the money to fund a new 401k-type of retirement system.

The panel recommendations have gotten widespread support on Capitol Hill, where lawmakers are struggling with tight budgets and sequestration caps on spending. Panel members have testified at hearings aimed at creating reform legislation.

But the overhauls have drawn a mixed response from service and veterans groups, with some advocating to fix the current systems and others saying they might support big changes.

It found the lifelong pensions guaranteed to those who put in 20 years of service have racked up big expenses and the military could save money by contributing smaller amounts to military thrift savings plans over the course of servicemembers’ careers.

Meanwhile, the Tricare health insurance system is in a “death spiral,” suffering from a lack of access to medical care and increasing costs. It proposes replacing it with an insurance system similar to the Federal Employees Health Benefits Program, which could provide up to 250 alternatives, with a minimum of 11 plans for rural areas and dozens for metropolitan areas.

These were also among the 15 panel recommendations: