What’s it like when a parent goes to war? 9-year-old boy tells all Young author Davidson Whetstone is pictured with his book ''Brave for My Family,'' illustrated by his Green Beret father, which was published in early November. The 9-year-old hopes the book will help other military children not be scared when their parents deploy to war zones. (Whetstone Family)

Young author Davidson Whetstone is pictured with his book ''Brave for My Family,'' illustrated by his Green Beret father, which was published in early November. The 9-year-old hopes the book will help other military children not be scared when their parents deploy to war zones. (Whetstone Family) 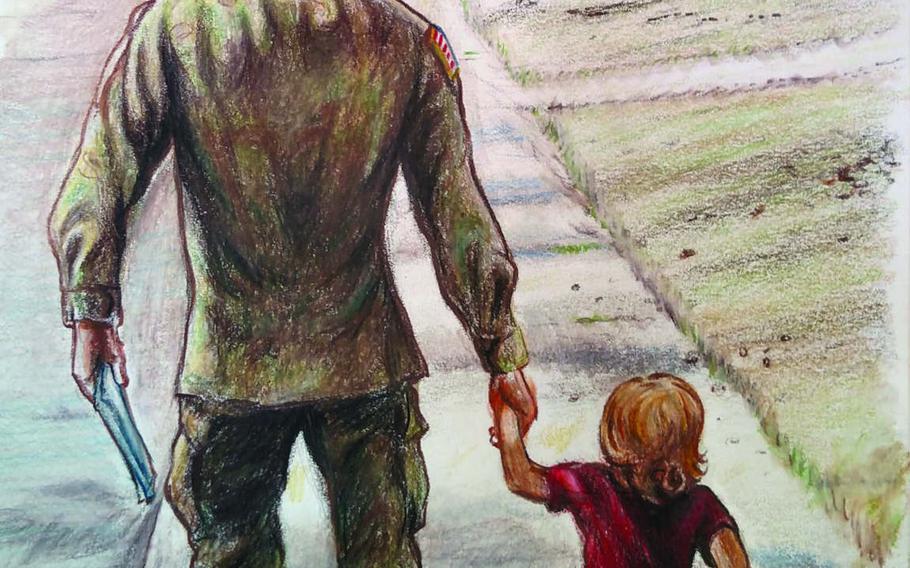 An illustration from the book ''Brave for My Family,'' drawn by Green Beret officer Dave Whetstone, depicts the soldier with his son Davidson — the book's author, who was 3 at the time — before he deployed to Afghanistan in 2013. (Dave Whetstone) Davidson Whetstone and his Green Beret father Dave, author and illustrator, respectively, of the new book ''Brave for My Family,'' are depicted in this illustration praying. (Dave Whetstone) The moment when 3-year-old Davidson Whetstone hugged his combat-wounded father at Walter Reed National Military Medical Center in 2013 is depicted in this illustration from a book Davidson wrote when he was 6. Davidson's father illustrated the book, which was published last month. (Dave Whetstone) 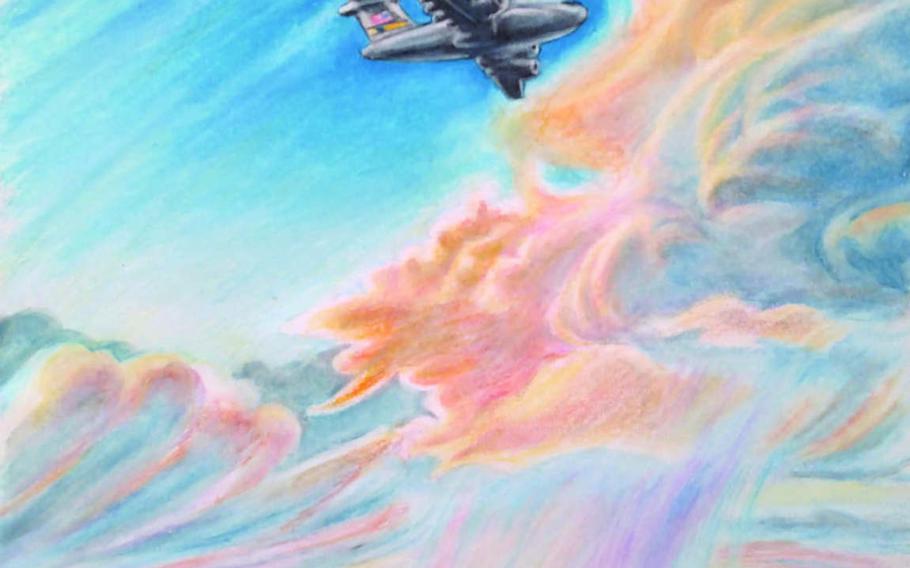 An illustration from Davidson Whetstone's book shows a military aircraft taking his father, Dave, back to Afghanistan on a Special Forces deployment after recuperating from wounds he received in combat in 2013. (Dave Whetstone)

The 9-year-old son of a Green Beret has written a children’s book that gives a glimpse of what military families experience when their loved ones go off to fight, as his father nears the end of his 10th deployment.

Titled “Brave for My Family,” the book tells the story of the Christmas six years ago that young Davidson Whetstone spent with his father, Dave, who was recuperating at Walter Reed National Military Medical Center in Bethesda, Md., after being wounded in a rocket-propelled grenade blast in Afghanistan. Whetstone is a pen name to protect the Special Forces soldier and his family.

Since its release on Veterans Day, the book has risen to No. 1 in Amazon’s “children’s American history of the 2000s” category.

Now a third grader, Davidson had just finished kindergarten when he began writing “Brave for My Family,” working with his father, who illustrated the book.The two saw the project as something that would give courage to other military children when their parents deploy, the family has said. Some of the proceeds from sales of the book will go to nonprofit organizations, such as the Green Beret Foundation, that support Special Forces and special operations troops’ families.

An active-duty Special Forces officer, Dave Whetstone has deployed eight times since the birth of Davidson, the oldest of his four children, and 10 times overall. He was serving in Afghanistan on one those overseas tours when shrapnel from an RPG explosion tore through his right side, just missing one of the main arteries in his neck and damaging his right eye. As he was rushed first to a hospital in Landstuhl, Germany, then to Walter Reed, his wife flew the family to Maryland to be with him, arriving on Christmas Day 2013. Davidson was 3 at the time.

“My mom cried, and I was pretty scared that my dad was going to die,” Davidson writes in the book.

A drawing depicting the father and son reunion at the hospital shows the bearded Green Beret’s back and right arm pockmarked with fresh wounds, his eye bandaged, as he hugs a smiling Davidson.

“I hugged him because I was so happy he was alive,” the boy writes.

The book recounts the weeks the family spent together in Washington, D.C., as Dave Whetstone healed, until the Green Beret decided to return to battle.

“While my Dad was in the hospital, the terrorists killed his friend in Afghanistan, so he had to go back to fight them,” Davidson writes. “I felt so sad and angry.”

While his father’s away, Davidson tries to stay brave, he writes in the book, which includes tips on how to support military kids and families like his.

“I like to draw pictures for him,” Davidson said by phone this week. Sometimes his Lego creations or stuffed animal friends deploy with his father and appear in videos Dave Whetstone records of himself reading to his children, or in video calls to the family.

The sacrifice of time away from his family rivals the pain of being wounded or losing comrades in battle, Dave Whetstone said in an email.

“Some of the toughest pills to swallow are not being there for first words, first steps, first Christmases, first birthdays, and all of the moments that I’ll never see again,” he wrote. “The hardest thing is watching my kids grow up in pictures.”

Although the family was apart for Thanksgiving, the Green Beret is expected home for Christmas.

Often, when he’s nearing the end of a deployment, Dave Whetstone considers the costs he and his colleagues — and their families — have paid over nearly two decades of war, he said.

“I think about friends who are gone, things I’ve had to do in war, and the memories my family [members] have that I won’t be in,” he said in an email.

“One of the tough aspects of this line of work is that lasting accomplishments can often be fleeting, but the pang of sacrifice remains long after history’s moved on.”