‘We are all angry:’ Female veterans take action after Spc. Vanessa Guillen’s death to stop discrimination in military 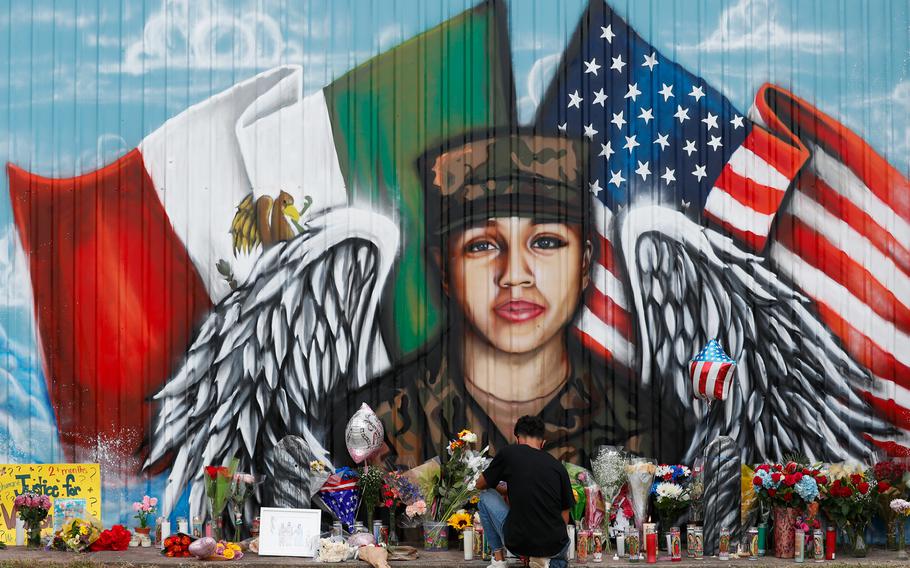 AUSTIN, Texas — No justice, no enlistment.

That’s the call from a group of female veterans in the wake of the slaying of Fort Hood soldier Spc. Vanessa Guillen, whose remains were found mutilated and buried at the hands of another soldier miles from the central Texas base where she served.

Guillen, 20, was killed April 22 during the workday in an arms room at the base. Her body was moved in a plastic box from the base and hidden near a river more than 20 miles away, according to federal court documents. One suspect, a fellow soldier, is dead, and another is in federal custody. Her remains were found June 30 and confirmed as hers by the Army on Monday.

“We are all angry and we all want to see change,” said Stephanie Gattas, a Navy veteran in San Antonio.

Gattas joined a group of 20 female veterans to write a letter outlining demands to improve the “systemic failures” that they claim led to a military in which victims of sexual harassment are afraid to report other service members and an Army in which a soldier can be murdered on base and it takes more than two months to solve the crime.

“It is our job as women veterans to support our sister in arms at this time. Although her death was tragic, it’s leading to change,” Gattas said. “This is in the name of all those men and women who have not been able to come forward and detail their sexual assault. This is for the women of the past who have been murdered and raped who have not been able to tell their story. For all those women and men who are still not accounted for.”

The women want an enlistment boycott until their demands are met. They are calling “for young Americans to refuse to enlist or accept a commission into any branch of the armed forces until these demands are met and the systemic problems with sexual assault and sexual harassment in military culture are effectively addressed,” according to the letter.

The demands, which match those made by Guillen’s family, include a congressional investigation into the circumstances of Guillen’s disappearance and the firing of the soldier’s entire chain of command, including the Fort Hood commander. They also want the sprawling Army base to be closed. More than 36,000 service members are assigned to the base, according to its public affairs office.

“For over two months, the disturbing circumstances surrounding Spc. Guillen’s disappearance and the environment of sexual harassment she endured in her unit prior to her murder have gripped the attention of various communities across the country and incited a resounding need for the utmost accountability and attention,” according to the letter, which is addressed to Defense Secretary Mark Esper, Army Secretary Ryan McCarthy and leadership in Congress.

Gattas said she knows the demands and the descriptions of gender and racial discrimination in the letter are controversial.

“We have to remove ourselves from our comfort to see change. We can’t move the needle forward if we don’t talk about it,” she said.

More than 3,000 female veterans have signed the letter since it was released online Saturday. The group continues to collect signatures and will send the letter after they have vetted each woman’s military service, said retired Marine Corps Staff Sgt. Tristeza Ordex-Ramirez, another veteran behind the letter.

The service of LatinasThe League of United Latin American Citizens, known as LULAC, has made a similar call to boycott military enlistment. Domingo Garcia, national president of the group, issued “a predator alert for families” and he said they should not allow their “daughters to enlist in the Army, since we see they cannot be protected.”

“I encourage every young girl out there who’s thought about joining the military to stand up and say, ‘You will not have me until [Guillen] gets justice,’” Ordex-Ramirez said.

It’s a call she said she doesn’t make lightly, because she is proud of her service and the life that it created for her. Similar to Guillen, she is the daughter of Mexican immigrants.

“Growing up, we worked in the fields,” said Ordex-Ramirez, who lives in Orlando, Fla. “That’s what my family did. I would see these older Mexicans out there picking berries in the freaking heat in the middle of the summer and it broke my heart.”

It was then that she decided she had to do something in her life to pull her family out of poverty and provide for her parents. So she enlisted in the Marines.

Hispanic women who join the military are more likely than other groups to use the resources afforded them through military service to move themselves from poverty into the middle class, said Harry Franqui-Rivera, an associate professor of history at Bloomfield College in New Jersey. An Army veteran, his research includes Hispanic military service.

“I think it’s really important to understand that Latinas, they actually move up through the ranks faster than Latino males,” he said. “Even those that go through the Reserve or National Guard path, they improve their socioeconomic [standing] substantially.”

Though that service isn’t without a price.

“I have interviewed veterans from different wars. The majority of them say they experienced racism mostly because of accented English or having trouble speaking in English,” Franqui-Rivera said, noting he also experienced racism in the Army. “All say it was difficult to navigate a different culture. Not just the military, but a military that is also white.”

About 16% of soldiers in the active-duty Army identify as Hispanic, according to a 2019 report by the service on its demographics. About 15% of soldiers are women.

The system fails victimsOrdex-Ramirez said when she reported her own sexual harassment in the Marine Corps, she had to tell her story over and over to white men. The first man, her gunnery sergeant, said, “Maybe you shouldn’t look so good.”

“That is not a proper response,” Ordex-Ramirez said. “That experience made me not ever want to say anything again.”

The boycott is a “good way of recognizing, ‘You need us. We’ve been serving and we need to be protected’,” Franqui-Rivera said.

Once the Army responds positively, he said he believes LULAC will go back to supporting military service.

The women behind the letter agree.

“We are going to witness a very pivotal turn in history for everything being brought to the forefront today,” said Gattas, who has worked with victims of military sexual trauma through the nonprofit that she founded, the Pink Berets. She’s been disheartened during the years to see women who’ve fought for decades to change the systemic issues of the military that allow for sexual harassment to continue in the ranks. But Gattas said she’s hopeful that this is the moment for change.

Despite years of increased training and awareness campaigns for the military’s Sexual Harassment/Assault Response and Prevention Program (SHARP), the Pentagon reported there were 7,825 sexual assault reports involving service members as victims or subjects in 2019. That was a 3% rise from the previous year. The military received 1,021 formal sexual harassment complaints, a 10% increase from 2018, according to the Pentagon report on the subject released in April.

Some credit for the increase is given to victim confidence in reporting, military officials have said. But results of the most recent Defense Department Workplace and Gender Relations Survey of Active Duty Members showed the estimated prevalence of sexual assault rose in the Army to 6,500 soldiers in 2018, compared to 5,200 estimated in 2016. Because the report is conducted every other year, the increase cited in the 2019 report can’t be characterized as an increase in assaults, according to the Pentagon.

Fort Hood commanders and investigators with the Army Criminal Investigation Command maintain they have found no credible evidence to link Guillen’s death with sexual harassment. Vanessa Guillen’s family said the soldier told her mother and sister that she faced sexual harassment in her unit.

To have an effective program that tackles sexual harassment and assault, there needs to be continuous evaluation and process improvement, said Nikki R. Wooten, an associate professor at the University of South Carolina College of Social Work and lieutenant colonel in the Army Reserve. Her research work focuses on military behavioral health services and racial and gender differences.

“As a static program, SHARP will not be effective in the long term. As technology advances and the Army adapts to changing units, soldiers and social environments, SHARP must be adapted to remain military-relevant and effective,” she said. “Hopefully, the Guillen case will result in the U.S. Army developing better methods of SHARP reporting that protects confidentiality and encourages reporting, which could include SHARP reporting mechanisms outside of the chain of command at the installation and unit levels and perhaps at [the Defense Department] level.”

Sometimes it’s not just a fear of reprisal that keeps a soldier from reporting harassment, but the possible perception of betraying the Army family, Wooten said. For junior enlisted soldiers, the Army offers a sense of belonging and security they might not have experienced prior to military service.

“In military units, loyalty and emotional bonds are strong and intense and the sense of purpose to something greater than oneself is unlike any other life experience,” Wooten said. “Just like in families of origin, when negative behaviors are perpetrated upon the young and/or lower ranking, the perception may be that there is less incentive to report and/or betray the familial group for fear of losing their support and approval.”

Just contemplating a report can cause a soldier emotional distress, she said. That is compounded when a soldier is young, enlisted and a minority, both in race and gender.

#IAmVanessaGuillenThe demands within the letter are bolstered by the hundreds of veterans who have taken to social media through the #IAmVanessaGuillen campaign to share their own stories of sexual harassment and assault while serving in the military.

The Service Women’s Action Network has also called on its members to “harness this momentum to demand institutional changes within our military.”

“Vanessa’s disappearance highlights a multitude of systemic problems within the military’s culture and the military justice system,” according to a letter sent by the organization to its community.

Among its recommendations on how to generate change, was a call to contact the Senate and House Armed Services committees to request an independent investigation into the handling of Guillen’s disappearance, full accountability of any military leaders found negligent in their handling of the case, and to pass the Military Justice Improvement Act, which replaces the role of the commander with a trained prosecutor when it comes to determining whether to charge a service member with a crime.

“I want other young Latinas like me to [say], ‘I want to serve my country and give everything,’” Ordex-Ramirez said. “I want that for them. But it’s not going to happen unless this family gets justice.”