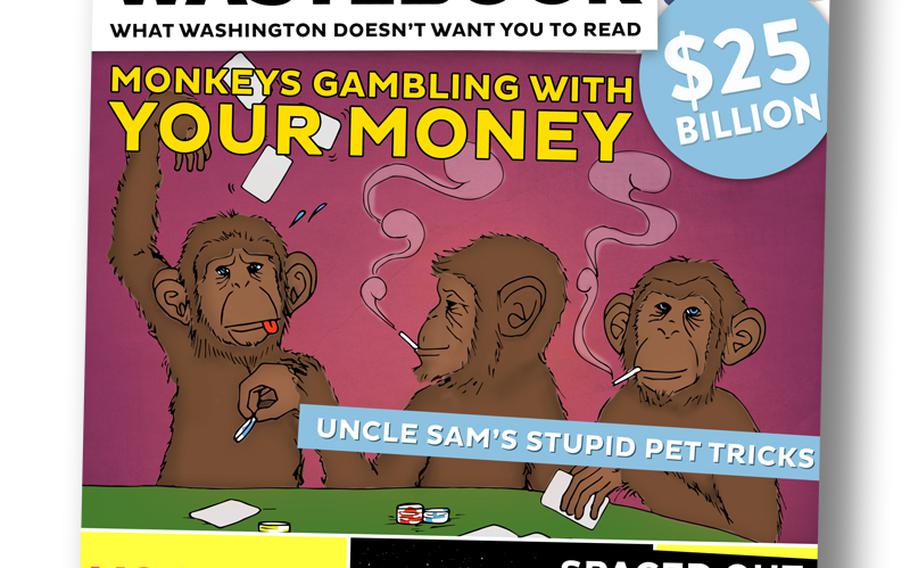 Cover of the Wastebook 2014, which details the "most outlandish government spending." (coburn.senate.gov)

WASHINGTON — Exploding military sleep apnea claims, Afghanistan buildings that keep burning down and the Navy’s Currents magazine have all made one of Congress’ most notorious lists of wasteful government spending.

Sen. Tom Coburn’s annual Wastebook, released Wednesday, listed those defense costs and others among 100 initiatives worth $25 billion that he says were conducted by a Department of Defense and federal government with too little oversight and a Congress that often serves “purely parochial, political” goals.

“Only someone with too much of someone else’s money and not enough accountability for how it was being spent could come up some of these projects,” Coburn, R-Okla., said in a released statement.

Servicemember disability claims for sleep apnea, a condition that reduce the amount and quality of sleep in sufferers, have increased from less than a thousand in 2001 to 143,000 now, which costs taxpayers $1.2 billion annually, according to Coburn’s final waste report.

The Department of Veterans Affairs, which handles claims, has attributed the rise in cases to greater awareness of sleep apnea, which can increase the risk of high blood pressure, heart attack, stroke, obesity, and diabetes, according to the National Institutes of Health.

But Coburn said many are beginning to question the prevalence and have even alleged that troops preparing to separate are advised to claim sleep apnea just to reap a high disability rating and increased benefits.

“Current VA policy rates someone with sleep apnea to have a rating of 50 percent, meaning fifty percent disabled,” according to the waste report. “By contrast, Rep. Tammy Duckworth [D-Ill.], who served in the Army as a helicopter pilot, lost both of her legs in combat and had her right arm blown off. After the arm was reattached, her disability rating by the VA was 20 percent.”

Duckworth’s staff said Wednesday that the 20 percent rating was only for the loss of her arm.

Specially appointed auditors learned two years ago that buildings constructed by the Army Corps of Engineers used faulty fire suppression systems that did not conform to international building codes.

Some buildings burned but work on new buildings continued as part of the $21.3 million construction effort, and the problem was not fixed. Last year, 704 were underway using the same foam and thermal barriers found to be faulty.

The buildings are being turned over the Afghans, despite the hazards.

“According to a senior Army Corps official, turning the buildings over was fine because ‘the typical occupant populations for these facilities are young, fit Afghan soldiers and recruits who have the physical ability to make a hasty retreat during a developing situation,’” the Wastebook said.

Meanwhile, the Navy took some fire for its glossy Currents magazine, which focuses on the service’s green energy efforts.

Currents articles published through the year included a buying guide for products classified as environmentally sustainable and a feature on winners of a Navy environmental stewardship award, according to the senator.

“Yet for all its efforts to showcase itself as the ‘Great Green Fleet,’ the Navy still mails out 9,500 hard copies of the magazine every quarter, including 535 to each member of Congress,” the Wastebook said.

Coburn’s report, which questioned whether the magazine is “self-aggrandizing propaganda,” said the mailings cost $72,000 per year on top of the $260,000 cost of producing the magazine.