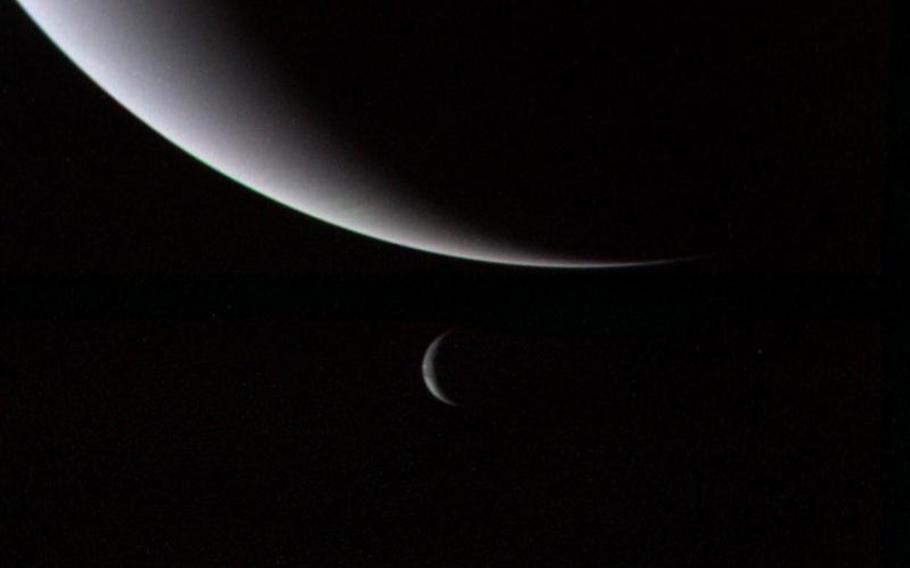 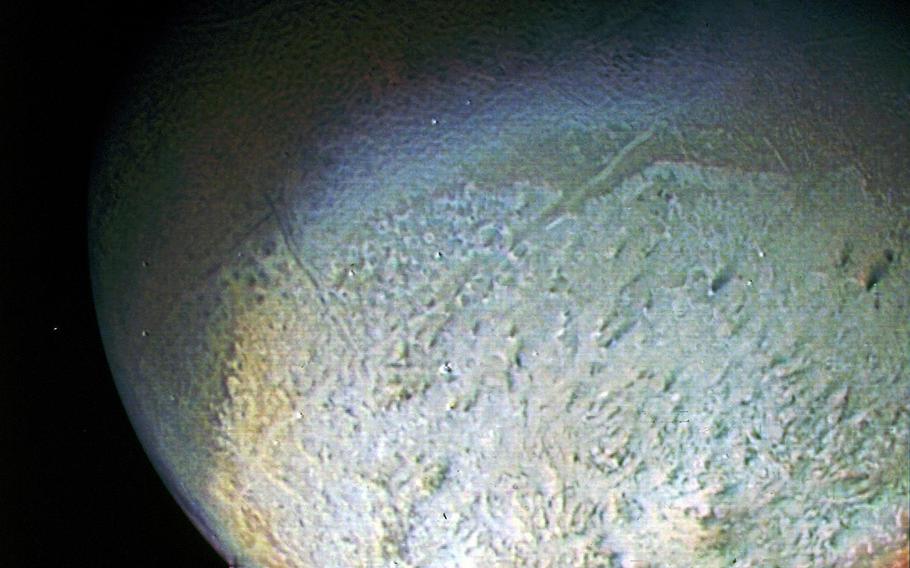 A color photo of Neptune's largest moon Triton, taken on Aug. 24, 1989. Voyager 2 was 333,000 miles away from Earth at this point. The image was made from pictures taken through the green, violet and ultraviolet filters. In this technique, regions that are highly reflective in the ultraviolet appear blue in color. In reality, there is no part of Triton that would appear blue to the eye. (NASA) 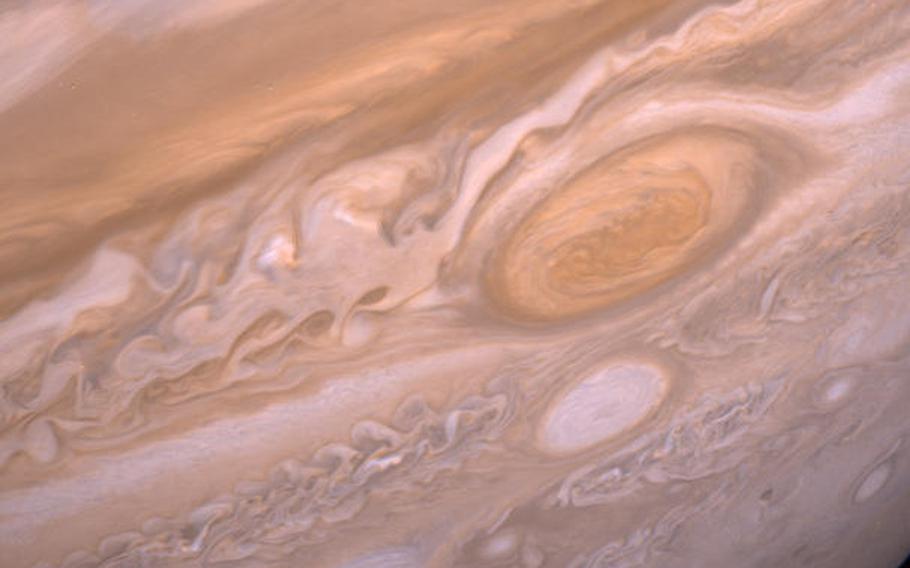 Two storm systems on Jupiter are in the frame of this 1979 photo taken by the Voyager 2 spacecraft. The larger, red spot is known was the Great Red Spot. (NASA) 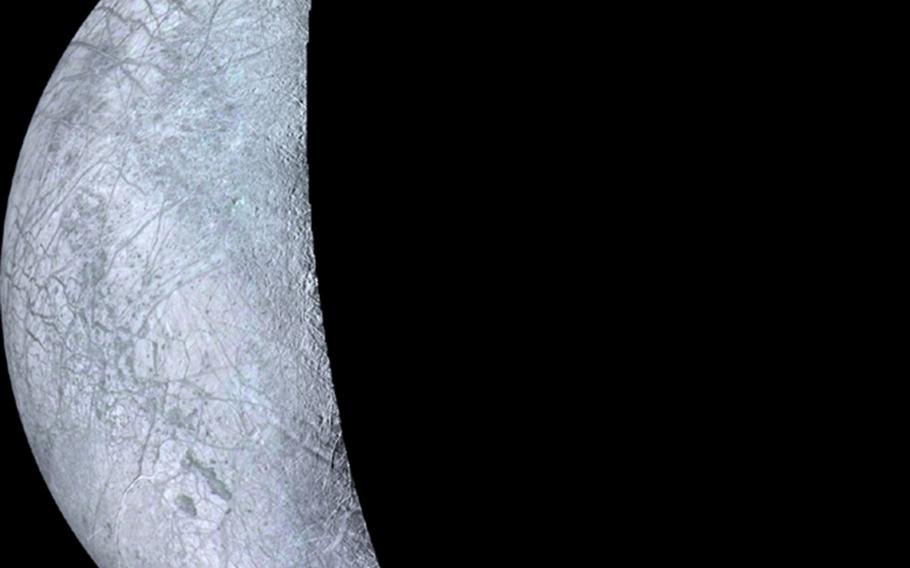 The Voyager 2 caught this crescent shot of Jupiter's Europa while passing by in 1979. Europa is the fourth largest of the planet's moons, and just slightly smaller than Earth's moon. Scientists speculate Europa could contain liquid water at around 50 kilometers below the surface. (NASA) 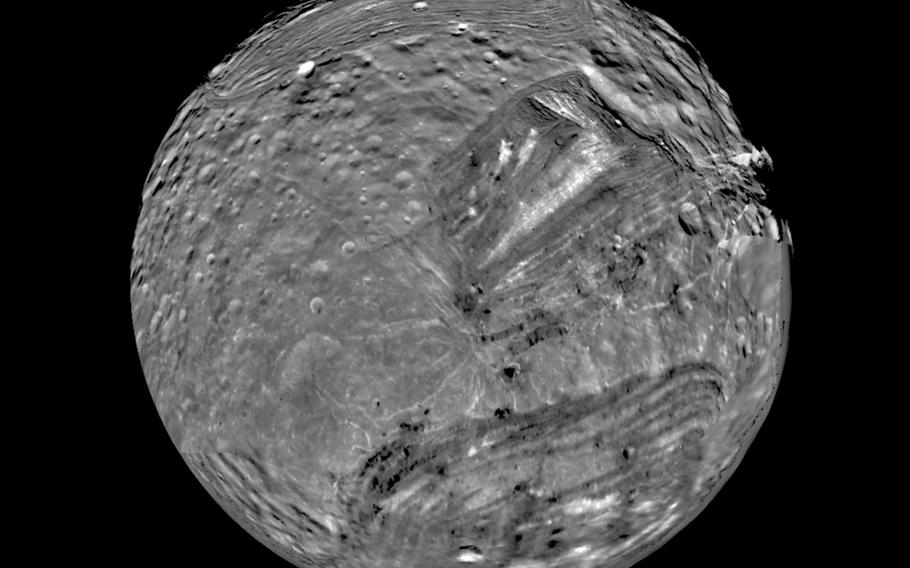 Miranda, the smallest of the five major satellites orbiting Uranus, is shown in this computer-assembled mosaic of images sent by the Voyager 2 spacecraft in early 1986. (NASA) 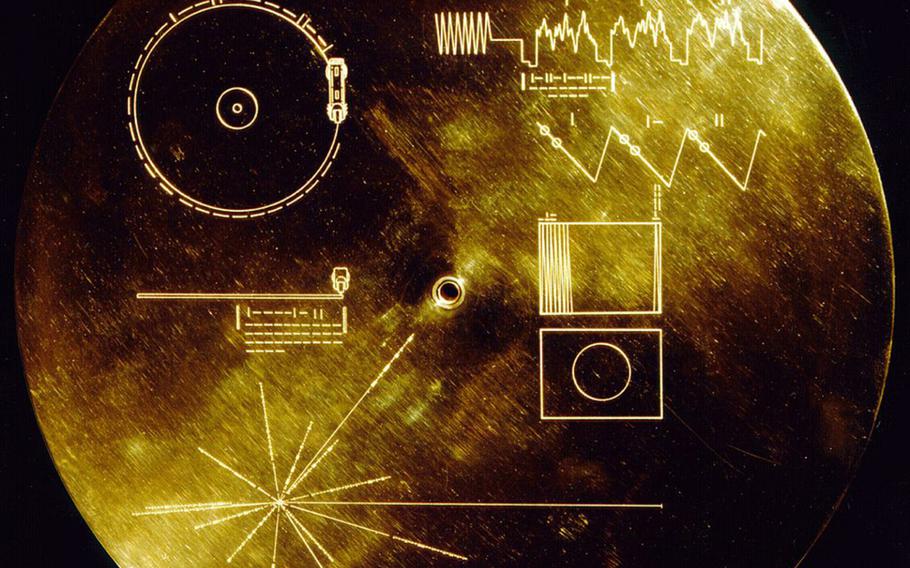 The gold aluminum cover placed over the Voyager 1 and 2 "Sounds of Earth" records that carry the story of Earth far into deep space. The cover protects the records from micrometeorite hits and provide the finder clues on how to play the record. (NASA) 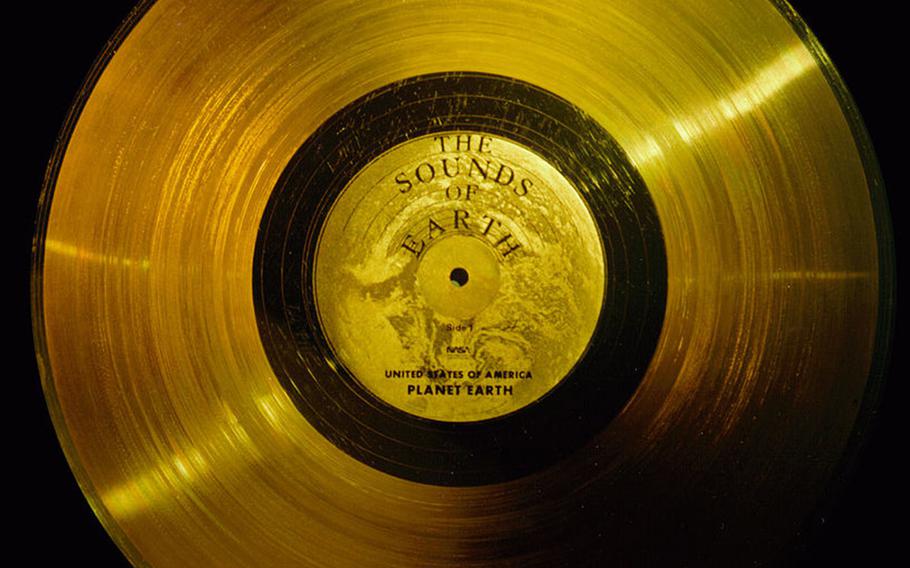 The gold-plated copper records carried on Voyager 1 and 2 carry the story of Earth into deep space. The discs contain greetings in 60 languages, music samples, as well as natural and man-made sounds from Earth. (NASA) 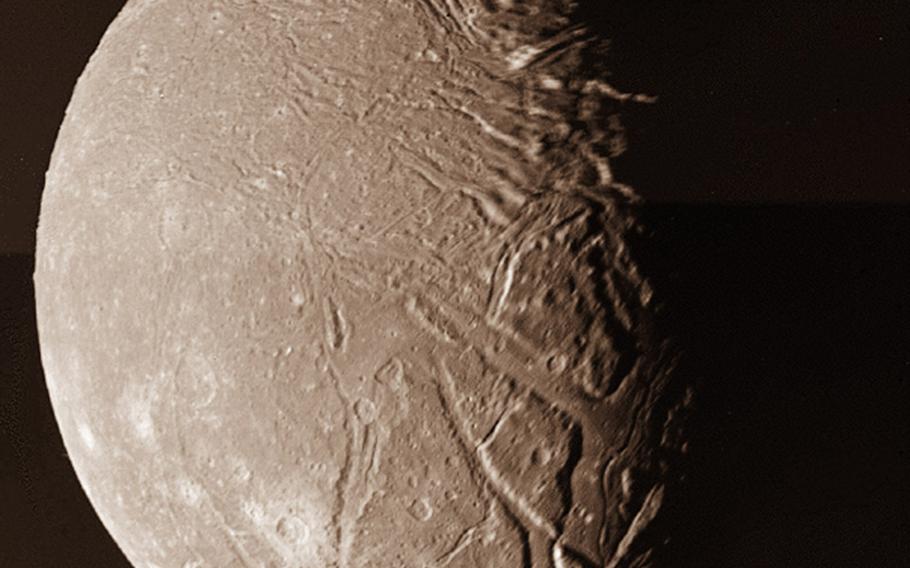 Voyager 2 send this picture of Ariel, one of the satellites orbiting Uranus, in January 1986. Ariel is composed of about half water ice and half rock. (NASA) 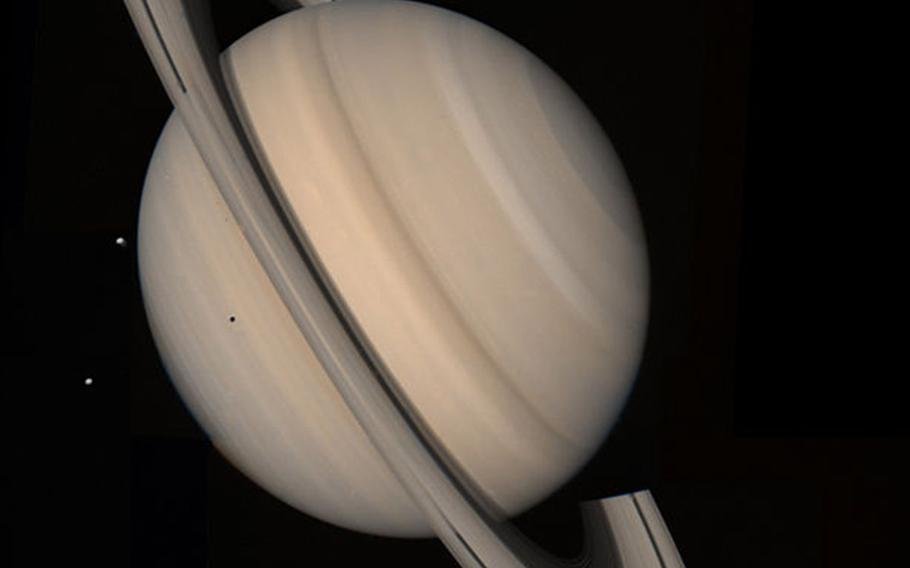 Voyager 2 snapped this true color image of Saturn from a distance of 13 million miles on Aug. 4, 1981. Three of the planet's moons are seen to the left, they are Tethys, closest, Dione and Rhea. (NASA) 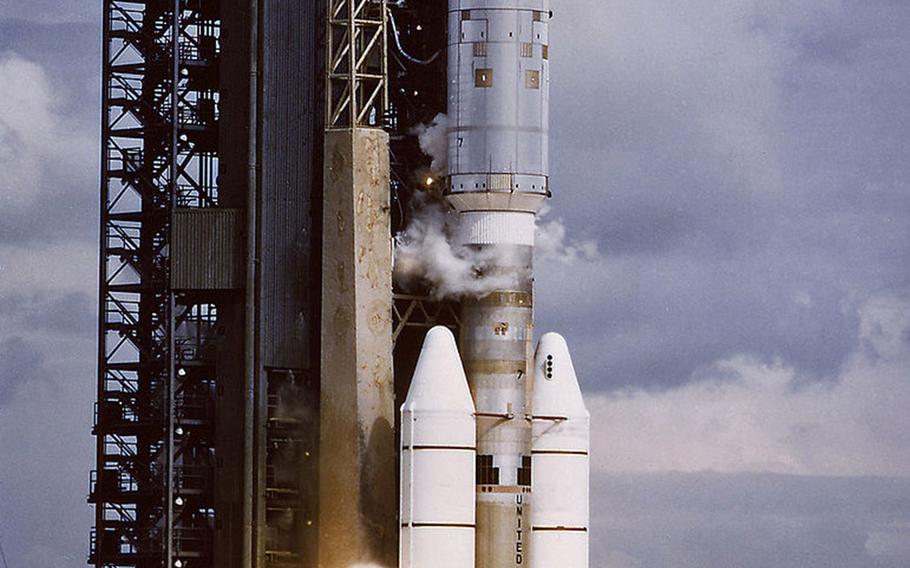 Voyager 2 is launched aboard the Titan III-Centaur vehicle, which lifted off on Aug. 20, 1977. The Voyager 2 was launched ahead of Voyager 1, but Voyager 1 had a greater speed, and eventually passed it in distance from Earth. (NASA) 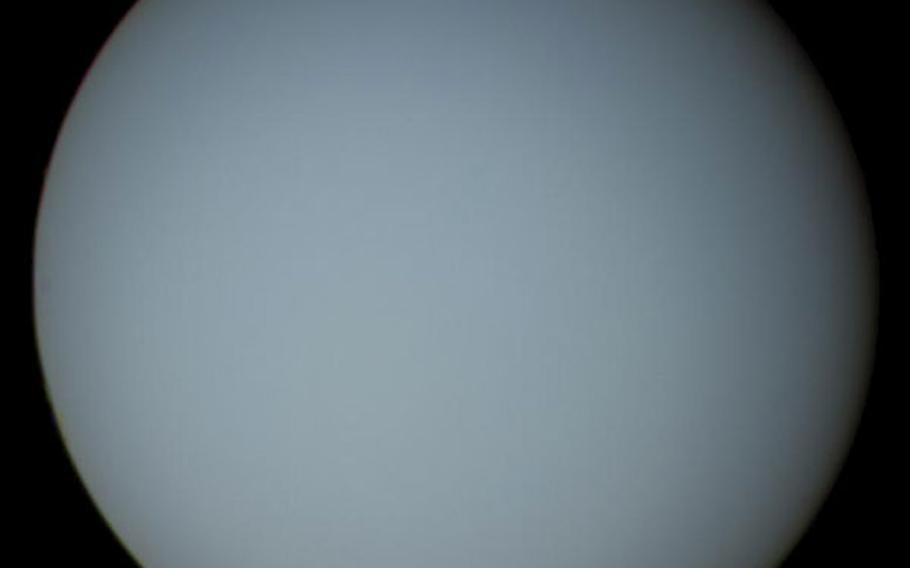 A composite image of Uranus as it would be seen by the human eye was made from images sent by Voyager 2 on Jan. 17, 1986. The Voyager 2 was 5.7 million miles from the planet. The picture is a composite of images taken through blue, green and orange filters. (NASA) 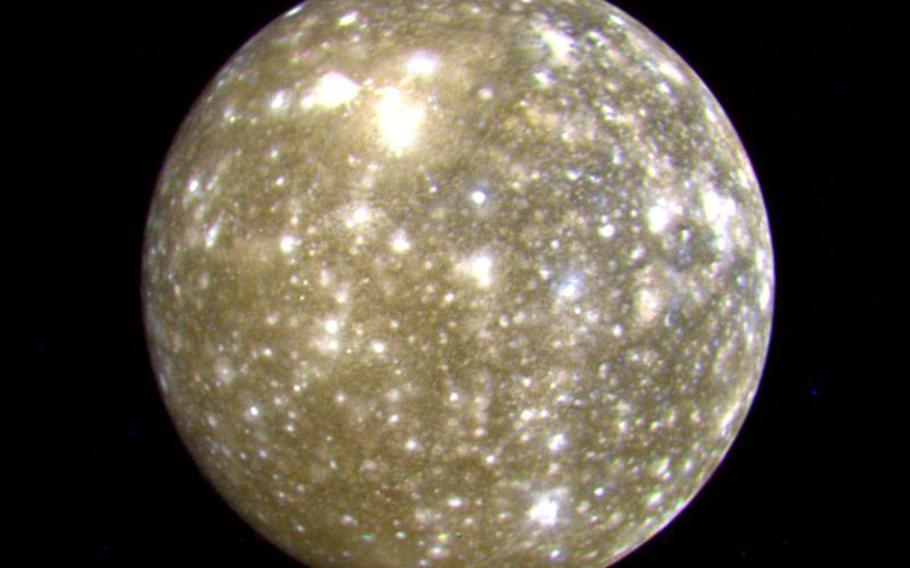 Voyager 2 provided the images used to make this false-color rendition of Callisto, a satellite of Jupiter, on July 7, 1979. Callisto is one of the most heavily cratered of Jupiter's moons, and resembles Mercury and Mars in that way. (NASA) 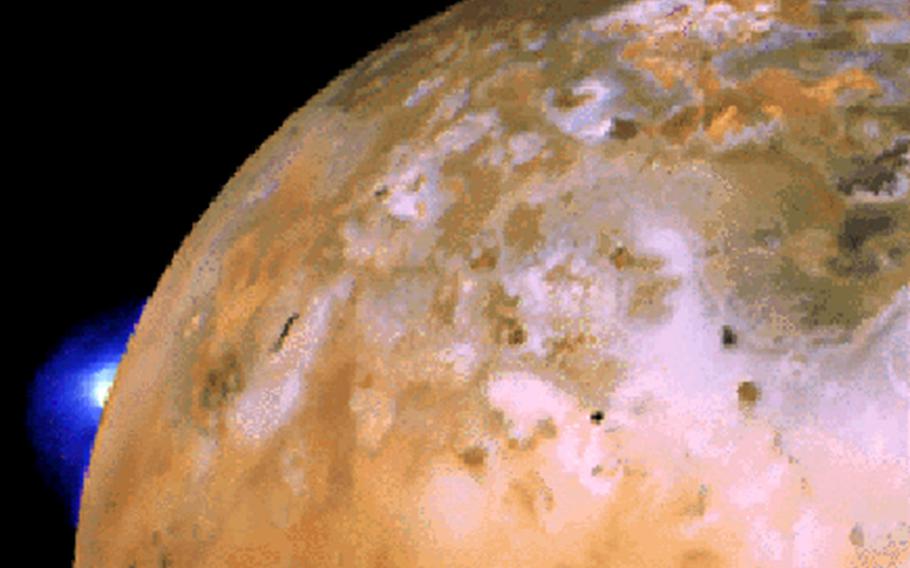 Voyager 2 captures an eruption on the Jupiter's satellite lo. Scientists at NASA called the discovery of active volcanism on Io, "the greatest surprise of the entire Voyager mission. It was the first time active volcanoes had been seen on another body in the solar system." (NASA) 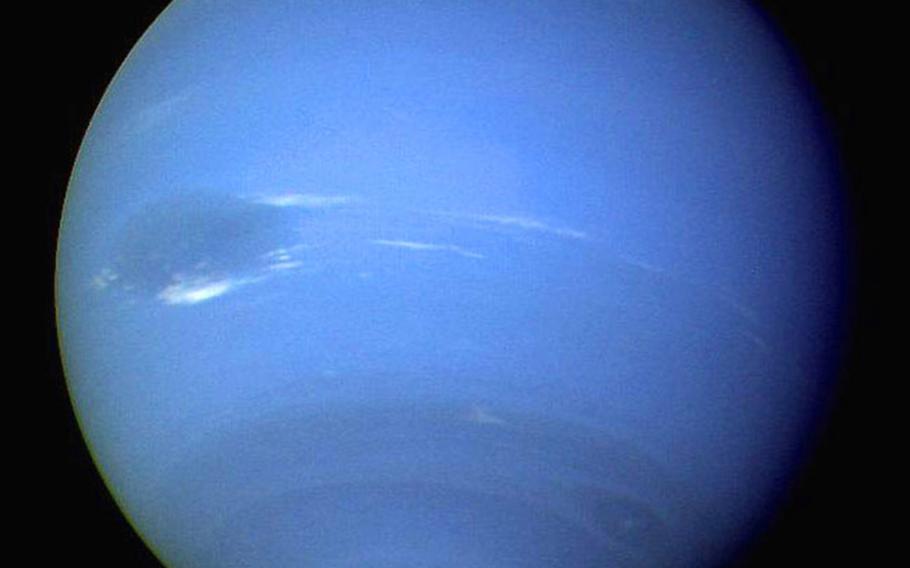 Voyager 2 took photographs of Neptune almost continuously during Aug. 16-17, 1989. It was discovered that the dark spot, seen in the middle left of the planet in this image, circled the planet every 16.1 hours. (NASA) 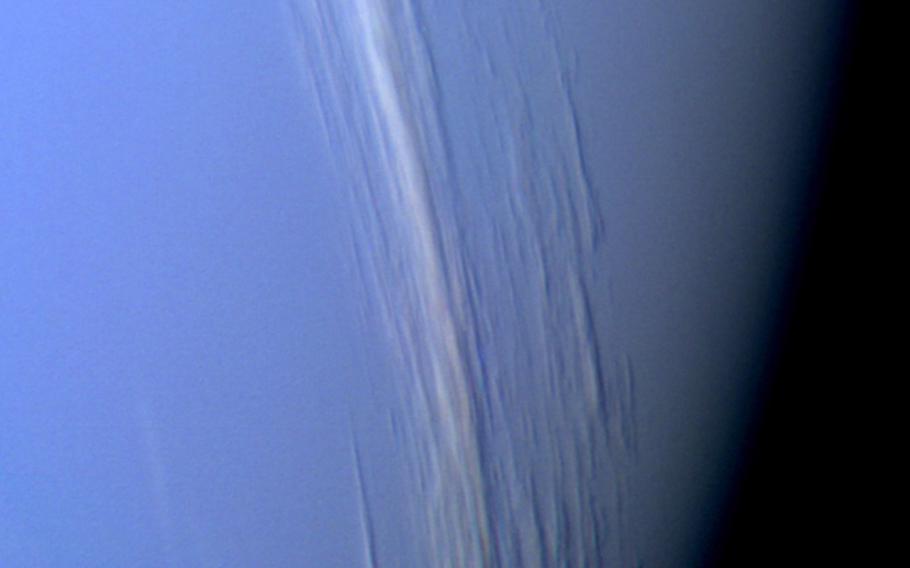 Voyager 2 snapped this close-up shot of Neptune in Aug. 1989. The shadow of the white clouds indicates a great distance between the top cloud layer and the underlying clouds. NASA says the white clouds appear to reach about 31 miles up. (NASA) 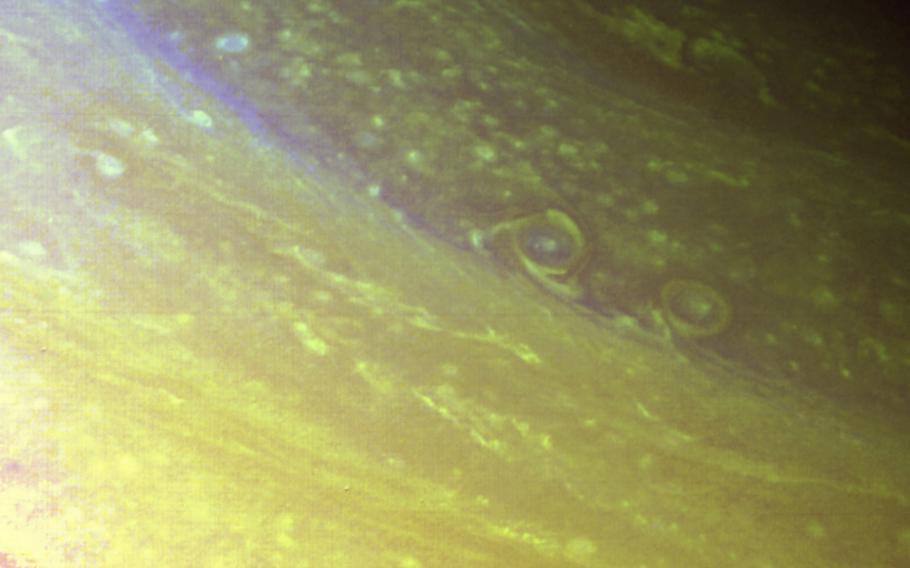 Voyager 2 snapped this image of the Saturn's northern polar region on Aug. 25, 1981. The image shows many bright, small-scale cloud spots, the smallest of which are 10 miles across. (NASA) 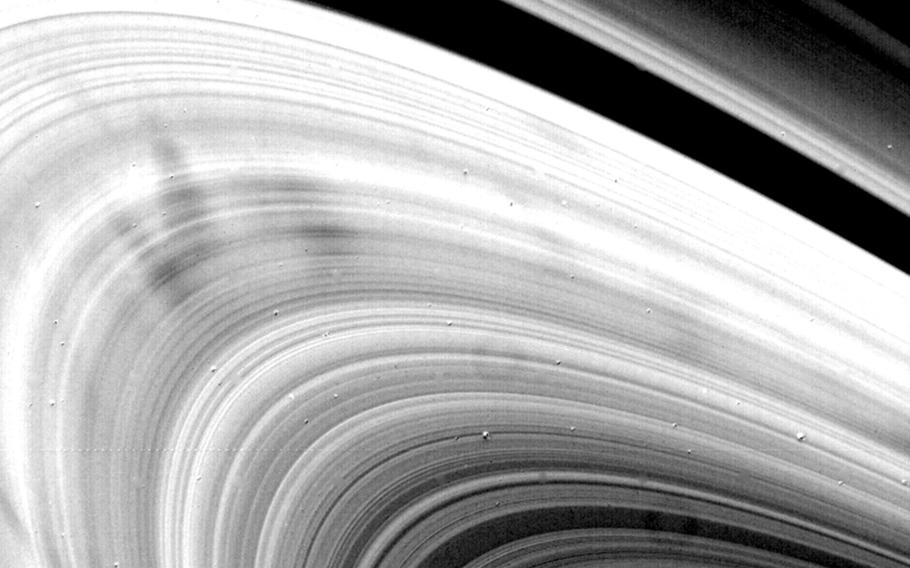 Voyager 2 sent back this high-resolution image of Saturn's rings on Aug. 22, 1981. At this point, the spacecraft was 2.5 million miles away from the planet. (NASA)

On Aug. 20, 1977, Voyager 2 began an adventure that would lead it to interstellar space. The NASA-built craft would cross paths with the giants Saturn and Jupiter — catching glimpse of the first-ever observed volcanic activity outside of Earth, and eventually become the only spacecraft to visit Uranus and Neptune.

Like its sibbling, Voyager 1, the spacecraft is also an ambassador. It carries a 12-inch copper record of greetings in dozens of languages, samples of music and sounds both man-made and natural. To mark the spacecraft's incredible 37-year journey so far, enjoy this gallery of some of the best images it returned on its voyage away from our Solar System.