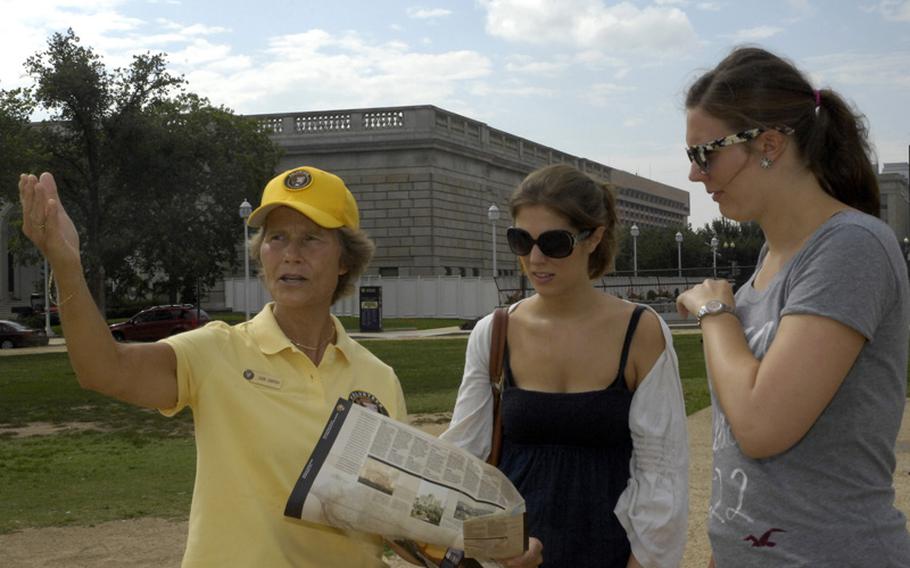 Joan Darrah, a retired Navy captain and a volunteer roving docent, assists tourists in need of direction and information on the National Mall in Washington, D.C. (Carlos Bongioanni/Stars and Stripes)

Joan Darrah, a retired Navy captain and a volunteer roving docent, assists tourists in need of direction and information on the National Mall in Washington, D.C. (Carlos Bongioanni/Stars and Stripes) 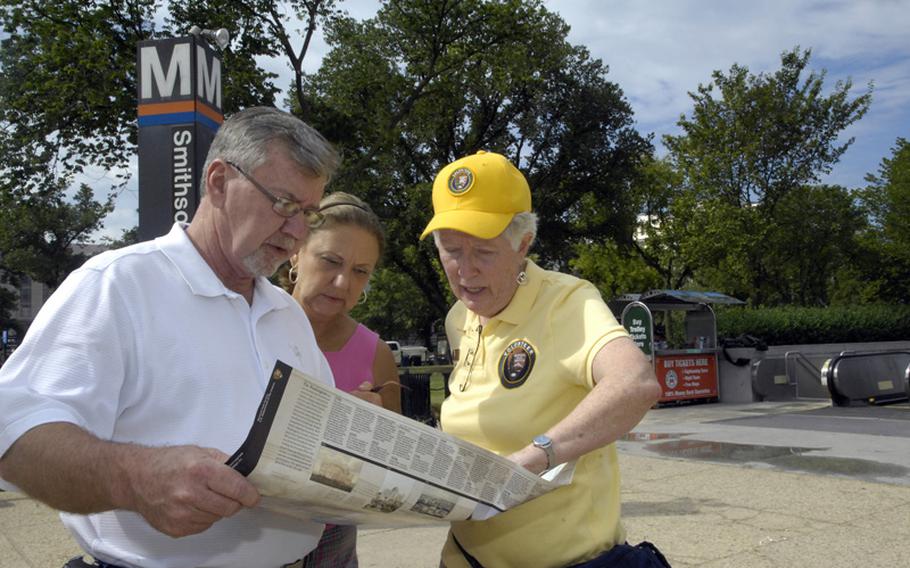 Lynne Kennedy, a volunteer roving docent, assists tourists in need of direction and information on the National Mall in Washington, D.C. (Carlos Bongioanni/Stars and Stripes)

This story has been updated and clarified.

WASHINGTON &mdash; Emerging from an underground Metro station, the visitors file onto the historic National Mall. Many are disoriented, not sure which direction to set out.

But there to help them find their bearings are two volunteers known as roving docents or instructors.

One woman, intending to go to the Capitol building, starts walking to the left and points, saying &ldquo;it&rsquo;s that way, right?&rdquo;

Nope, wrong way. One of the volunteer docents, retired Navy Capt. Joan Darrah, points in the opposite direction. &ldquo;The Capitol is over there.&rdquo;

With a constant flow of pedestrians passing to and fro, it&rsquo;s a typical day at the mall, which draws roughly 25 million tourists each year. They come from all over the world, many for the first time and many with no clue as to what is where.

To lessen the tourists&rsquo; possible sense of confusion and to make their trip more meaningful and enjoyable, the Trust for the National Mall has, over the past year, put in place a new program aimed at educating visitors on the Mall. The Trust's roving docent program currently has about 30 volunteers who received training and who have been assisting tourists on the mall for the past six months.

&ldquo;There is no better volunteer job than this,&rdquo; said Darrah, who retired from the Navy in 2002. Having been involved in what she terms a &ldquo;gazillion&rdquo; different volunteer positions, Darrah noted that there is no &ldquo;down side&rdquo; to being a roving docent on the mall. She said she delights in being active, having fun and &ldquo;making a huge difference in the quality of a tourist&rsquo;s stay.&rdquo;

Noting the success of the program so far, organizers now want to expand their base of volunteers.

&ldquo;Right now we&rsquo;re in the recruitment phase,&rdquo; said Caroline Cunningham, president of the Trust for the National Mall. &ldquo;Our goal is to have another 70 people on the national mall by the end of the year.&rdquo;

Those who would like to be part of the roving docent program are recruited through volunteer.gov, said Cunningham. Once recruited, the volunteers receive training, which takes place over four consecutive Saturdays. The training is a crash course on the history of the park, its memorials and monuments. The volunteers also receive training on customer service, security and first aid.

The training is free to the volunteers and is made possible by Boeing, which donated $85,000 towards the program.

&ldquo;When you think about what&rsquo;s happening down on the mall with this docent program, it&rsquo;s more than just providing a dollar gift,&rdquo; said Tom Bartlett who serves as a community investor for Boeing. &ldquo;It&rsquo;s about having this space come to life with docents who go around and impart learning to all the people who are coming to see this space.&rdquo;

Those recruited to be volunteers and who receive the training commit to serve eight hours a month, usually split into two, four-hour stints.

Cunningham said she hopes to draw from the large pool of active and retired military personnel who live and work in the D.C. area. &ldquo;It&rsquo;s a wonderful opportunity for military retirees who have time and want to volunteer,&rdquo; she said.

After expanding their base of volunteers, the Trust of the National Mall wants to do more continuing education on the past and living history of the park. And eventually, Cunningham said, &ldquo;as the program grows, we can then start offering free tours of the national mall and be much more supportive of the visitor experience.&rdquo;

Update/clarification: The Trust of the National Mall's roving docent program falls under the National Park Service's Volunteers-in-Parks program, which has been around since 1976 and is operated at national parks across the country.

More information about the Volunteers-in-Parks program, and how to apply