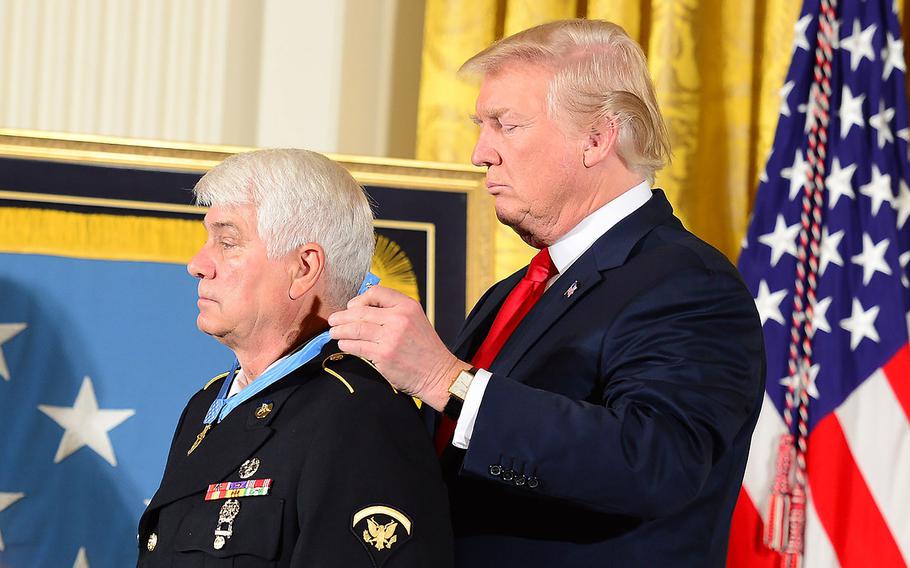 James C. McCloughan was awarded the Medal of Honor on Monday, July 31, 2017 in a ceremony at the White House in Washington. As a 23-year-old Army medic, McCloughan ran through fields of flying bullets repeatedly to retrieve and treat wounded comrades in the midst of a deadly two-day battle. (Eboni Everson-Myart/U.S. Army) 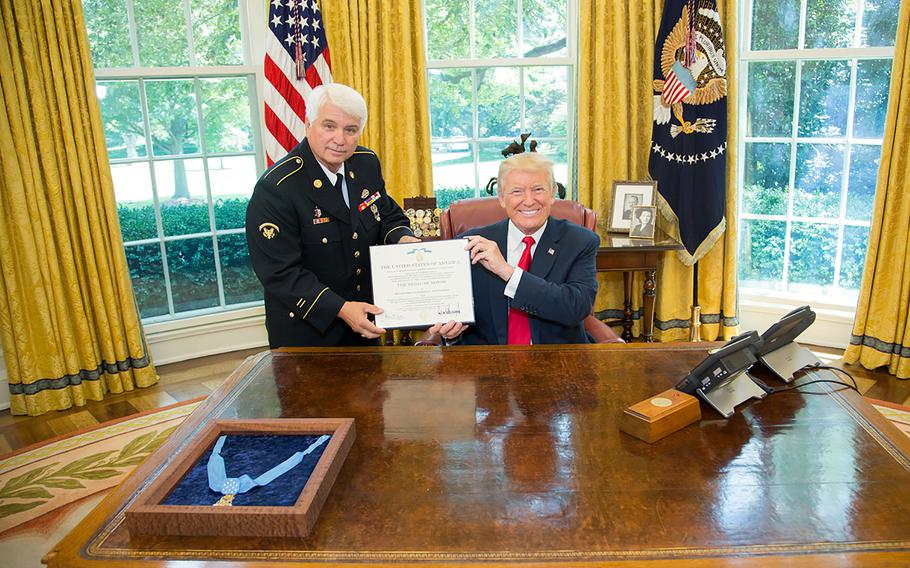 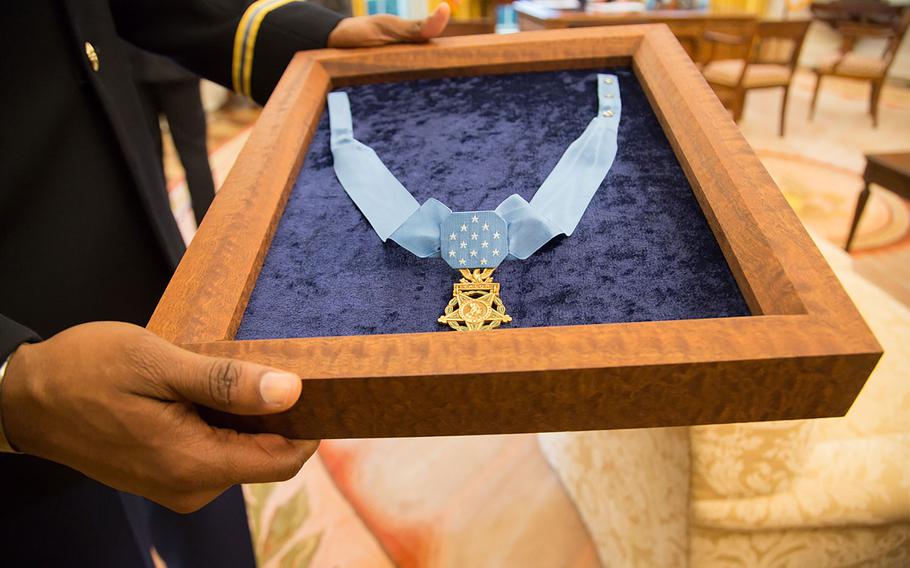 WASHINGTON — As a 23-year-old Army medic, James C. McCloughan ran through fields of flying bullets repeatedly to retrieve and treat wounded comrades in the midst of a deadly two-day battle. More than 48 years later, at 71, McCloughan was presented Monday with the top U.S. military honor.

The white-haired McCloughan stood stoic, dressed in the navy blue modern-day Army Service Uniform, as President Donald Trump placed the Medal of Honor around his neck before a large crowd gathered in the East Room of the White House. The former soldier offered a smile as he looked toward a row in the crowd where 10 of the men with whom he served in that 1969 battle stood clapping. McCloughan saluted.

Some of those men would not have been there Monday had McCloughan – known as “Doc” to them – not been alongside them through that battle at the base of Nui Yon Hill along the coast of central Vietnam, said Trump, who was overseeing his first Medal of Honor presentation as commander in chief.

“He would not yield. He would not rest. He would not stop. And he would not flinch in the face of sure death and definite danger,” Trump said. “In those 48 hours, Jim rescued 10 American soldiers and tended to countless others… I know I speak for every person here when I say that we are in awe of your actions and of your bravery.”

Following a North Vietnamese attack the previous day on their fire support base where four men were killed and two dozen more injured, McCloughan and his unit known as Charlie Tiger were ordered May 13 to assault an enemy position and seize Nui Yon Hill, according to Army records.

That battle, which would last into the early morning hours of May 15, was intense from its outset.

“The minute that we got there, we were fired upon,” McCloughan said in an Army interview, recalling the helicopter insertion of Charlie Company, 3rd Battalion, 21st Infantry, 196th Light Infantry Brigade, Americal Division. Unbeknownst to them, or their commanders who did not surveil the enemy force, they were 89 soldiers facing some 2,000 troops.

Two helicopters were quickly shot down as the battle begun. McCloughan and other members of his unit were tasked with finding one of the downed crews. The unit began taking casualties.

McCloughan — for the first of at least nine times over the next 48 hours — located a wounded soldier and darted forward through enemy fire.

“I jumped up, I weaved and sprinted through the fire and just slid in next to him like I was sliding into second base,” he recalled. “I threw him up fireman style and weaved my way through the crossfire, and just as I get through them, I heard this ungodly explosion.”

It was a rocket-propelled grenade, which sprayed McCloughan with shrapnel. He was bleeding heavily but he remained focused on his mission — getting the wounded soldier to the medical evacuation helicopter.

At the sight of McCloughan’s injuries, his platoon leader commanded him to evacuate with the wounded soldier. But the medic refused.

“You’re going to need me,” McCloughan, then a private first class, told his lieutenant. He would be wounded twice more by shrapnel and bullets during the battle, but his assertion to his commanding officer was right. “I would have rather died on that battlefield than learn later that one of my men had died on that field because their medic was not there,” McCloughan said Tuesday at the Pentagon where he was inducted into the military’s Hall of Heroes. “I wanted to save them all.”

The next day, the unit’s only other medic, Pfc. Daniel Shea, was killed carrying an injured soldier away from enemy fire. Shea would posthumously be awarded the Medal of Honor, which was presented to his family in December 1969, for his actions in the battle.

McCloughan continued to risk enemy fire to save his fellow soldiers – cradling one badly wounded soldier “like a baby” to keep his internal organs from spilling out of a stomach wound. When his unit ran low of ammunition, McCloughan volunteered to crawl forward with a blinking strobe to mark a location where a helicopter could drop supplies. “I literally could hear and see the bullets skipping off the ground that they were firing at me,” he said.

Before dawn the next morning, as McCloughan continued to treat two critically wounded soldiers, he spotted an enemy closing in with a rocket-propelled grenade. McCloughan said he managed to toss his own grenade, killing the enemy fighter just before he could fire at them. His unit was evacuated from the fight just after dawn.

Despite his injuries, McCloughan served another 10 months in Vietnam. He remained with Charlie Company conducting “search and destroy” operations for another five months before completing his tour working in a hospital clinic, he said.

He attained the rank of specialist 5 before returning to the United States, leaving the Army and returning to his original goal – teaching and coaching in his hometown of South Haven, Michigan. He spent the next four decades teaching sociology and psychology and coaching football, baseball and wrestling at South Haven High School.

Days after the savage battle at Nui Yon Hill, McCloughan was awarded the Bronze Star with “V” device for valor. In 2015, some of the men who served alongside McCloughan petitioned the White House to consider upgrading his award to the Medal of Honor.

The Army, Pentagon and White House agreed to the upgrade, and lawmakers passed legislation waiving the long-expired time limit for the award to be changed.

McCloughan vowed Tuesday that he would be “the caretaker” of the Medal of Honor for the 89 other men of Charlie Company who assaulted that hill on May 13, 1969.

The award, he said, belongs to them.

“This medal is about love – a love so deep in the soul of the Charlie Tiger bothers and me that it is beyond measurement,” McCloughan said. “… They looked into the face of danger and death, and with backs to the wall we fought for each other until the enemy was beaten and went away.”