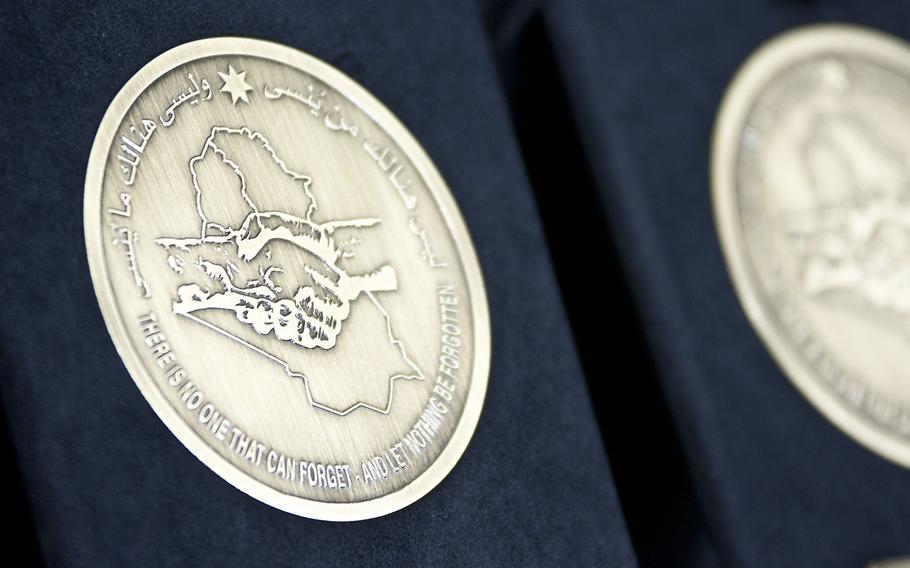 The Iraq Commitment Medal, which was unveiled in December 2011, is supposed to recognize the work of U.S. and coalition troops who served in Iraq following the fall of dictator Saddam Hussein's regime in 2003. (Caleb Barrieau/U.S. Army)

The Iraq Commitment Medal, which was unveiled in December 2011, is supposed to recognize the work of U.S. and coalition troops who served in Iraq following the fall of dictator Saddam Hussein's regime in 2003. (Caleb Barrieau/U.S. Army) 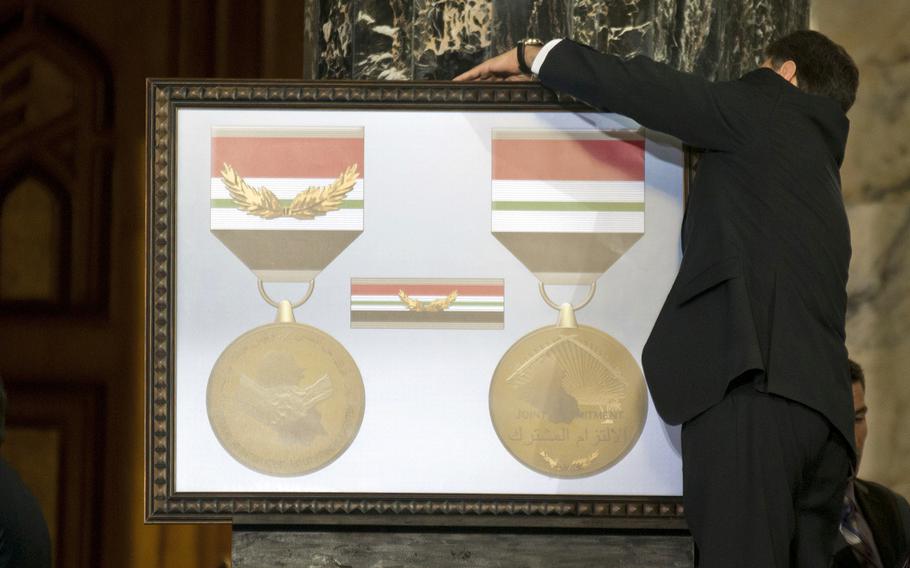 The Iraq Commitment Medal is unveiled during a ceremony in Baghdad on Dec. 1, 2011. (Caleb Barrieau/U.S. Army)

Iraq War veterans tired of waiting for more than a million promised medals are soliciting donations to make 2,500 of their own.

The Iraq Commitment Medal is supposed to recognize the work of U.S. and coalition troops who served in Iraq following the fall of dictator Saddam Hussein’s regime in 2003. One was presented to Vice President Joe Biden by Iraqi Prime Minister Nouri al-Maliki during a ceremony in Baghdad in 2011.

Iraqi Defense Minister Saadoun al-Dulaimi wrote to then-Defense Secretary Leon Panetta in 2011 telling him that the medal should go to anyone who served in Iraq, its territorial waters or its airspace for 30 consecutive days or 60 nonconsecutive days.

“We expect that more than 1 million current or former service members may be eligible to receive the Commitment Medal,” al-Dulaimi wrote in his letter.

Al-Dulaimi said Iraq authorized the United States and its coalition partners to arrange for production so it might “be readily available to the recipients.”

“May the commitment to the bright future of Iraq, which we have shared through many difficult years, never be forgotten,” the minister wrote.

Eight years later, the Department of Defense has yet to authorize servicemembers to wear the medals or taken steps to award them.

The Pentagon said in a statement Tuesday that it greatly appreciates the desire of the government of Iraq to recognize an estimated 1.2 million servicemembers who qualify for the medal.

The service of American military personnel in Iraq is recognized through the Defense Department’s Iraq Campaign Medal. Plans and procedures for approving and distributing the Iraq Commitment Medal will be established once Iraq provides the medals, the Pentagon said.

Iraq’s embassy in Washington, D.C., did not respond to telephone and email messages this week.

However, some veterans are moving ahead with their own plans to produce and award the medals.

The campaign is the brainchild of Edward Mahoney, 35, of Springfield, Va., who said he served as a Marine Corps communications officer in Fallujah and Al Asad from 2008 to 2009.

The award may not be authorized for active-duty troops, but veterans can wear it, Mahoney said.

“Most of the people who went to Iraq are out. They can wear whatever they want, and this isn’t some commemorative medal. They have earned this,” he said.

If the campaign reaches its goal, all the people who have contributed will get a medal. They will be minted by Kennedy Insignia. The firm is certified by the Institute of Heraldry, which furnishes insignia to the U.S. government, Mahoney added.

The gold-colored medal features an outline of Iraq and two lines symbolizing the Tigris and Euphrates rivers. Clasped hands signify friendship between Iraq and the coalition nations while a star represents unity for the Iraqi people. There is an English and Arabic inscription that reads: “There is no one that can forget, and let nothing be forgotten.”

On its reverse side the medal includes an image of the sun symbolizing Iraq’s future of reconstruction and democracy while crossed scimitars represent partnership between coalition and Iraqi forces with another inscription reading: “Joint Commitment” in Arabic and English.

Leonard Le Blanc, an Air Force veteran who worked in Iraq as a security contractor from 2003 to 2006 and contacted Stars and Stripes about the medals, said he’d like to see them authorized for civilians who served in Iraq.

“My interest is in making medals for people who will not get a medal,” he said.

Eric Geressy, a retired Army sergeant major with multiple Iraq tours, said in a text message the medal is a nice gesture by the Iraqi people and government even if it’s never produced.

“I remember during the invasion as we pushed into Baghdad the streets were literally lined up with people cheering us on and clapping,” he said. “They were initially very thankful we were there, but this all was forgot as things spiraled out of control and the war dragged on.”

Soldiers fought over there for each other but also for the Iraqis who couldn’t fight for themselves, Geressy said.

“Even though they could not produce the medal it is a good reminder that some of the Iraqi people appreciated our service and sacrifice made on their behalf,” he said.