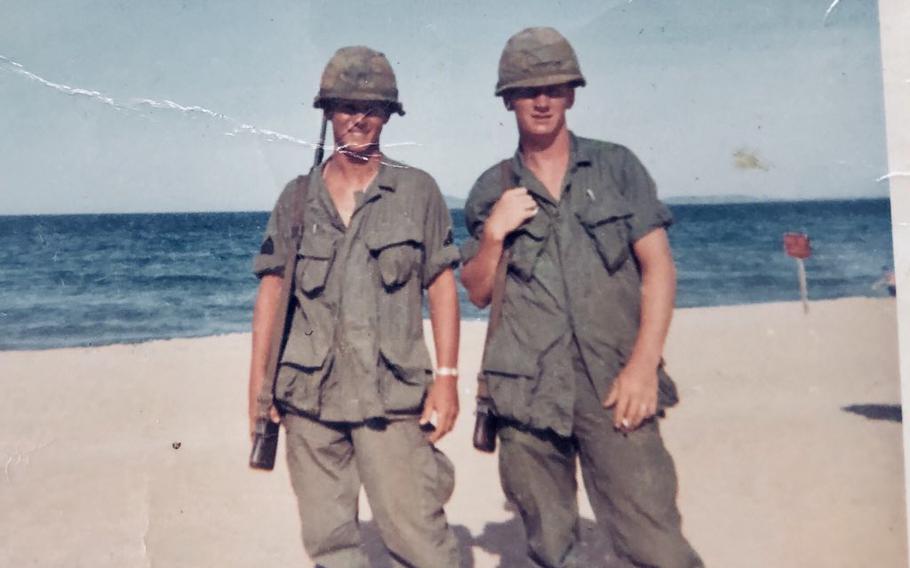 Soldiers Bob Hart, left, and Ron Ridgen, right, stand for a photo at the South China Sea. Hart, drafted at age 19, was a radio operator in 1966 and 1967 during the Vietnam War, where he was exposed to the chemical herbicide Agent Orange. (Photo courtesy of Bob Hart)

Soldiers Bob Hart, left, and Ron Ridgen, right, stand for a photo at the South China Sea. Hart, drafted at age 19, was a radio operator in 1966 and 1967 during the Vietnam War, where he was exposed to the chemical herbicide Agent Orange. (Photo courtesy of Bob Hart) 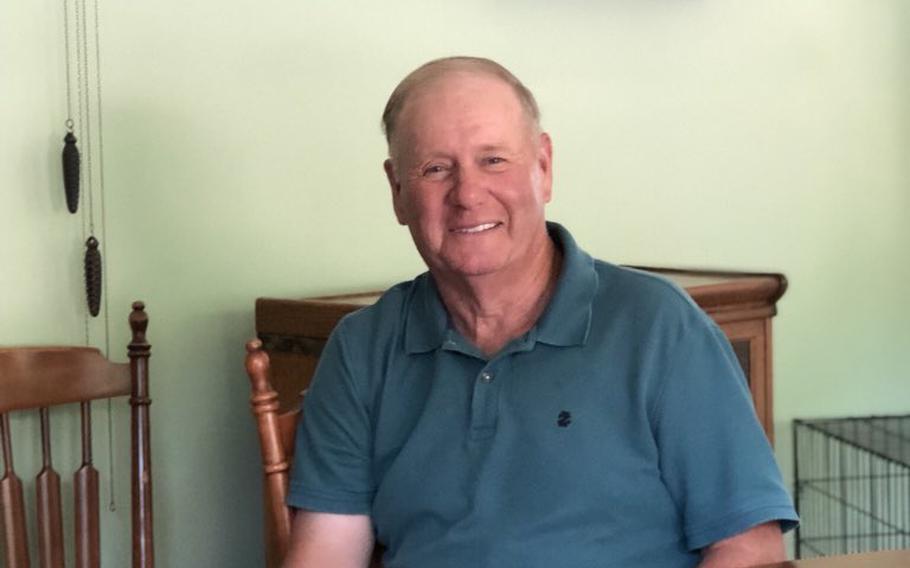 Bob Hart, 73, at a friend’s house in South Jacksonville, Ill., on July 1. Hart, a Vietnam War veteran, uses the Choice program through the Department of Veterans Affairs to get treatment at his local hospital. He was stuck with a $30,000 medical bill because of delayed payments by the VA. (Photo courtesy of Tyson Manker)

WASHINGTON — Bob Hart, a 73-year-old farmer in central Illinois, always pays his bills. But that changed when the Vietnam War veteran was informed he owed $30,000 for medical treatment he thought the Department of Veterans Affairs covered.

“I got a call from my hospital saying I owed them, or they’d take the money out of my bank account,” Hart said. “I just thought, ‘You’ve got to be kidding me.’”

Hart uses the VA Choice program to get treatment at his local hospital in Jacksonville, Ill., where he receives biweekly injections of anti-inflammatory medication for a condition linked to exposure to the chemical herbicide Agent Orange.

The Choice program allows veterans who can’t get a VA appointment or who live in rural areas – such as Hart – to get treatment at private medical providers paid for by the VA. Hart has used the program to go to Passavant Area Hospital for nearly two years – but administrators there told him the VA hasn’t paid them for his treatment since December.

Since he was informed of the bill several weeks ago, Hart has continued to go to the hospital for his injections feeling concerned about whether he will receive treatment.

Hart got his injection July 3 with no troubles. His next is scheduled for July 17.

Passavant is part of the Memorial Health System. A communications official there was reached by phone last week but did not respond to questions about Hart’s bill or about troubles with the hospital getting paid by the VA.

VA Press Secretary Curt Cashour said Tuesday the agency was looking into Hart’s situation. He also said Hart would encounter no interruptions in treatment and his credit wouldn’t be affected. Cashour said the VA contacted TriWest, the third-party administrator that the government uses to pay private providers through the Choice program, to inquire about payments for Hart's care.

“We have contacted TriWest in order to resolve this as soon as possible,” Cashour said. “In the meantime, VA will be reaching out to the veteran directly to ensure he is getting the care he needs.”

Years of problemsHart’s situation isn’t unique. The slow reimbursement of private-sector hospitals has been a chief complaint about the Choice program, which is often criticized as complex and bureaucratic.

“We’re very aware that this is a problem for some veterans who’ve used the Choice program and community care,” said Kayda Keleher, an associate director at the Veterans of Foreign Wars. “It’s something we’ve worked hard with the House and Senate on. The VA should be paying the bill.”

Since the Choice program was created in 2014, some private medical facilities have experienced delays getting paid by the VA. When payments are stalled, veterans’ medical bills can be sent to debt collectors and their credit reports damaged.

The VA established a toll-free number, 877-881-7618, for veterans to call when facing billing issues through the Choice program. According to a letter sent last year by 40 lawmakers to the VA about the issue, the agency received more than 57,000 calls between the program's launch in late 2014 and May 2017 from veterans facing adverse credit reports.

Elected officials have previously tried to step in. The House Financial Services Committee advanced a bill three months ago that would protect veterans’ credit scores when the VA is slow to reimburse private-sector doctors for their medical care. The bill has not yet been scheduled for a vote on the House floor.

In 2015, Sen. John Boozman, R-Ark., arranged meetings between VA officials and hospital administrators who said they were collectively owed millions of dollars for treating veterans.

The VA Mission Act overhauls Choice and instructs the VA to implement a new program for private-sector care by next summer.

The new law will require the VA to pay private-sector medical providers within a certain time, or possibly incur interest. The time is 30 days for electronic claims and 45 for paper ones.

The law also requires the VA to submit an annual report to Congress that lists the number of late claims, how many days that they were overdue and how much interest the agency had to pay out.

Rep. Bruce Poliquin, R-Maine, said the VA is behind on paying some hospitals in his state that can’t afford to wait for reimbursement. In March, Poliquin and Rep. Collin Peterson, D-Minn., founded the Congressional Rural Hospitals Caucus, which promises to ensure private hospitals receive timely and accurate payment from the VA.

“This is a problem when you’ve got a small hospital that might not have bills paid for one to two years,” Poliquin said when speaking in May on behalf of the Mission Act. “We need to make sure all of our rural hospitals get paid, and this bill says if they are not paid within 30 days, then interest starts accruing on that.”

The new law also permits the VA to contract with an outside company that could take on the duties of paying private-sector providers. That decision will likely be made in the next year as the VA goes through the rulemaking process to implement the Mission Act.

“This tells the VA they need to figure out how to handle this internally and do this efficiently, or allow them to contract out to a non-government entity,” Keleher said.

It’s unclear what happened in Hart’s situation. The VA confirmed Hart has approval from them to receive treatment at his local hospital through June 2019.

On Tuesday, Hart visited the billing department at Passavant hospital, attempting to understand the mix-up. He said it appeared there was a communication breakdown between the hospital, the VA and TriWest about whether his doctor was an authorized provider through the Choice program.