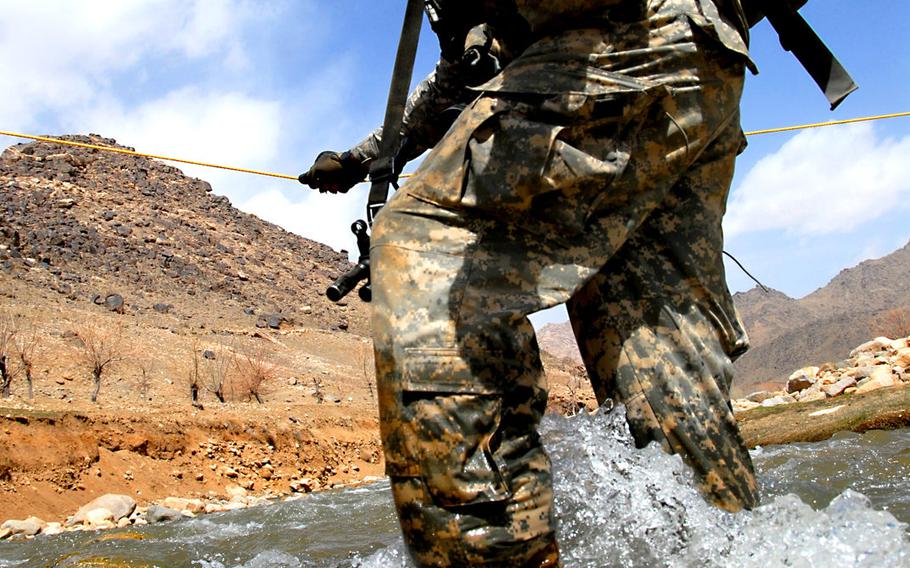 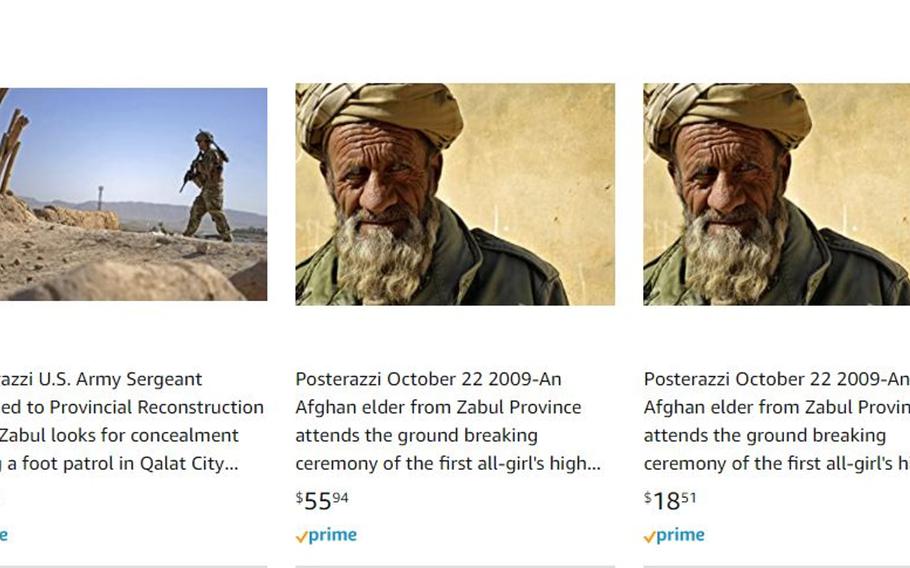 A screenshot from Amazon.com shows several posters for sale on Tuesday, Jan. 19, 2021, including one of an Afghan elder that can be found as a free download from the official U.S. military photo website DVIDShub.net. (Chad Garland/Stars and Stripes) A screenshot from DVIDShub.net, the U.S. military's photo website, taken on Tuesday, Jan. 19, 2021, showing a photo of an Afghan elder that has been made available for sale on Amazon.com, and other sites that market military photos for sale as posters and prints. (Chad Garland/Stars and Stripes) A screenshot of Walmart.com showing various military photos for sale as posters on Tuesday, Jan. 19, 2021. (Chad Garland/Stars and Stripes) 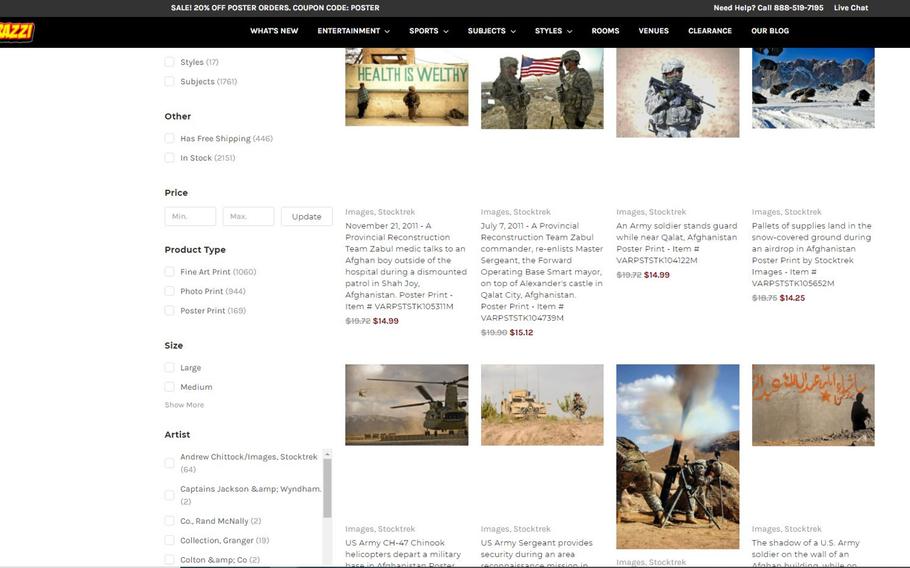 A screenshot of Posterazzi.com showing several military images for sale as poster prints on Tuesday, Jan. 19, 2021, including an image from a hospital in Shah Joy, Afghanistan, with the words ''Health is Welthy'' painted on a wall. That image is available as a free download on the U.S. military's official photo website DVIDShub.net. (Chad Garland/Stars and Stripes) A screenshot of the U.S. military's official photo website, DVIDShub.net, showing a hospital in Shah Joy, Afghanistan. The photo is one of many free military photos being sold as posters or prints at various online sites. (Chad Garland/Stars and Stripes)

Army veteran Nicholas Giovannelli is suing to stop several companies from “exploiting his image for profit” after he found them selling posters featuring photos of him taken in Afghanistan many years ago.

Giovannelli deployed twice and was medically discharged five years ago after suffering a traumatic brain injury and other wounds, his lawyer Craig D. Tobin said during a video press conference last week to announce the Chicago district court lawsuit.

“Nick was very proud and is very proud of his military service,” Tobin said. “He has no problem with the fact that the United States military took photographs of him while he was on combat tours.”

But Giovannelli never consented to letting companies use those images for their own benefit, Tobin said. He was shocked to learn of the poster a few months ago, after someone he had served with brought it to his attention, he said.

“It doesn’t take a great amount of imagination to understand that someone who has sustained pretty substantial injuries on behalf of his country can be seriously harmed — both actually and mentally — by having to see images he never consented to to be sold publicly online,” Tobin said.

The list of defendants include Walmart and Amazon, along with several websites that sell stock photographs or other art prints. Amazon declined to comment and several of the other sites did not immediately respond to inquiries.

“We take this seriously and once we are served with the complaint, we will respond as appropriate with the Court,” said Randy Hargrove, a Walmart spokesman.

Tobin declined to provide the photos, but described some of them. At least one, taken as Giovannelli crossed a river in Zabul province in March 2009, still appears on a Defense Department website.

Adam Mancini, who was an Army staff sergeant when he took the picture, had no idea the photo was available for sale, or that it had become the subject of a lawsuit. “I remember that day ... great group of guys,” Mancini said via Facebook Messenger.

At the time, Giovannelli was with Bravo Company, 1st Battalion, 4th Infantry Regiment, at Forward Operating Base Baylough.

A native of the Chicago suburb of Niles, he deployed later to Logar province with the 173rd Airborne Brigade, the Chicago Tribune reported after his hometown presented him the keys to the city in 2015 for his service.

He took part in some 100 combat patrols, earning unspecified valor awards, Tobin said, and suffered TBI in an incident where he held down a guard post in the midst of “relentless mortar fire.” He also earned the Purple Heart.

The photo of the river crossing doesn’t appear to still be for sale on Amazon or Walmart, though many other photos that the military provides for free still are. The images are in the public domain and may be used for both noncommercial uses, such as in newspapers, and for commercial purposes such as advertising and fundraising.

Military release rules state that those pictured do not waive their personal privacy or publicity rights to the use of their likenesses for commercial purposes.

That’s the issue in the Giovannelli case.

The companies selling the posters “owed a duty to Giovannelli under Illinois law not to publicize and/or sell his image for profit without first procuring his written consent,” the lawsuit alleges, the Sun-Times reported.

Their failure to do so caused him “extreme emotional distress,” said the suit, which seeks damages of over $1 million.

Tobin claimed the military never intended the photos to be used in such a way. An Army spokesman did not have an immediate response but was looking into the matter.

If the lawsuit succeeds, it could have wide-ranging implications, as a review of the defendant’s websites, including Stocktrekimages.com, Pixels.com and Posterazzi.com, show that many photos feature recognizable U.S. service members who may have similar rights claims.

“We want to make sure that the exploitation of these soldiers stops,” Tobin said, adding that any profits be given to the rightful owners of those benefits.

However, the plaintiff’s case isn’t clear-cut. A California court in 2001 found that an artist could not sell images of The Three Stooges without permission.

But in 2013, a federal district court in Illinois found that Getty Images did not violate that state’s publicity rights act when it offered to sell photos of singer Marshall Thompson, a member of the Chi-Lites, a group that made several 1970s hits.