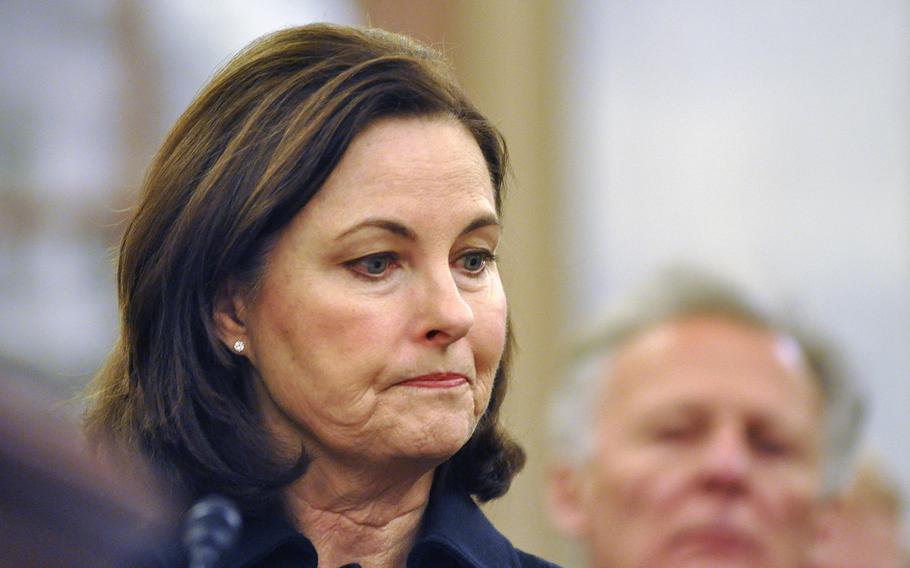 Susan Selke, mother of Marine veteran Clay Hunt, who killed himself March 31, 2011, attends a Senate Veterans Affairs Committee hearing on Capitol Hill on Nov. 19, 2014. Selke and her husband, Richard, looking on from behind, listen to testimony in support of the Clay Hunt Suicide Prevention Act, which the committee passed on Wednesday, Jan. 21, 2015. (Carlos Bongioanni/Stars and Stripes)

The Clay Hunt SAV Act, named after a Marine vet who committed suicide in 2011, was passed by the Senate Veterans Affairs Committee and now must pass a vote in the full Senate to become law. The House overwhelmingly passed the bill with 403 votes earlier this month.

The bill calls for a one-stop Department of Veterans Affairs website with suicide prevention resources for veterans, incentives for more psychiatrists, and a review of current programs.

“When you have 8,000 veterans a year committing suicide – which is more veterans than have died in all of Iraq and all of Afghanistan since we’ve been fighting – then you have a serious problem and this is emergency legislation that we need to pass to help our veterans,” Sen. Johnny Isakson, R-Ga., who became the new committee chairman this month, said in a release.

Veteran groups and Clay Hunt’s parents have backed the measure since it was first introduced last year. Hunt served in Iraq and Afghanistan and struggled with post-traumatic stress disorder, becoming one of the 22 veterans who commit suicide each day.

Despite widespread support among lawmakers, the bill failed in the last congressional session because retiring budget hawk Tom Coburn blocked a final vote in the Senate. The Oklahoma Republican had objected to the $22 million price tag, which supporters say is small in terms of the federal budget.

Members of each chamber quickly revived the bill and scheduled key votes this month as Congress began its new session. Isakson said he hopes Senate leadership will take up the bill quickly for a final floor vote and send it to the White House for signature.

Here is what the legislation would do: