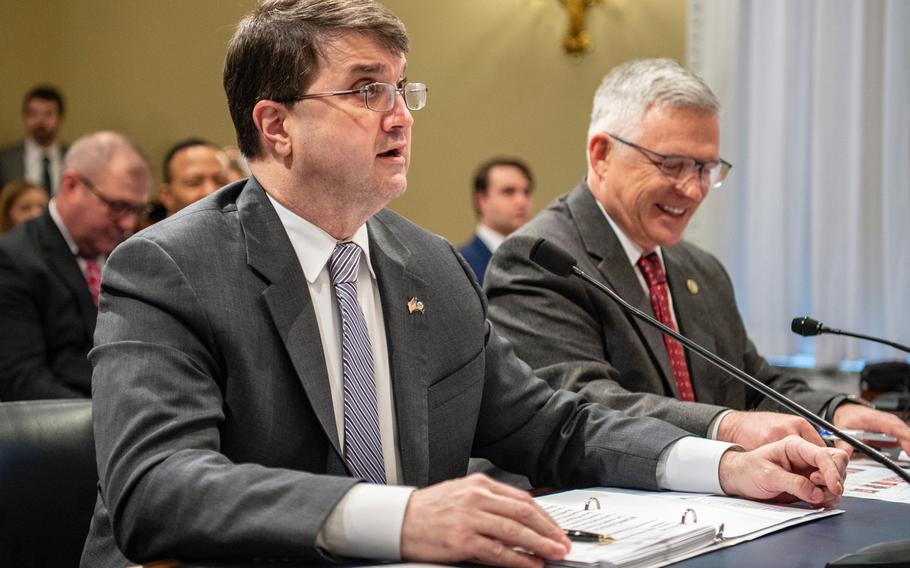 Veterans Affairs Secretary Robert Wilkie prepares to testify during a hearing on Capitol Hill in Washington on Wednesday, Feb. 27, 2019. (Carlos Bongioanni/Stars and Stripes)

Speaking to the House Committee on Veterans’ Affairs for the first time in 2019, Wilkie said he had to get the VA’s human resources department in order before he could address hiring needs.

“I have to prioritize our efforts as to where we have the most need,” he said, answering a question about the vacancies from Rep. Conor Lamb, D-Pa. “My first week as secretary, I had two senior officials come to me with two different numbers as to the number of employees we had.”

Wilkie said he chose to focus the agency’s hiring efforts on mental health, women’s health and primary care because they are of greatest demand on VA facilities. Each health care facility touts access to same-day mental health appointments and the population of women veterans is continuing to grow. The increased need for primary care professionals is driven by newer veterans being used to urgent care, he said.

To entice job candidates in a tough labor market, Wilkie said the VA is using the financial incentives of relocation, bonus pay and increased salaries.

“I’m going to probably come back to you and ask to expand those so we can reach deeper into those populations,” he said.

About 43,000 of the VA vacancies are within the Veterans Health Administration, Dr. Richard Stone, the administration’s executive in charge, told committee members. He said the VA has purchased commercial human resource management software and the agency is now better able to monitor openings within their workforce.

Stone described the labor market for health care in America as “tremendously turbulent,” with an annual growth rate of 2 to 3 percent.

“But [the vacancies do not] reflect how we are meeting the needs of veterans. The best way to look at this is not against the 49,000, but against wait times. Our wait times continue to be reduced across the delivery system,” he said.

Lamb asked Wilkie during the hearing whether the White House had asked him not to fill any of the 49,000 vacancies. Wilkie responded no.

“I also know that we’re being told by the workforce, the boots on ground, the nurses, the staff members, that they are shorthanded and it’s affecting their quality of work and their health and physical condition at the end of the work day. The shortages are being felt by the people who are there,” Lamb said.

With a growing female veteran population, Rep. Kathleen Rice, D-NY, asked Wilkie whether he would consider changing the motto of the VA to be gender neutral to better reflect the diversity of veterans. The agency’s official motto is a quote from President Abraham Lincoln’s second inaugural address in 1865: “To care for him who shall have borne the battle and for his widow, and his orphan.”

“I’m happy to say we serve all veterans,” he said. “I will tell you philosophically, I’m not arrogant enough to change Lincoln’s words. … Without him, there is no veteran bureau or department. I am happy being part of his legacy. But I tell you, our philosophy is we serve all veterans. I’m not in favor in changing the motto. I let actions speak louder than words.”

Rice said she intends to refile a bill from the previous Congress to enact that change.

“In keeping with President Lincoln’s focus on equality for all, I’m sure if he were alive today he would say women should be acknowledged as well,” Rice responded.

The Rice-Wilkie exchange tied into the opening remarks made by Rep. Mark Takano, D-Calif., chairman of the committee, in which he outlined his vision of what the VA should aspire to by the year 2030.

“My vision is twofold: VA must be a system that is easy to navigate – easy to enter with logical responses as veterans’ needs change or new needs arise,” he said. “The second part of my vision is that VA catches up to the changing and new demographics of veterans, and be nimble enough to adapt and respond as those demographics change.”