USS Harry S. Truman will remain at sea in bid to keep sailors safe from coronavirus 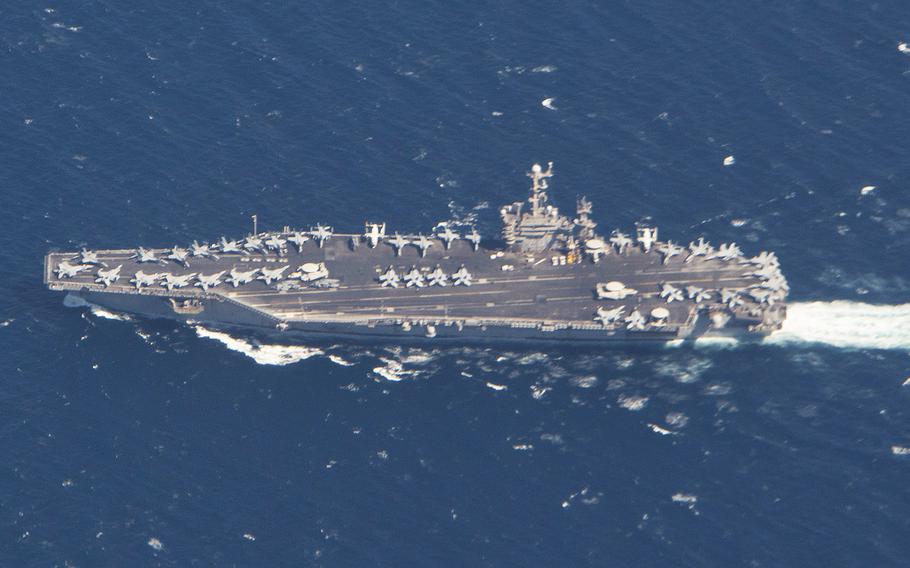 In an April 7, 2020 photo, the aircraft carrier USS Harry S. Truman is seen from a P-8A Poseidon aircraft assigned to Patrol Squadron (VP) 4 during a maritime domain awareness mission over the Strait of Gibraltar. (Juan S. Sua/U.S. Navy)

WASHINGTON— The USS Harry S. Truman will remain at sea in the Atlantic Ocean in an attempt to protect its sailors from the coronavirus, the Navy announced Monday.

The aircraft carrier, and the ships accompanying it as part of its carrier strike group, will remain at sea to be ready to deploy if called upon, according to the 2nd Fleet in Norfolk, Va.

“The ship is entering a period in which it needs to be ready to respond and deploy at any time,” Vice Adm. Andrew Lewis, commander of the 2nd Fleet, said in a prepared statement. “Normally we can do that pierside, but in the face of [the coronavirus pandemic], we need to protect our most valuable asset, our people, by keeping the ship out to sea.”

The Navy said it will continue to evaluate the carrier strike group’s situation and will update the group’s sailors and their families in about three weeks.

The Navy has the highest number of coronavirus cases of the military services at 1,056. The USS Theodore Roosevelt was diverted to Guam in late March due to an outbreak of the virus aboard the aircraft carrier, which has since infected 585 sailors. The death of one Roosevelt sailor from the virus was announced Monday.

The former commander of the Roosevelt, Capt. Brett Crozier, wrote a letter asking naval officers for help with the outbreak aboard the ship. The ship’s environment with its narrow corridors and shared bedrooms makes it easy for the virus to spread and impossible for the crew to follow Centers for Disease Control and Prevention health guidance, he wrote.

The Roosevelt remains docked on Guam as the Navy attempts to control the outbreak. About 4,021 sailors have been transferred from the ship to the island.

The Navy also has two other aircraft carriers dealing with the coronavirus.

The USS Nimitz, now in port in Bremerton, Wash., has had one sailor placed in isolation off the ship after showing symptoms but having an “inconclusive” test for the virus. Another sailor was on leave in early March when that person tested positive and has not returned to the Nimitz.

The USS Ronald Reagan is preparing for deployment from Yokosuka Naval Base in Japan, where it has been undergoing maintenance. More than 1,000 sailors from the Reagan and its strike group were bused to Yokota Air Base and Naval Air Facility Atsugi last week to complete a 14-day isolation before they deploy.

The Truman is heading back to the United States after a deployment to the 5th Fleet in the Middle East and the 6th Fleet in the Mediterranean Sea, according to the Navy. The ship left Norfolk in November after the rest of the strike group had already deployed in September due to repairs for an electrical malfunction.

“After completing a successful deployment we would love nothing more than to be reunited with our friends and families,” Rear Adm. Andrew Loiselle, commander of Carrier Strike Group 8, said in the statement. “We recognize that these are unique circumstances and the responsible thing to do is to ensure we are able to answer our nation’s call while ensuring the health and safety of our sailors.”