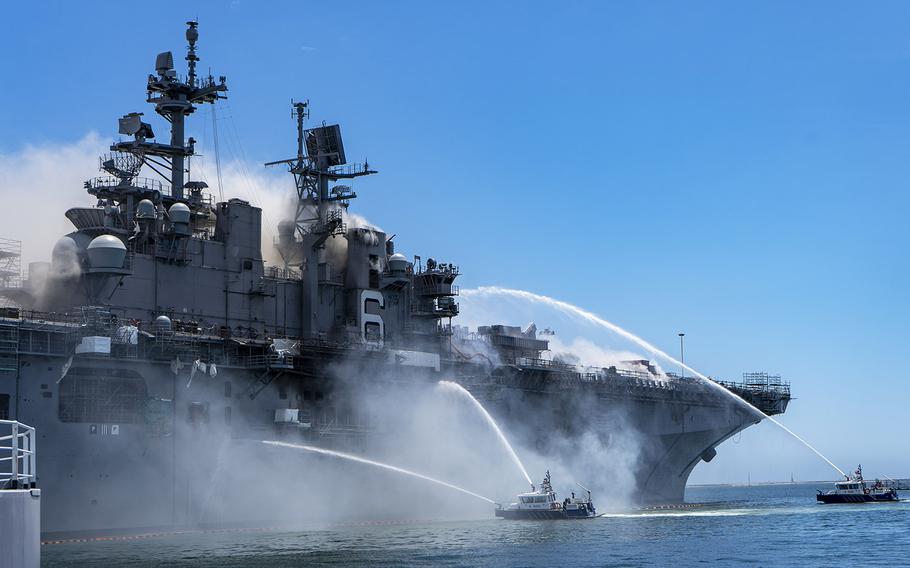 WASHINGTON — A fire suppression system aboard the USS Bonhomme Richard was under maintenance and not operational when the devastating fire, believed to have originated in the cargo hold of the ship, broke out Sunday morning, a senior Navy officer said Monday.

As of Monday, 34 sailors and 23 civilians have been treated for minor injuries while firefighters battle the fire aboard the ship for a second day, said Lt. Cmdr. Nicole Schwegman, a spokeswoman with Naval Surface Force, U.S. Pacific Fleet. Of the 17 sailors who were hospitalized Sunday, five sailors have remained in the medical facility for observation and are in stable condition.

So far, minor injuries include heat exhaustion and smoke inhalation, according to Schwegman.

The cause of the fire is still under investigation and the origin of an explosion that also occurred on the ship Sunday is still unknown, The Associated Press reported.

A fire was reported aboard the amphibious assault ship at about 8:30 a.m. Sunday while it was moored at the pier, said Mike Raney, a spokesman for Naval Surface Force, U.S. Pacific Fleet. At the time of the fire about 160 sailors were on the ship, which was undergoing maintenance, according to Raney. The ship typically has a crew of about 1,000.

Navy officials believe the fire started in the cargo hold of the ship where supplies were being stored for the ship’s maintenance, Rear Adm. Philip Sobeck, the commander of Expeditionary Strike Group 3, told reporters Monday.

One of the ship’s fire suppression systems was not operational at the time of the fire because it was being worked on in the shipyard, forcing them to fight the fire with people and supplies from the pier and the shipyard, Sobeck said.

“For the last 24 hours, 400 sailors have been on board that ship to make sure that we make every effort to save that ship,” he said.

Firefighting operations continued aboard the ship through the night and three helicopters with water buckets were brought in to help. So far, more than 415 buckets of water have been dumped over the ship, Capt. Will Eastham, the commanding officer of Helicopter Sea Combat Squadron 3, said Monday during a news conference. The helicopters are expected to work throughout Monday and into the evening.

“The fire has spread throughout the ship in varying stages,” Sobeck said, and Navy officials believe the roughly 1 million gallons of fuel aboard the ship is separated from the fire by two decks. The heat reaching the fuel remains a concern, but crews are working to keep the risk low, he said.

The ship is also listing due to the amount of water being used in the ship to put out the fire. Sobeck said personnel are working constantly to keep a balance.

Firefighters are encountering a lot of debris that has fallen as they combat the fire, such as scaffolding from the maintenance work, according to Sobeck. They must move compartment to compartment, assessing each one’s stability and temperatures are ranging as high as 1,000 degrees, he said.

“I feel absolutely hopeful because we got sailors doing the business of what they're trained, and they're professionals beyond belief,” Sobeck said.

"We are grateful for the quick and immediate response of local, base, and shipboard firefighters aboard USS Bonhomme Richard. Our thoughts and prayers are with our [Bonhomme Richard] sailors, their families, and our emergency responders who continue to fight the fire. Godspeed," he said in a statement.

Two nearby ships, the USS Fitzgerald and the USS Russell, had to move away from the pier Sunday afternoon because of the fire. The USS Fitzgerald had just arrived in San Diego July 2, according to U.S. Naval Institute News, after undergoing more than two years of restoration and modernization following the deadly 2017 collision that killed seven sailors.