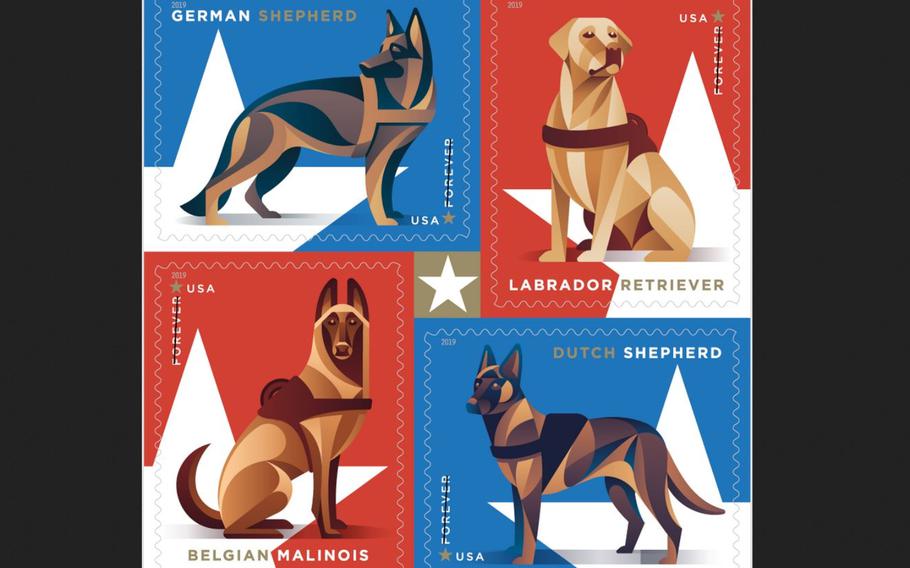 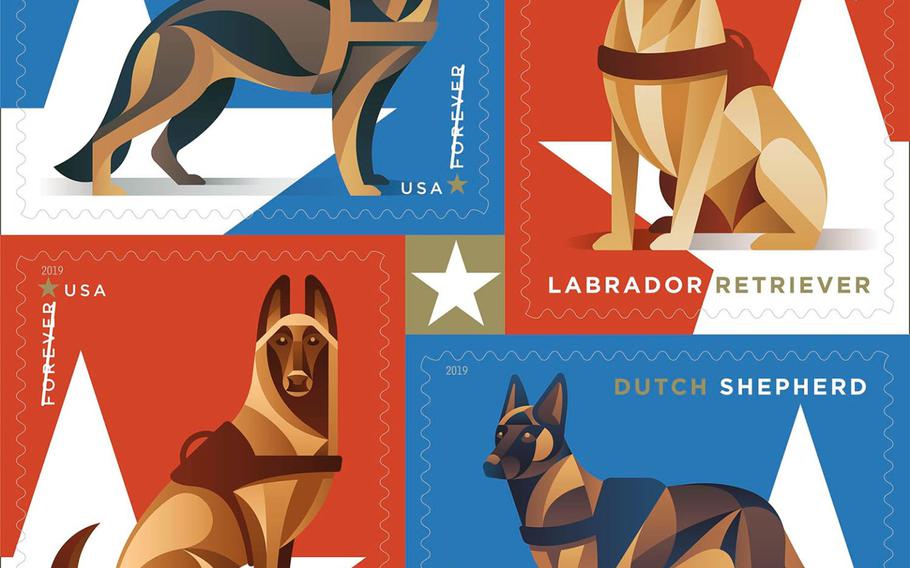 The furriest members of the armed forces will grace the U.S. Postal Service’s newest stamps to be released Thursday.

The new red, white and blue stamps featuring military working dogs were designed to “honor the nation’s brave and loyal canines,” according to a Postal Service statement released last week.

The stamps will feature artist renderings of four breeds commonly used as military working dogs: German shepherd, Dutch shepherd, Labrador retriever and Belgian Malinois, according to an image of the stamps.

In four different stamps, each breed is pictured wearing a working harness, posing against a backdrop of a white star against a red or blue background, according to the image.

Petty Officer 2nd Class Michael DeCarli, a master-at-arms at Yokosuka Naval Base, Japan, said he plans to purchase a stamp and feels honored to have his profession featured on the classic icon.

DeCarli, of Evansville, Ind., deployed last year to Qatar and Syria with his military working dog, Adam. DeCarli and the 6-year-old German shepherd worked to detect explosives and went on patrols in the two countries from April to December 2018.

“Postage stamps for a long time have been a collector’s item featuring important people and events,” Decarli said. “To be considered in that, I feel very honored as part of the [dog-handler] community.”

The U.S. has used military working dogs alongside servicemembers since World War I for multiple purposes, including explosives and narcotics detection, search and rescue and security, according to the U.S. War Dogs Association.

Their senses of smell and sight “are literally superhuman,” allowing dogs to do what servicemembers alone could not, according to the War Dogs Association.

Chief Petty Officer Autumn NoRunnerHerron, a master-at-arms and regional kennel master for Navy Region Japan, said in an email to Stars and Stripes that the stamps will build awareness among civilians, “helping them understand the contribution of the 1 percent that serve and the smaller percentage of those who earn the title of K9.

The military working dog stamps will be issued as “forever” stamps, meaning they “will always be equal in value to the current First-Class Mail 1-ounce price,” according to the Post Office statement.

Postage rates are 55 cents per stamp.