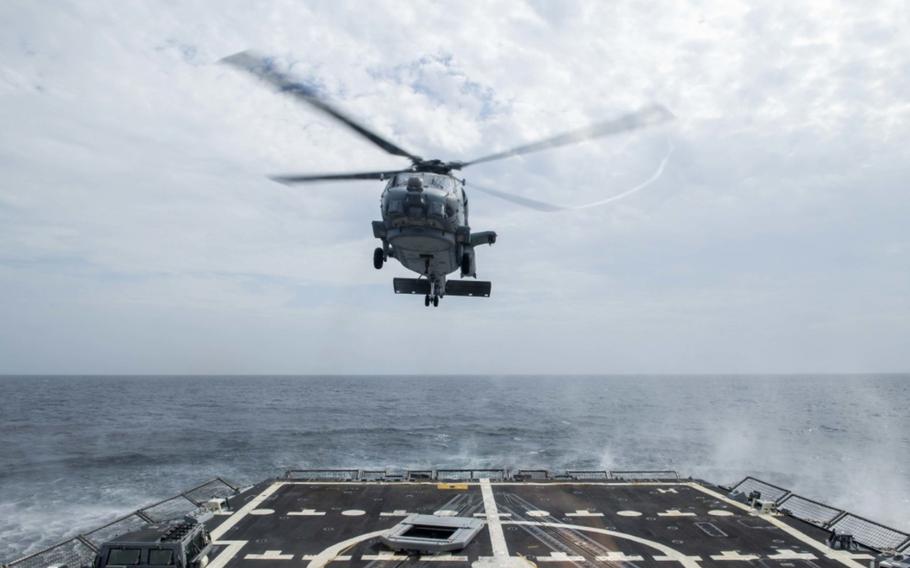 WASHINGTON — Hundreds of American sailors and Coast Guard members will learn to maneuver and operate in the Arctic as part of an annual Canadian maritime exercise as Russia and China continue to increase their activity in the region, according to military officials.

“The Arctic is the new frontier of our homeland defense. Our competitors are steadily expanding military presence in the region and left us with no choice, no option but to improve our homeland defense capability and capacity,” Vice Adm. Andrew Lewis, the commander of 2nd Fleet, said Tuesday during a news briefing about Operation Nanook 2020.

The annual Canadian exercise started in 2007, though this year it will be shortened due to the coronavirus pandemic. The maritime component of the exercise, Tuugaalik, started Tuesday and ends Aug. 24. Ships participating are from the United States, Canada, France and Denmark. The USS Thomas Hudner, a guided missile destroyer, will participate as well as a detachment from Helicopter Maritime Strike Squadron 46 and the Coast Guard cutter Tahoma, according to a 2nd Fleet statement.

This is the fourth time that the 2nd Fleet has operated in the Arctic and the first time they have sent rigid inflatable boats from the Hudner to work in those temperatures, according to Lewis.

The Pentagon’s 2018 National Defense Strategy puts Russia and China at the center of the military’s renewed focus on great-power competition. Based at Naval Station Norfolk, Va., 2nd Fleet focuses on the Atlantic Ocean including up to the Arctic, which is becoming a greater strategic concern as more ice is melting, opening more routes to travel through the region. Russia has increased its presence in the region by establishing more military bases and operating a large icebreaker fleet.

There is growing international interest in the region’s resources, fishing, and global strategic positioning, according to Vice Adm. Steven Poulin, the commander of Coast Guard Atlantic Area.

The Arctic’s warm season is lasting longer each year, which is causing more traffic, according to Rear Adm. Brian Santarpia, the Canadian commander of Maritime Forces Atlantic and Joint Task Force Atlantic.

“As we see traffic increase, we know that we need to be ready to operate in the north ourselves to a much greater degree,” he said.

The ships will work together on tactical scenarios, according to Santarpia, including gunnery, locating and tracking ships and basic security tasks.

Experiencing how to operate in the Arctic through training allows sailors to understand how different it is from other parts of the world, according to Lewis. That includes special clothing in case they fall into frigid waters or just the longer time it takes to navigate the waterways.

“The Arctic Region requires specialized training, gear, and a unique skill set that can only be honed and developed over time and repetition,” he said.

Having the navies and coast guards of several nations working together in this operation sends a message that their alliance and presence in the region is strong, according to the naval officers.

“The strength of that partnership and the ability to operate safely and in accordance with international norms is what we are intending to do. And that's what the expectation is of all the parties that are [participating],” Lewis said.