US-N. Korean summit back on; Trump calls it start of a 'process' 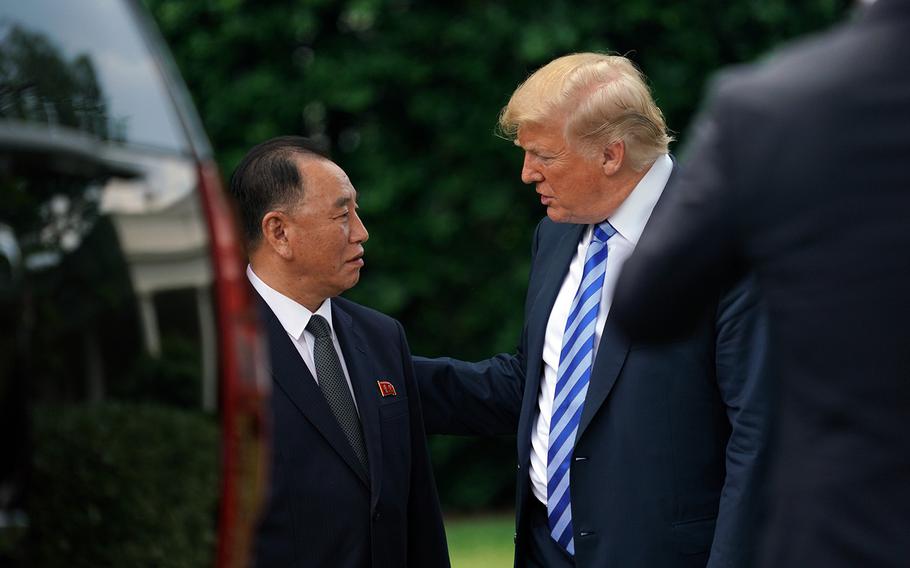 SEOUL, South Korea — President Donald Trump announced Friday that his historic summit with North Korean leader Kim Jong Un is back on but lowered expectations for an immediate breakthrough, calling it the start of a “process.”

The June 12 summit in Singapore, which will be the first of its kind, will focus on persuading the North to abandon its nuclear weapons program.

Trump said he believes Kim is committed to that goal, but the president signaled a shift from his previous all-or-nothing stance.

“It will be a beginning. I don’t say and I’ve never said it happens in one meeting,” he told reporters on the South Lawn of the White House. “But I think you’re going to have a very positive result in the end.”

Trump spoke after meeting with a senior North Korean official who delivered a letter from Kim.

The president gave mixed signals about whether he had read the letter but was clearly pleased with what he heard from Kim Yong Chol, who traveled to Washington after two days of meetings with Secretary of State Mike Pompeo in New York.

The announcement came a week after Trump abruptly canceled the summit, citing “tremendous anger and open hostility” from the North.

Trump quickly welcomed a conciliatory response from the North, and a series of negotiations on several fronts yielded results.

The stakes are high as all sides seek to maintain the momentum for peace after months of saber-rattling and missile tests that raised fears of a nuclear war.

South Korea’s presidential office welcomed the news, saying it "will excited but calmly look forward to the historic meeting.”

Trump’s administration has claimed its policy known as “maximum pressure” was responsible for bringing the North Koreans to the table by imposing tough economic sanctions and diplomatic isolation.

START OF A PROCESSThe president said Friday that he wasn’t lifting any punitive measures, but he adopted a warmer tone.

“I don’t even want to use the term ‘maximum pressure’ anymore,” he said.

Trump also said he had unilaterally suspended plans to slap the North with hundreds of new sanctions that had been readied. "I'm not going to put them on until such time as the talks break down," he said.

Gone was the tough talk in which Trump mocked Kim Jong Un as “little rocket man” and threatened to “totally destroy” North Korea if necessary as the North demonstrated rapid progress in its weapons development.

Trump acknowledged Friday that it would likely take more than one meeting to achieve his goal of complete, verifiable and irreversible denuclearization.

“We’re not going to go in and sign something on June 12th and we never were. We’re going to start a process,” he said, adding that he had told the North Koreans it could go fast or slow. “But I think they’d like to see something happen. And if we can work that out, that will be good.”

Analysts cautioned that the two sides likely remain far apart in their definitions of denuclearization.

Washington seeks the dismantling of the North’s nuclear weapons apparatus while Pyongyang has included political demands such as suggesting the United States should end its alliance with South Korea.

The North also has a track record of reneging on agreements.

When asked if troop levels were discussed during his meeting with Kim Yong Chol, Trump said only that “we talked about almost everything.”

Defense Secretary Jim Mattis said later that the fate of U.S. troops was not up for negotiation with the North.

“That issue is not on the table here in Singapore on the 12th nor should it be,” he said during remarks at the Shangri-La Dialogue in Sinagpore, an annual international security forum.

The U.S. maintains some 28,500 servicemembers in South Korea.

ENDING THE WAR?The president also raised the possibility that the two sides could agree on a formal end to the 1950-53 Korean War, which was left in a stalemate after the sides signed an armistice instead of a peace treaty.

Logistical planning for the summit has continued in Singapore as the president hinted in recent days that he was prepared to attend.

U.S. and North Korean officials also met in the truce village that sits in the heavily fortified border that divides the peninsula.

But it was Pompeo’s meetings with Kim Yong Chol, the most senior North Korean leader to visit the U.S. in 18 years, that proved a turning point.

The secretary of state said Thursday that Kim Yong Chol would travel to Washington to deliver the letter. But he acknowledged “there remains a great deal of work to do.”

The North Korean envoy then spent nearly two hours talking to Trump, who later walked him to his black SUV.

Kim Yong Chol, who is considered the North Korean leader’s top aide, was granted special permission to travel to the U.S. despite being on a sanctions list.

Trump first said he had received “a very interesting letter” from the envoy and teased reporters about revealing its contents. But then he said he hadn’t read it, adding “I may be in for a big surprise, folks.”

Later Friday, deputy White House press secretary Hogan Gidley confirmed that Trump had read the letter, but he did not reveal its contents, according to The Associated Press.

No details were released about the shape of a possible nuclear deal. The North test-fired dozens of missiles, including three ICBMs, and conducted its sixth and most powerful nuclear test last year.

But skeptics say those gestures were largely symbolic since missile tests could resume at any time and studies have claimed the mountainous testing facility at Punggye-ri was already near collapse.

The Trump administration, meanwhile, has dangled security guarantees for Kim’s regime, which has been accused of human-rights abuses, as well as economic incentives.