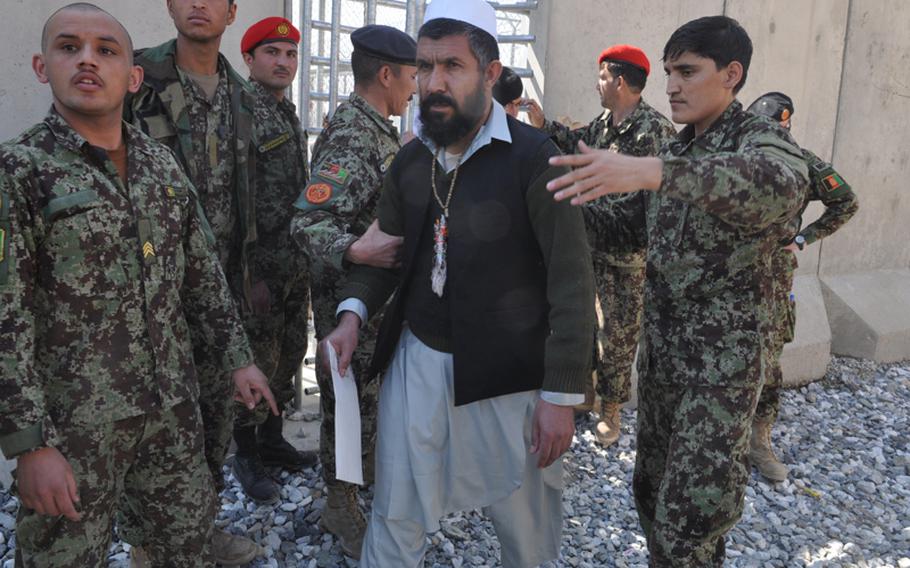 A prisoner is led away after being released as part of a ceremony to mark the handover of Parwan Prison from U.S. to Afghan control in March 2013. American military leaders in Afghanistan have accused the Afghan government of flouting the judicial process to free dozens of prisoners considered by the U.S. to be “legitimate threats to security.” (Heath Druzin/Stars and Stripes)

KABUL — American military leaders in Afghanistan on Monday accused the Afghan government of flouting the judicial process to free dozens of prisoners considered by the U.S. to be “legitimate threats to security.”

In a statement released by U.S. Forces–Afghanistan, officials said they have learned that 37 of 88 disputed detainees being held by the Afghans are scheduled to be released soon.

The last detention facility under U.S. control in Afghanistan, a prison in Parwan province was officially handed over to the Afghans last March, after delays caused by American fears that high-value prisoners could be released, and concerns by human rights organizations that detainees could face abuse at the hands of Afghan guards. The continued U.S. involvement in the detainee system became a source of tension between the U.S. and Afghan President Hamid Karzai.

The fate of the prisoners slated to be released is one of several points of friction as Kabul and Washington negotiate the future of foreign troops in the country.

Karzai has said the detention of prisoners is a matter of national sovereignty, while U.S. and some Afghan military officials fear they could return to the battlefield and that the release of those accused of killing Afghan troops could undermine morale in the nation’s security forces.

Pentagon spokesman Col. Steve Warren would not rule out the possibility that ISAF forces will try to detain or take action against the released prisoners if they are set free.

“That’s a question to be determined, I think,” Warren said. “I won’t talk about our plans for the future, of course, but obviously we take this matter very seriously and we’re very concerned.”

“This extra-judicial release of detainees is a major step backward in further developing the rule of law in Afghanistan,” Monday’s USFOR-A statement read. “The [Afghan Review Board] is releasing these individuals without referral to an investigative body or the Afghan justice system despite the fact that the U.S. has disputed these 88 cases.”

The statement described the 88 as “dangerous individuals ... who are legitimate threats to security and for whom there is strong evidence or investigative leads supporting prosecution or further investigation.”

Afghan officials did not respond to a request for comment. Initially, all 88 prisoners were slated for release, but that number was revised to 72 in early January. It was not immediately clear whether the 37 constitutes another revision, or is merely a first group to be released.Karzai, but the dispute has been ongoing since Karzai ordered the release of all but 16 of the prisoners earlier in January.

The Afghan Review Board, the commission in charge of determining the detainees’ fate, concluded that there is insufficient evidence to hold the men. But U.S. military officials contend that the prisoners have been involved in attacks on coalition and Afghan troops and pose a security threat if freed.