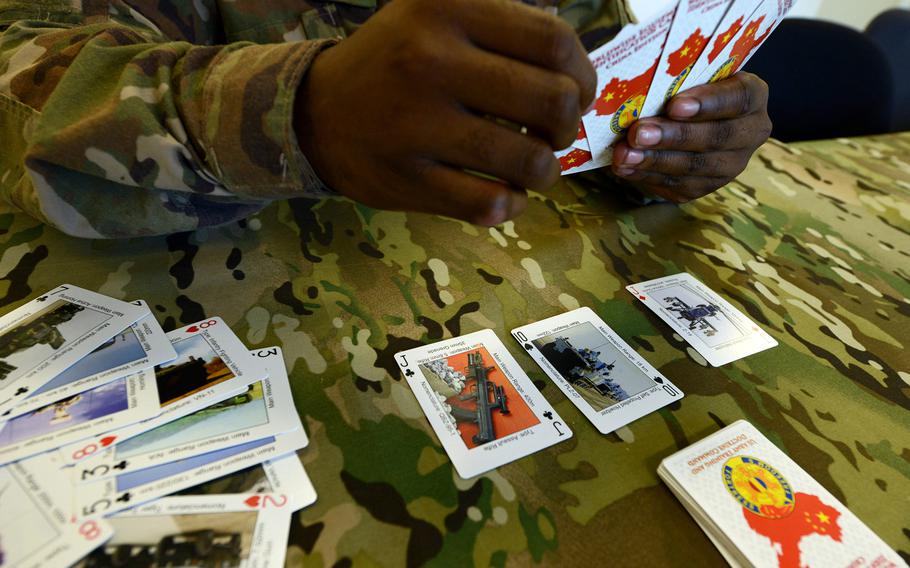 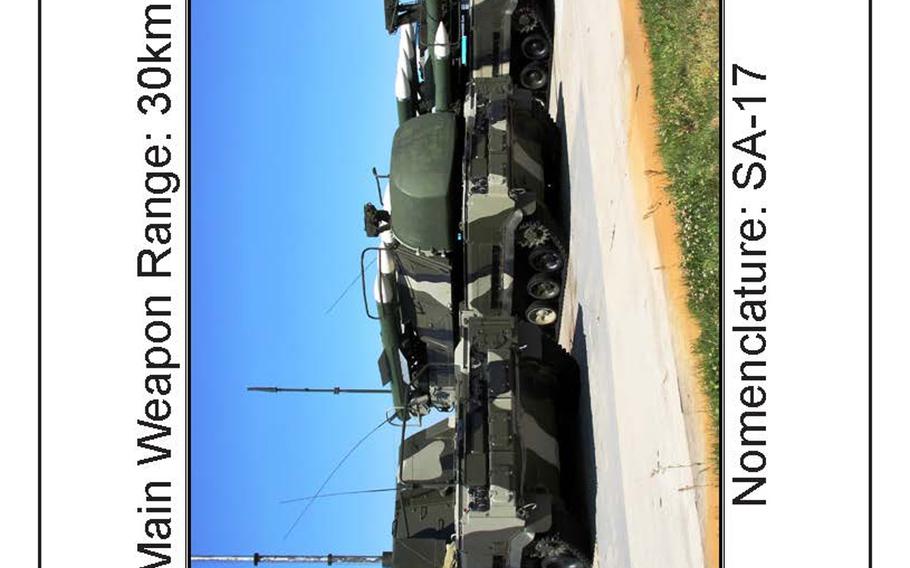 The ace of spades in the Russian deck shows the SA-17, a surface-to-air missile system. (U.S. Army)

KAISERSLAUTERN, Germany — An ace of spades embellished with a Russian-made SA-17 could tip a game of Texas Hold ‘em in a soldier’s favor, while also helping him identify a surface-to-air missile system on the ground.

The Army has a new line of playing cards featuring military weapons used by Russia, China and Iran — countries the Pentagon has identified as potential threats.

The cards are proving so popular that more than 70,000 decks have been distributed since the first were printed this summer. Army Training and Doctrine Command’s intelligence branch developed “Worldwide Equipment Identification” cards to help soldiers learn about the weapons and vehicles, the Army said in a statement this week.

The command distributed an initial print run of 9,800 packs of cards featuring Chinese vehicles and weapons in July. Supplies ran out after only three weeks.

“That’s when I think it just went viral,” said Fred Batchelor, a director in TRADOC’s intelligence section, the statement said.

Anyone can have the cards, he said.

“You don’t have to have a security clearance, you don’t have to be assigned to a special unit,” he said in the statement. “Everybody has access to these cards, and I think that’s what really sold them.”

To date, TRADOC has released 30,000 decks of Chinese weapons-themed playing cards and 38,000 packs of the Russian ones to service members. The 33,000 decks featuring Iranian equipment are the latest to be released, available to units since Oct. 9.

The 10 of hearts in the Iranian deck, for instance, shows a multiple rocket launcher.

More decks could be printed in the future, including some featuring vehicles and weapons belonging to friendly forces and adversaries, Batchelor said.

Soldiers and units can order the cards through their installation training support centers.

Playing cards has long been a favorite pastime for U.S. troops in major conflicts. The decks have changed as U.S. adversaries have changed.

During the Iraq War, the Pentagon’s “55 most wanted” comprised a deck of key Iraqi leaders U.S. troops were supposed to pursue, kill or capture. Saddam Hussein was depicted on the ace of spades.

As a supplement to the physical cards, a digital card memory game that soldiers can access on their devices is also available at TRADOC’s App Gateway, located at https://public.tag.army.mil.