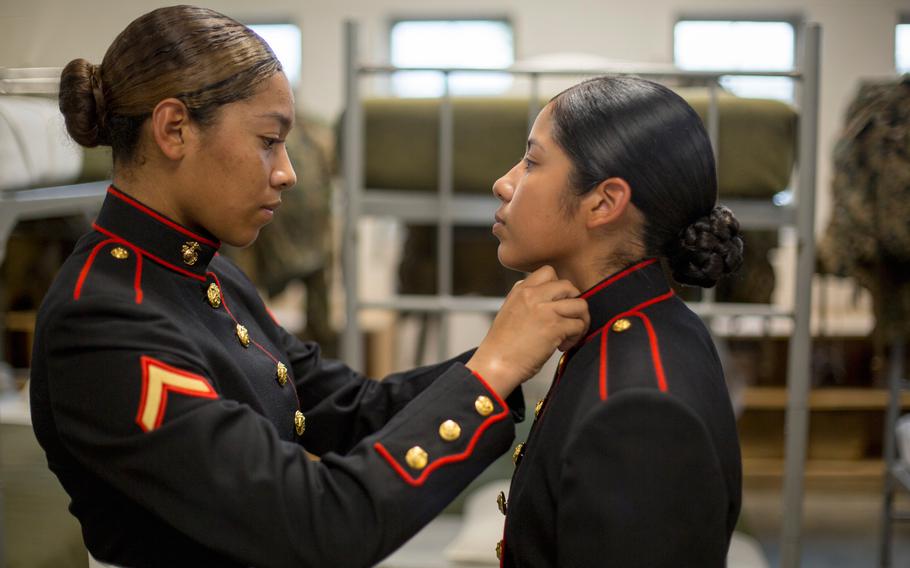 WASHINGTON — Whether all Marines will be allowed to use umbrellas and female Marines can wear silver earrings with their uniform are among some of the new policy recommendations being considered by the service.

The Marine Corps Uniform Board is considering eight recommendations for issues including hairstyles, jewelry, and uniform items such as belt waist plates.

Active-duty and reserve Marines are being asked to personally weigh in on these uniform policy proposals via a survey that started Monday. The responses will help the board in their recommendations, according to a Marine Corps statement.

“Marines are able to concur with the proposed changes, maintain the status quo with no changes, or skip proposals entirely,” the statement said of the survey.

For umbrellas, the board is considering a recommendation that all Marines be allowed to carry and use small, black umbrellas, which only female Marines are permitted to do now.

Two of the recommendations in the survey are for hairstyles, with one for female Marines with medium or long hair to be able to wear ponytails or braids during physical training, except if the activity is considered “combat training” or a safety hazard. During physical training, only women with medium-length hair can wear it in a “half ponytail,” or a style where the top half of the hair is pulled back from the face in a ponytail and the bottom half of the hair hangs loose.

The other hairstyle recommendation under consideration would require female Marines with long hair to keep it “properly secured up” at all times when they are wearing the blouse of their combat utility uniform, even during physical training activities such as the combat fitness test. Women with medium-length hair would be able to have it in a half ponytail while wearing the blouse during physical training activities.

The board is also considering approval for four supplemental uniform allowance requests for Marines in specific duties including at Recruiter School and drill instructors at Officer Candidate School.

They are also considering the recommendation that all Marines ranked E-5 and below wear the blue dress gold waist plate with the Marine Corps emblem in the center, which is now only worn by Marines ranked between E-4 and E-5.

The commandant of the Marine Corps will make the final decision on the uniform policy recommendations.

Marines can access the CAC-enabled survey at go.max.gov/UniformBoard218 and have until April 29 to complete it.