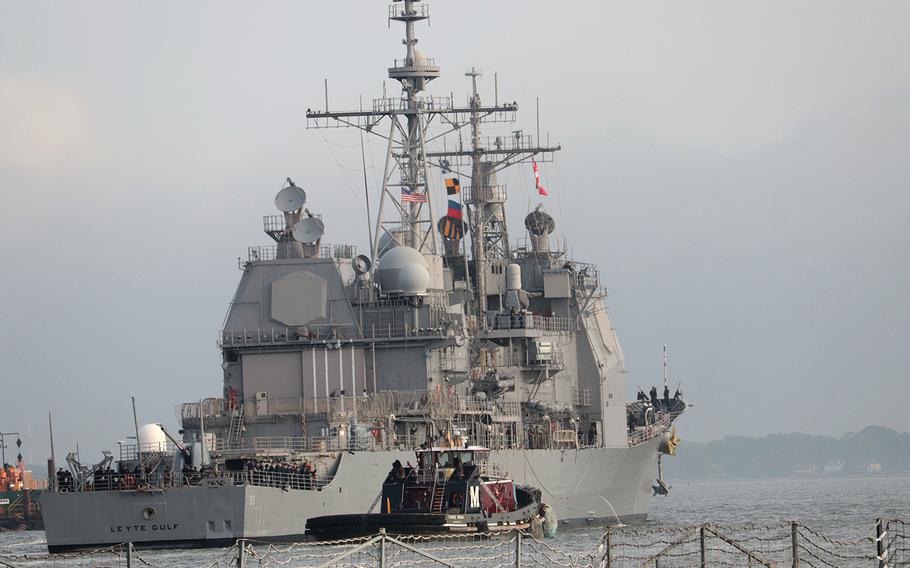 The USS Leyte Gulf, pictured here in May, 2018, and the USNS Robert E. Peary collided off the southeastern coast of the U.S. on Tuesday, Feb. 5, 2018, during a training exercise. (Garrett LaBarge/U.S. Navy)

WASHINGTON — Two ships collided off the southeastern coast of the U.S. on Tuesday evening during a training exercise, causing only minor damage to the ships and no injuries to personnel.

The USS Leyte Gulf, a guided-missile cruiser, and the USNS Robert E. Peary, a dry cargo ship, were conducting a replenishment-at-sea when the sterns touched about 4 p.m. EDT, according to a statement by U.S. Fleet Forces Command.

The ships were able to operate safely afterward, according to the statement. The damage will be assessed at Naval Station Mayport in Jacksonville, Fla., the spokeswoman said. The Leyte Gulf is set to pull into port Wednesday, joining the Peary, which already arrived.

The damage to the Peary was an 8-inch gash above the waterline, and the Leyte Gulf had minor damage to its flight-deck netting and two lifeboats dislodged, the U.S. Naval Institute News reported Tuesday. None of the ships took on water.

The ships were participating in a Composite Training Unit Exercise as part of the Abraham Lincoln Carrier Strike Group for a future deployment, the spokeswoman said.

The training exercise “just makes sure that they can work cohesively together,” she said.

The collision will be investigated by U.S. Fleet Forces Command and Military Sealift Command, according to the statement.