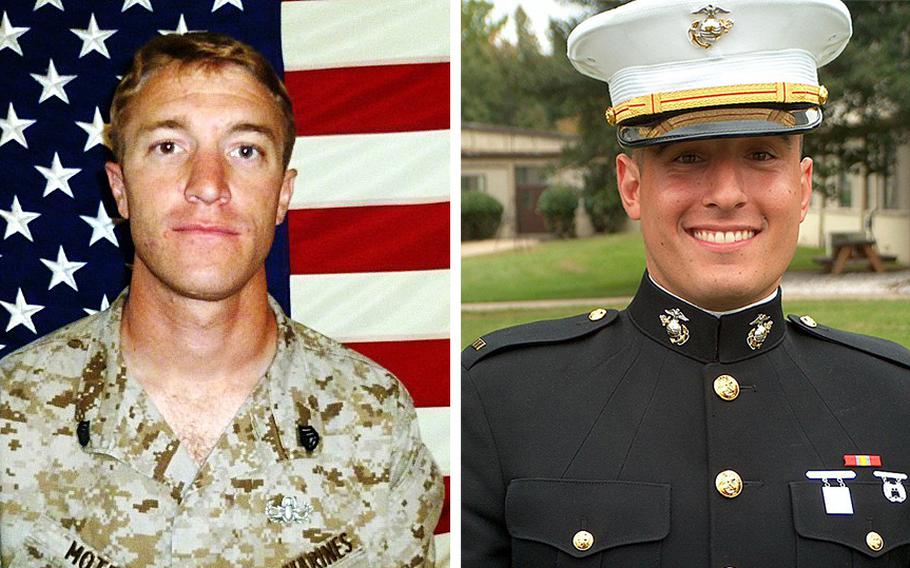 WASHINGTON – Two Marine Corps special operators were posthumously awarded the Navy Cross on Saturday for their actions during an insider attack in Afghanistan.

Capt. Matthew Manoukian and Staff Sgt. Sky Mote were assigned to the 1st Marine Special Operations Battalion in support of Operating Enduring Freedom when they came under hostile fire from an Afghan police officer inside their tactical operations center in Helmand province, Afghanistan on Aug. 10, 2012, according to a Marine Corps press release.

Manoukian, the team commander, and Mote, an explosive ordnance disposal technician, each received the Navy Cross because they intentionally exposed themselves to hails of gunfire to enable their comrades to escape the shooter.

Manoukian, 29, from Los Altos Hills, Calif., was working in the operations center when AK-47 assault rifle bullets ripped through the walls and partitions of the operations room. He immediately ordered his Marines to move out of harm’s way as he engaged the enemy. After another Marine was critically wounded, Manoukian made himself the shooter’s primary target to protect other Marines. He continued engaging the enemy, despite being outgunned, until he was mortally wounded, according to a Marine Corps account of the assault.

“Manoukian courageously drew heavy fire upon himself, disrupting the enemy pursuit of his comrades and providing them the security needed to get to safety, ultimately saving their lives,” the Marine Corps said in the press release.

During the rampage, Mote, 27, from El Dorado, Calif., stepped forward and attracted the shooter’s attention, which halted the enemy’s pursuit of other Marines. He remained exposed and engaged the shooter who was only five yards away. Mote kept up the attack, despite having been shot, until he was killed, according to a Marine Corps description of Mote’s actions.

“Mote’s heroic and selfless actions halted the enemy assault on his teammates enabling their escape, which ultimately forced the enemy to withdraw. Mote’s selfless act safeguarded his comrades from being killed or injured,” the Marine Corps said in the press release.

Marine Gunnery Sgt. Ryan Jeschke, 31, of Herndon, Va., was also killed in the attack, according to the Defense Department.

The Afghan gunman fled the scene and joined the Taliban, according to reports.

The incident in which Manoukian and Mote earned their awards for bravery was just one of many involving Afghan police and army personnel turning their guns on U.S. servicemembers and NATO forces. There were 44 insider attacks in 2012 alone, and they resulted in 61 coalition deaths. Those 61 fatalities constituted 15 percent of total coalition deaths that year, according to the Long War Journal, which compiles statistics related to the war in Afghanistan.

The U.S. military referred to these incidents as “green on blue” attacks. The alarming rate of occurrence eventually compelled commanders to implement a series of new security procedures in the latter part of 2012 to mitigate the risk. The number of insider attacks has declined significantly since the measures were put in place.

The Navy Cross is the second-highest award for valor that a Marine can receive; just below the Medal of Honor. It is rarely given out, and must be approved by the Secretary of the Navy before being awarded. Only 16 Marines, including Mote and Manoukian, have received the Navy Cross for actions undertaken during Operation Enduring Freedom. In the seven-year history of Marine Special Operations Command, only two other Marines attached to MARSOC have received the award, according to the Marine Corps.

Major Gen. Mark Clark, the commander of MARSOC, presented the awards to the families of Manoukian and Mote during a ceremony at Camp Pendleton, Calif. Saturday.