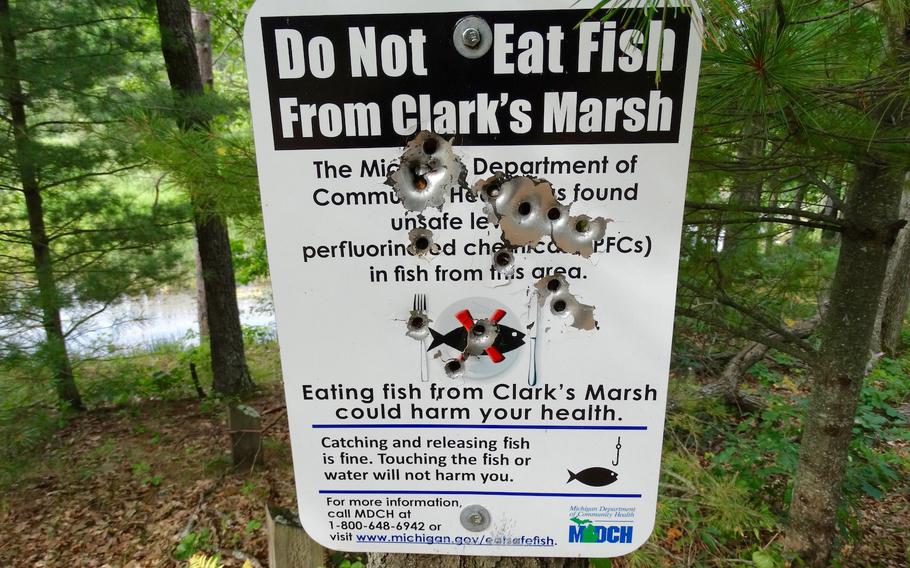 A sign at Clark's Marsh in Oscoda Township, Mich., warns of fish contaminated with PFAS/PFC chemicals leaching from the fire training area at the nearby former Wurtsmith Air Force Base grounds. Chemicals from fire fighting foam used on the base have created toxic plumes that are leaching through the local groundwater. (TNS)

“This is a national health crisis,” Rep. Debbie Dingell, D-Mich., said during a news conference with Rep. Dan Kildee, D-Mich., to announce their plan to combat the chemicals, commonly known as PFAS. “Today nearly all Americans, including newborn babies, have PFAS in their blood, and up to 110 million people may be drinking PFAS-tainted water.”

More than 100 Army installations were discovered to have drinking water contaminated with PFAS, according to a recent report from the Army conducted by the Environmental Working Group, a nonprofit organization. The highest levels were found in Fort Leavenworth, Kan., National Guard’s Joint Training Base in Los Alamitos, Calif., and Belmont Armory, Mich.

The Environmental Protection Agency designates per- and polyfluoroalkyl substances, or PFAS, as “a category of man-made chemicals that are found in everyday items including food packaging, nonstick products, and stain repellent fabrics.” PFAS chemicals build up in the human body over time and are not able to be broken down by the environment.

Jennifer Sass, a senior scientist with the nonprofit National Resources Defense Council, spoke at the news conference, explaining PFAS can be harmful, even in small quantities.

“PFAS have been linked to cancer and other deadly diseases,” she said.

Kildee and Dingell want PFAS guidelines to be included into the final National Defense Authorization Act for fiscal year 2020. This would be an integral starting point in the beginning phases of cleanup operations at PFAS contamination sites, Dingell said. The guidelines would also hold those corporations designated as polluters to be held accountable for PFAS contamination, by making further contamination against the law.

Dingell talked about three provisions to address PFAS chemicals in the now House-passed NDAA. These amendments designate PFAS as a harmful and hazardous substance to human health. The designation would allow PFAS to be cleaned up under the EPA’s Superfund Program, which is responsible for cleaning up the nation’s most contaminated land. The designation would also ban the use of PFAS chemicals in materials used to manufacture the military’s Meals Ready to Eat, or MREs, and require military installations to cooperate with state governments when PFAS contamination is detected on the facilities.

Kildee is the founder and co-chairman of the PFAS Task Force, a bipartisan congressional group that works together to educate the public, create legislation to address PFAS contamination in the United States. The task force works with members of Congress to address the PFAS public health threat. The House NDAA included several provisions that would set aside money for clean up and take preventative measures from furthering PFAS contamination.

The provisions include phasing out the use of PFAS in firefighting foam by 2025, boosting funding for the national Centers for Disease Control and Prevention’s nationwide health study on PFAS, provide the U.S. Geological Survey with $5 million to conduct a nationwide sampling for PFAS in the environment and require the Government Accountability Office review the Department of Defense’s response to PFAS contamination in and around military bases.