Trump: ‘We are going to have the Space Force’ 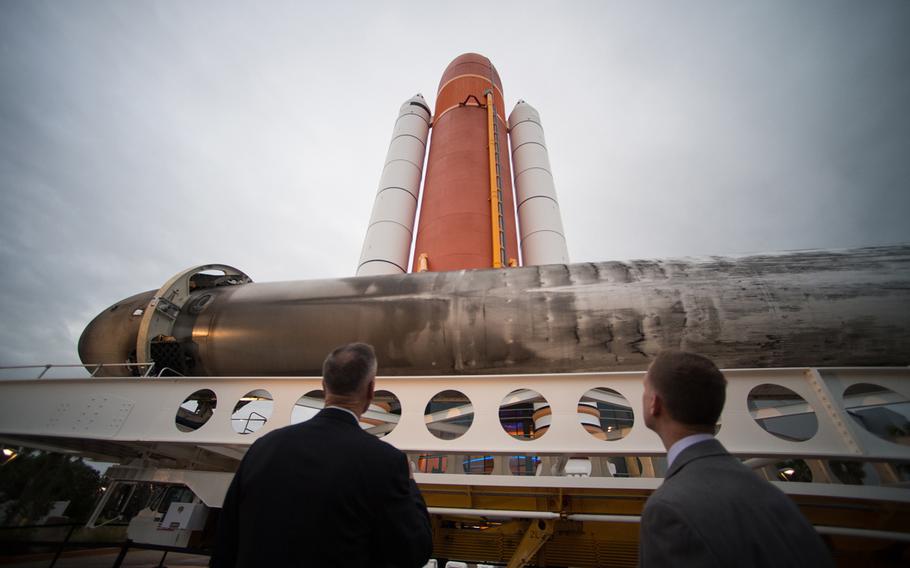 WASHINGTON — President Donald Trump said Monday that he was directing the Pentagon to begin preparations to build a sixth independent military service focused on U.S. efforts to ensure superiority in space.

The president said the new force would be part of his administration’s efforts to return “American dominance” to space, as he vowed to send new missions to the moon and eventually to Mars.

Trump has floated the idea of an independent space branch of the military previously, mirroring an effort last year in the House of Representatives to form a new service that lawmakers dubbed the Space Corps.

But that initiative was ultimately scrapped from the final version of the 2018 National Defense Authorization Act, as senators cited opposition from top Pentagon officials including Defense Secretary Jim Mattis and Air Force Secretary Heather Wilson.

A defense official said the Pentagon would work to implement Trump’s instructions but offered no specific details about planning for the new service that the president announced. The Air Force declined comment on the announcement, and neither Trump nor the White House provided additional details about the proposed Space Force on Monday.

“The Joint Staff will work closely with the Office of the Secretary of Defense, other [Defense Department] stakeholders and the Congress to implement the president's guidance,” the defense official said in an emailed statement.

The Air Force declined comment Monday on the announcement, and neither Trump nor the White House provided additional details about the proposed Space Force.

In his remarks at Cape Canaveral, Trump said the new force would be “separate, but equal” from the other military branches. Currently, the Air Force is responsible for the vast majority – roughly 80 percent – of the military’s space ventures.

He said the force would ensure the United States retains space superiority over rivals, namely China and Russia.

Trump, in the middle of his remarks, ordered Marine Gen. Joseph Dunford, chairman of the Joint Chiefs of Staff, to oversee the building of the new force.

The president signed an executive order Monday following his speech, but a summary of the order provided by the White House makes no mention of Trump's Space Force announcement.

The announcement comes as the Pentagon continues to study its efforts in space, which it has identified as a “warfighting domain.” Deputy Defense Secretary Patrick Shanahan is scheduled to deliver a final review of the Pentagon’s space enterprise to Congress by Aug. 1. The review is to include Shanahan’s recommendations for how the Defense Department should organize its space programs to “increase performance,” according to a Pentagon memorandum.

The review of how the Pentagon’s space enterprise is organized was to include an evaluation of last year’s House proposal of Space Corps as a military branch, according to the 21-page memorandum signed by Shanahan and dated March 1. Shanahan did not offer a position on the proposed military branch in the document.

However, Mattis has stated he opposes the creation of a Space Force. In October, he penned a letter to lawmakers advising it was not the optimal time to create a new military service.

“I strongly urge Congress to reconsider the proposal of a separate service Space Corps,” Mattis wrote. “I believe it is premature at add additional organization and administrative tail to the department at a time I am trying to reduce overhead.”

More recently, he told reporters that it would be prudent for officials to wait for the results of Shanahan’s ongoing review before making decisions about the Defense Department’s future in space operations.

Senior Air Force officials, too, have stated opposition to the development of an independent military service focused on space.

Any new military branch would have to be approved and funded by Congress, some experts said.

“The president can't just create a new military service on his own,” said Todd Harrison, the director of the Aerospace Security Project and a defense budget analysis for Washington think tank the Center for Strategic and International Studies. “It requires congressional authorization.”

Harrison, on Twitter, added that funding a new military service would not likely require a massive budget increase because much of the infrastructure and manpower already exists. Creating the new force would simple streamline its command structure, he said.