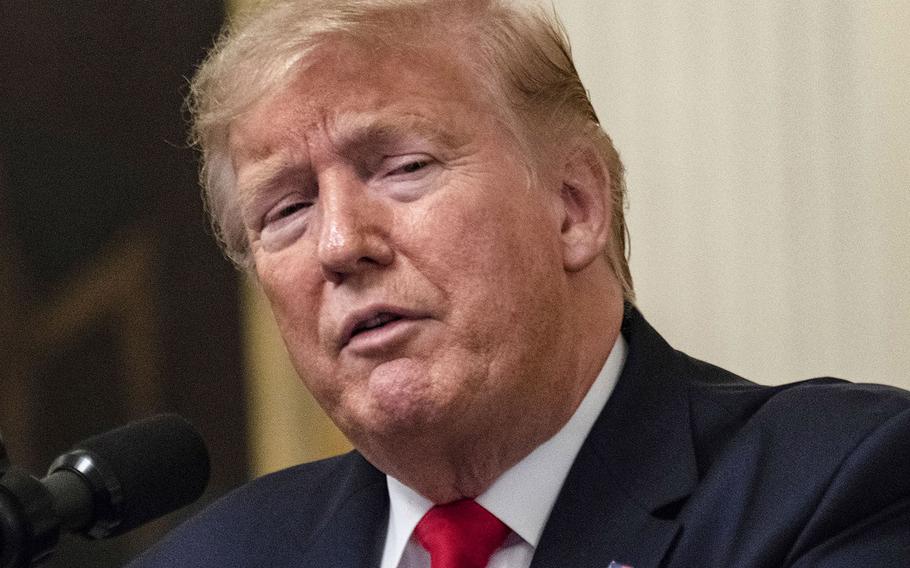 WASHINGTON — President Donald Trump on Wednesday issued his promised veto of the defense spending and policy bill that was passed easily by Senate and House lawmakers earlier this month, setting up votes to override Trump’s attempt to kill the legislation.

Trump signed the veto of the fiscal year 2021 National Defense Authorization Act on Wednesday, his last day to do so, after spending months warning he would sink the bill without the changes that lawmakers declined to make before passing it. Trump cited measures in the $740.5 billion bill limiting his ability to withdraw troops from Afghanistan and Germany, beginning a process to rename bases honoring Confederate Civil War generals, and for its lack of language killing liability protections for social media companies.

Trump cited those and other issues that he has with the bill in a message to the House announcing he would not support the legislation, calling it “a ‘gift’ to China and Russia” without explaining how it would benefit either.

“For all of these reasons, I cannot support this bill,” Trump said in the announcement. “My administration has taken strong actions to help keep our nation safe and support our service members. I will not approve this bill, which would put the interests of the Washington, D.C. establishment over those of the American people.”

The House and Senate now must vote again on the bill. If two-thirds of members in both chambers approve the override, the NDAA will become law without the president’s approval. Top lawmakers in the House and Senate indicated this week that the House would take up the measure on Dec. 28 and the Senate would vote the following day if the lower chamber approved the override.

Both chambers passed the bill with far more than the two-thirds approval needed to override a veto. The NDAA passed 84-13 in the Senate and 335-78 in the House. However, it was not immediately clear how many lawmakers would change their votes following Trump’s rejection of the bill.

Some Trump allies who supported passage of the bill have since pledged not to override the president’s veto, including the House Minority Leader Kevin McCarthy, R-Calif. McCarthy said last week that he expected other Republican House members would “stand with the president” on his decision to nix the NDAA.

In a statement Wednesday, Senate Armed Services Committee Chairman Jim Inhofe, R-Okla., wrote the bill was “absolutely vital to our national security and our troops.”

“Our men and women who volunteer to wear the uniform shouldn’t be denied what they need — ever,” Inhofe, a staunch Trump ally, said in the statement issued shortly after the veto was announced. “I hope all of my colleagues in Congress will join me in making sure our troops have the resources and equipment they need to defend this nation.”

“If the FY21 NDAA does not become law, more than 100,000 federal employees will be deprived of the paid parental leave benefits they deserve, necessary military construction projects will not move forward on schedule, and our service members who are in harm’s way defending our country’s principles will not have access to the hazard pay they are owed,” Smith said in a statement. “While the president may not care about our service members and their families, Congress still places an immense value on their service and sacrifice.”

Among the other critical measures included in the NDAA, the bill would authorize a 3% pay raise for troops, an increase of more than 5,000 military troops, and provide funding for a new initiative aimed at checking China’s military power in southeast Asia.

Trump initially pledged to veto the legislation over language that would force the Army to strip the names of Confederate generals from 10 southern bases within three years. But, more recently, he added other complaints about the bill, which Congress has passed for 60 consecutive years.

On Wednesday, he called the attempts to rename military bases disrespectful to millions of U.S. troops who have served at them since they were established before World War I and World War II.

“I have been clear in my opposition to politically motivated attempts like this to wash away history and to dishonor the immense progress our country has fought for in realizing our founding principles,” Trump said of efforts to strip the bases of the names of Confederate leaders.

Trump said his veto was also partially inspired for lawmaker’s failure to include within the NDAA a measure repealing Section 230 of the Communications Decency Act, which protects social media giants against liability for postings by their users. In recent days, Trump has claimed Section 230 is favorable to China. He said failure to repeal it “facilitates the spread of foreign disinformation online.”

Lawmakers, including Inhofe, have dismissed inclusion of such a measure as unrelated to military issues. Inhofe said he supports repealing Section 230 but he has repeatedly balked at Trump’s 11th-hour insistence it be added to the NDAA.

Other top lawmakers, including Senate Majority Leader Mitch McConnell, R-Ky., have taken issue with Trump’s assertion the bill would benefit China. Last month, McConnell said the bill would ensure American troops were “ready to deter China and stand strong in the Indo-Pacific.”

Trump also said his veto was due to the measures in the bill that require the Pentagon to issue an analysis to Congress that shows troops can be pulled out of Afghanistan and Germany without harming U.S. national security. Trump had previously ordered partial withdraws of U.S. forces in both of those countries.

The bill was the ninth that Trump has vetoed as president. None of his previous vetoes were overturned.

House and Senate lawmakers have spent recent days lobbying the White House to change Trump’s mind about issuing a veto on the NDAA. Inhofe has issued almost daily tweets and statements praising the NDAA and urging Trump to sign it into law. Inhofe tweeted Saturday that the bill would prove beneficial to the Pentagon and all Americans who rely on the military for protection.

Lawmakers have championed the bill as critical legislation and a rare example of bipartisanship in an increasingly divided Congress. Smith has warned that without a veto override the measure would probably be scrapped and the new Congress set to begin work next month would have to build a new bill.

Rep. Mark Warner, D-Va., called Trump’s veto “unconscionable” in a statement issued shortly after the White House announcement. Like Smith, Warner said he anticipated lawmakers will vote to override it.

“The president’s decision to veto this bipartisan legislation on his way out the door poses a serious threat to U.S. national security. It jeopardizes mission readiness and the well-being of our U.S. service members and their families, as well as military construction projects, investments in innovation and technology, and other critical defense priorities.”