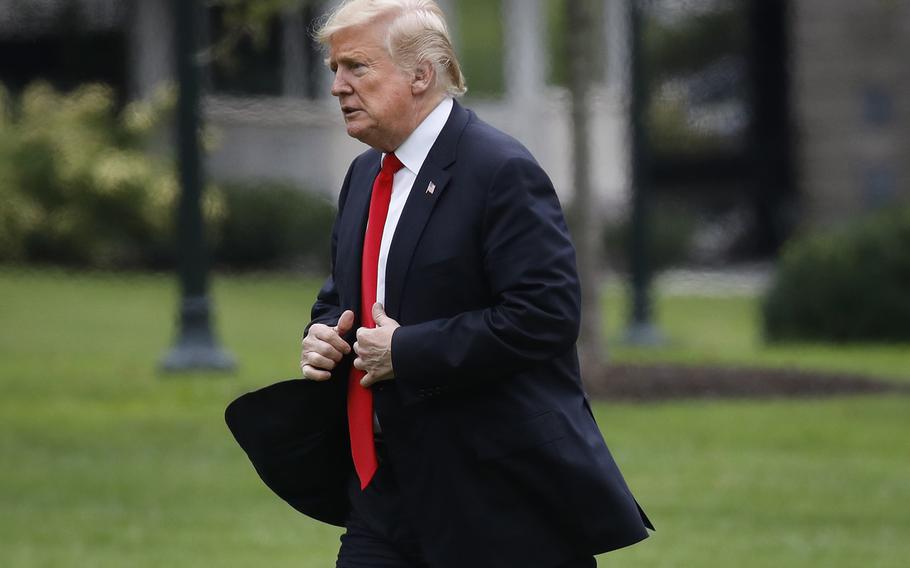 President Donald Trump walks across the South Lawn at the White House in Washington on Thursday, Sept. 27, 2018. (Jacquelyn Martin/AP)

WASHINGTON – President Donald Trump on Friday signed into law a $670 billion defense spending measure that includes money for the largest boost to servicemembers’ pay in nearly 10 years and increases in troops, equipment and weapons for the 2019 fiscal year.

The so-called “minibus” appropriations measure, H.R. 6157, is part of a larger package of more than $850 billion to fund labor, health and human services and education priorities. It also funds priorities directed in the 2019 National Defense Authorization Act.

Trump’s approval Friday marks the first time in about 10 years that the Defense Department won’t operate under a temporary funding measure, otherwise known as a continuing resolution, for the start of its fiscal year. The 2019 fiscal year begins Monday.

“Today, I signed into law important legislation to rebuild our military, protect our communities, and deliver a better future for all Americans,” Trump said Friday in a statement.

“America is being respected again – and our people are being protected again. I am pleased to have signed this bill into law,” he said.

“It is a monumental achievement. By funding our military in full and on time, we can begin to restore its strength, agility, and effectiveness. The president was right to make rebuilding our military a high priority,” Rep. Mac Thornberry, R-Texas, chairman of the House Armed Services Committee, said in a statement. “As I have said before, the task before us now is to make full, on time funding of our military the rule in Washington, and not the exception.”

“This package continues a historic increase in funding for our nation’s defense, helping the president deliver on his commitment to rebuild the military,” Sen. Richard Shelby, R-Ala., and chairman of the Senate Appropriations Committee, said Friday in a statement.

Trump signed the 2019 NDAA, H.R. 5515, into law Aug. 13, which ushered through a series of new policy reforms, such as revamping the military’s “up or out” promotion system and policies to reign in sexual misconduct and domestic abuse among the ranks. The $716 billion NDAA also authorizes a 2.6 percent pay raise for servicemembers, as well as new purchases of aircrafts, ships, submarines and weapons.

Thornberry had said this week that he was confident Trump would sign the legislation into law.

“If you step back and look what are the two biggest accomplishments of the Trump administration, it’s been economic growth and rebuilding the military,” Thornberry said Wednesday. “Signing this bill that we are going to pass today is the most significant step towards rebuilding the military because they will have a whole year to efficiently use that money.”

Several times this year, Trump threatened a veto of spending measures if Congress didn’t include significant funding for a southern border wall, a move that could have triggered a government shutdown. But later Wednesday, Trump said he would keep the government open.

H.R. 6157 also includes a continuing resolution to fund agencies that aren’t covered by the minibus appropriations bill until Dec. 7 to avert a partial government shutdown.

Lawmakers have also lauded the plan’s boost to pay, troop levels, and equipment, including 18 C-130J aircraft, 13 V-22 aircraft and the upgrade of 135 Abrams tanks.