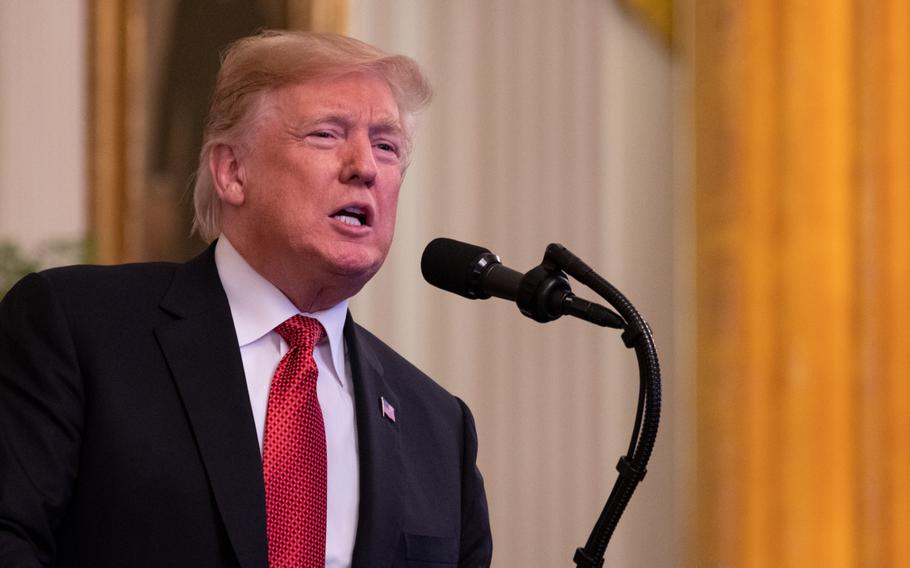 WASHINGTON — President Donald Trump’s comments Wednesday on the next defense budget apparently caught some top White House officials off guard, and triggered confusion about what to expect for the Pentagon’s spending plans in 2020.

In comments at the tail end of a Cabinet meeting Wednesday, Trump directed a roundtable of his secretaries to cut 5 percent from their department budgets for the next fiscal year, which begins Oct. 1, 2019. Defense Secretary Jim Mattis, traveling in Asia, was not at the meeting.

However, Trump didn’t elaborate whether the Pentagon would be included in the “one-year nickel plan” to cut 5 percent or a different percent from its budget. Instead, Trump said the defense budget would be $700 billion for fiscal year 2020, seemingly signaling a 2.2 percent cut when he compared that figure to $716 billion for national security spending in fiscal year 2019.

“This caught administration officials by surprise,” said Mark Cancian, a senior adviser with the Washington think tank Center for Strategic and International Studies. “It could be read as a cut to the defense budget. Or it could be read as an affirmation of the existing plans.”

In February, congressional lawmakers reached a two-year spending deal to lift budget caps to $700 billion for fiscal year 2018 and $716 billion for 2019. In August, the 2019 National Defense Authorization Act, or NDAA, which provides direction for the $716 billion budget, was passed, followed by an appropriations measure last month.

The NDAA includes national security budgets for several agencies, including the Defense Department and others such as the Department of Energy.

“I read his comment to simply mean that he intends to keep defense spending at or above $700 billion a year, which is roughly the amount of spending that was approved by Congress in the last two NDAAs,” said Scott Anderson, a governance studies fellow at the at the liberal-leaning Brookings Institution, another Washington think tank.

When it comes to just the Defense Department’s budget and its war fund, known as its Overseas Contingency Operations fund, the Pentagon had already projected that its budget request would be $701 billion for fiscal year 2020. By comparison, the 2019 fiscal year request included $686 billion for the defense base budget and war fund.

“We know what the budget, the new budget is for the Defense Department, it will probably be $700 billion,” the president said Wednesday in the Cabinet meeting before White House news reporters. “I brought it up to $700 (billion) and then $716 (billion) was to build new ships. We’re building new incredible submarines, the finest in the world, the most powerful in the world, anywhere, ever. We are doing things that we have never done on this scale, so that included a lot of rebuilding of our military. So despite that, I’m going to keep that” at a $700 billion defense budget.

White House and Pentagon officials declined to elaborate specifically on the comments Thursday. A Pentagon spokeswoman said it was premature to discuss fiscal year 2020 budget issues, referring comment to the White House.

“The President has been clear that he is serious about cutting spending, and that was the message he reiterated to his Cabinet yesterday,” a senior administration official said Thursday.

For current Pentagon spending to stay on track with inflation next year, the Pentagon budget would have to be closer to $730 billion, Cancian said. If Trump was suggesting this figure should come down to $700 billion, that would be a 4 percent spending cut, he said.

Such a dramatic slash in spending would threaten pay raises for servicemembers and include cuts to new programs and acquisitions, Cancian said. For example, spending could decline for ship building, aircraft acquisitions and other plans. Among some possible scenarios, a 2.4 percent pay raise could get reduced to 2.1 percent or less, or there could be reductions to modernization programs for long-range strike bombers and the Army could have to pull back on spending for its vehicles programs.

“Two things get very hard… first new initiatives would be almost stopped and existing programs would be cut back,” Cancian said. “It would really stifle new initiatives. I think it would stifle the ability to move new programs from development into production.”

However, if Trump’s comments referred to the existing $701 billion projection for fiscal year 2020, that means the Pentagon will still be under pressure to find savings, but not as dramatic as his comments Wednesday might have suggested.

Either way, the comments have now muddied the waters when it comes to defense budget negotiations for 2020, Cancian said.

“The president’s statement disrupts what had been thought to be a stable and predictable process,” he said.

Trump has been under rising pressure to address increased spending under his administration.

This week, the Treasury Department revealed the U.S. deficit, which is the shortfall between federal revenue and spending, reached $779 billion in fiscal year 2018, a 17 percent increase from a year earlier. The deficit figure marks a six-year high.

Trump conceded tough decisions were made to increase defense spending in recent years.

When lawmakers return for a new congressional session in January, they will first need to address spending caps that are slated to return in 2020 under the Budget Control Act.

The Budget Control Act of 2011 installed spending limits for defense and non-defense spending until 2021. Though lawmakers lifted those spending caps for 2018 and 2019, those limits return for the 2020 fiscal year.

The spending cap is slated to decrease the defense budget to $576 billion for the 2020 fiscal year, if no action is taken. And if no deal is reached and budget caps are exceeded in the new fiscal year, it raises the threat of sequestration – automatic, across-the-board budget cuts.

That “stands to shape the debate over Pentagon spending next year,” said Molly Reynolds, a governance studies fellow at the Brookings Institution.