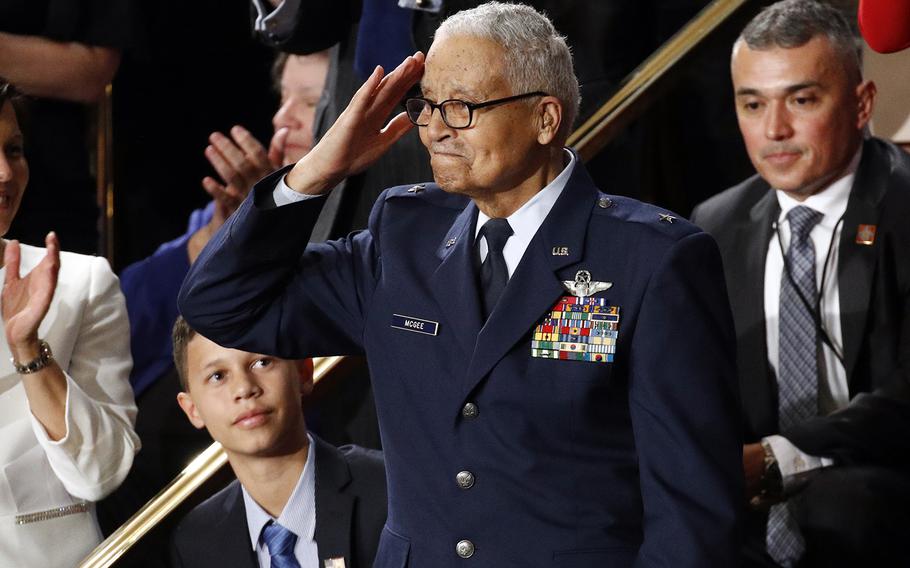 Tuskegee airman Charles McGee, 100, salutes as his great grandson Iain Lanphier looks on after President Donald Trump praised McGee for his service during Trump's State of the Union address to a joint session of Congress on Capitol Hill in Washington, Tuesday, Feb. 4, 2020. (Patrick Semansky/AP)

WASHINGTON — President Donald Trump on Tuesday pinned a single star on each shoulder of 100-year-old Tuskegee Airman Charles McGee, giving the veteran of World War II and the wars in Korea and Vietnam an honorary promotion to brigadier general.

Trump announced the promotion, which was approved by Congress in December, during his third State of the Union address Tuesday evening.

"Earlier today, I pinned the stars on his shoulders in the Oval Office," Trump said during the address. "Gen. McGee: Our nation salutes you. Thank you, sir."

McGee is among the last survivors of the Tuskegee Airmen, the famous group of the first African-American military pilots and air corps personnel whose success in World War II was considered critical to the eventual racial integration of the U.S. military after the war.

After 30 years of service on active duty, including more than 400 combat flights, McGee retired from the Air Force as a colonel in 1973. He lives in Bethesda, Md.

“At first I would say ‘wow,’ but looking back, it would have been nice to have had that during active duty, but it didn’t happen that way,” McGee said Tuesday after the White House ceremony, according to an Air Force release. “But still, the recognition of what was accomplished, certainly, I am pleased and proud to receive that recognition and hopefully it will help me carry on as we try to motivate our youth in aviation and space career opportunities.”

McGee’s great-grandson hopes to follow in his footsteps as a military leader. Trump said during the address that 13-year-old Iain Lanphier wants to join the U.S. Space Force, the new, sixth military branch long championed by Trump and established late last year.

"Iain has always dreamed of going to space,” Trump said of the Scottsdale, Ariz., eighth-grader who attended the speech alongside McGee. "He aspires to go to the Air Force Academy, and then, he has his eye on the Space Force. As Iain says, 'Most people look up at space, I want to look down on the world.'”

For now, he can look up to his great-grandfather. McGee flew 136 combat flights in the European Theater of World War II in 1944, mostly in P-51 Mustang and P-47 Thunderbolt fighter aircraft, according to his biography. He would go on to become a command pilot, fly some 6,300 hours including more than 1,500 in combat. In Korea, he flew more than 100 missions in a P-51. Later, in Vietnam, he commanded the 16th Tactical Reconnaissance Squadron and flew 172 combat missions in an RF-4 Phantom II photo-reconnaissance jet, according to his Air Force biography.

McGee amassed dozens of medals and awards throughout his career, including two Legions of Merit, three Distinguished Flying Crosses and a Bronze Star Medal. In 2007, President George W. Bush awarded him the Congressional Gold Medal, and in 2011, McGee was inducted into the National Aviation Hall of Fame in Dayton, Ohio.

“Charles McGee is a genuine American hero whose courage in combat helped save a nation, and whose legacy is felt to this day across the entire U.S. Air Force," Air Force Gen. David Goldfein, the service’s chief of staff, said in a statement. "It was an honor to witness his promotion and to thank him yet again for paving the way for today's Air Force. The Tuskegee Airmen continue to inspire generations of Americans.”