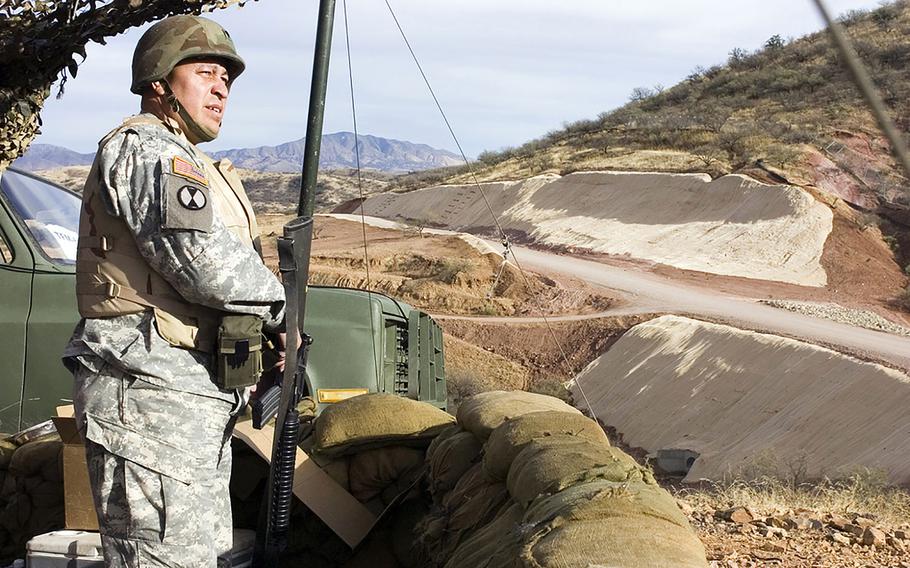 An Army National Guard soldier works as a member of an entry identification team watching the U.S./Mexico border near Nogales, Arizona on Jan. 17, 2007. (Jimm Greenhill/U.S. Army)

Several governors pledged support for the plan Wednesday, yet details remained light: No troop numbers, costs or timing on the deployments were available from federal or state officials by Thursday.

However, late Thursday, President Donald Trump said aboard Air Force One that he wants to see between 2,000 and 4,000 troops deployed.

“This was done on a whim,” said Rep. Ruben Gallego, D-Ariz., a Marine veteran irked by the announcement. “What budget is this coming from? What are they actually going to be doing?”

Trump, frustrated with inaction over his demands for a border wall, which was a central campaign promise, issued the proclamation Wednesday evening to request state governors dispatch National Guard troops to the border with Mexico to help curb illegal immigration.

With state cooperation, the document directs the defense secretary to support the Department of Homeland Security in securing the southern border to stop the flow of drugs and people.

It also directs leaders at the Departments of Defense and Homeland Security to submit a report within 30 days outlining what other steps can be taken.

“The situation at the border has now reached a point of crisis,” Trump said in the memo. “The lawlessness that continues at our southern border is fundamentally incompatible with the safety, security, and sovereignty of the American people. My administration has no choice but to act.”

Pentagon spokeswoman Dana White said Thursday that the Department of Homeland Security was the lead agency in helping plan for deployments of National Guard units to the border.

But the Pentagon also is working to stand up a Border Security Support Cell within the Defense Department to liaise with DHS officials, including determining how many troops would be needed and what department would pay for them. The cell will be led by Kenneth P. Rapuano, the assistant secretary of defense for homeland defense and global security, White said.

The effort, made under Title 32 of the U.S. code, requires the coordination of states to deploy the troops. It has been used in the past by former Presidents George W. Bush and Barack Obama. In 2006, more than 6,000 National Guard members were deployed in support roles to the southern U.S. border under Bush, while 1,200 were dispatched under Obama.

“It’s nothing new. President Bush did it – Operation Jump Start. President Obama continued it under Operation Phalanx ,” Rep. Michael McCaul, R-Texas, chairman of the House Homeland Security Committee, told Fox News on Thursday. “The new thing is that President Obama did stop the program and now President Trump is taking a bold decision to bring it back.”

In 2014, former Texas Gov. Rick Perry mobilized the National Guard to help secure the border, and troops remain there to this day. On Wednesday, Texas Gov. Greg Abbott, one of three border state governors to pledge support, said the state’s effort would continue.

“In my time as governor, Texas has maintained a continuous presence of National Guard members along the border,” Abbott said in a statement. “Going forward, Texas will continue to implement robust border security efforts.”

“Arizona welcomes the deployment of National Guard to the border,” Ducey tweeted Wednesday. “Washington has ignored this issue for too long and help is needed. For Arizona, it’s all about public safety.”

However, California Gov. Jerry Brown would only say his state was reviewing the proclamation.

Some Democrats had accused Trump of playing politics with the move.

“President Trump continues to use every cynical political trick in the book to ignite anti-immigrant fervor,” House minority leader Nancy Pelosi said Thursday in a statement. “His needless militarization of the border is motivated purely by political calculation, not our national security.”

Last week, Trump received a briefing on the matter from senior administration officials and directed for a strategy to confront the threat and protect America’s national security, the White House said.

On Tuesday, in a briefing with Department of Homeland Security Secretary Kirstjen Nielsen and Defense Secretary Jim Mattis and others, the mobilization of the National Guard was among the options discussed with Trump. During public comments, Trump later suggested troops would be dispatched to the southern border, followed by Wednesday’s proclamation.

Though the Department of Homeland Security said in December that arrests for illegal border crossings had reached a 46-year low, officials said those numbers are expected to tick up this spring.

“The threat is real… It’s time to act,” Nielsen said in announcing the plan. “The president has been frustrated. I think what you are seeing is the president taking his job very, very seriously in terms of securing our border.”