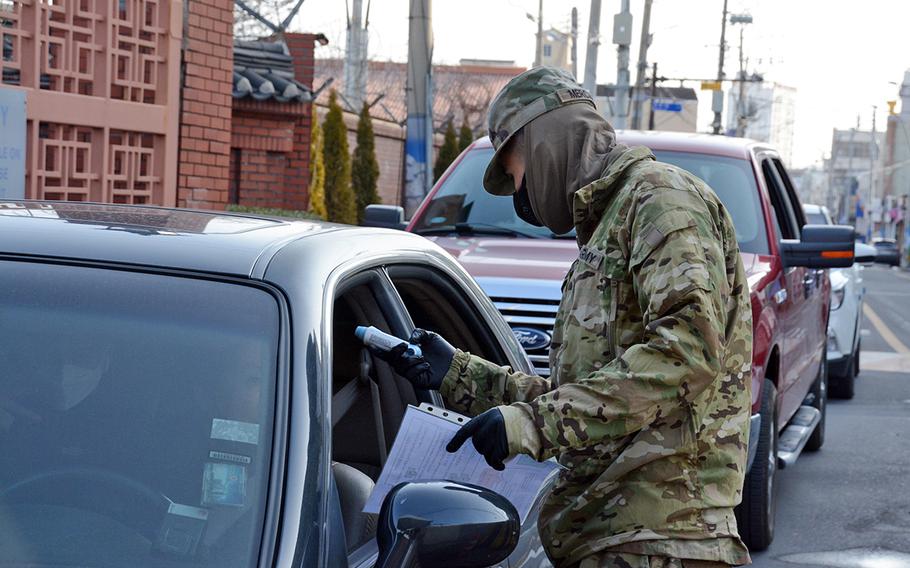 Defense Department officials are working to keep coronavirus from spreading onto military base in the United States, forcing troops returning from overseas deployments to endure multiple medical screenings before going home.

“Overall the broad impact to the U.S. military is very, very minimal,” said Army Gen. Mark Milley, chairman of the Joint Chiefs of Staff. “We hope to keep it that way.”

Milley and Defense Secretary Mark Esper on Monday outlined the preparations underway at military bases across the United States to protect service members and their families from the coronavirus outbreak, while also arranging to provide inter-government agency support.

Last week, a flight of 248 Fort Hood soldiers leaving South Korea for Texas was delayed in “an abundance of caution” as medical teams assessed whether two sick soldiers had coronavirus, base officials said.

The soldiers are part of the 1st Cavalry Division’s 3rd Brigade Combat Team, which began returning last month from a nine-month rotation to South Korea, where more than 3,000 coronavirus cases include one service member and his wife.

The two sick soldiers were eventually cleared as their symptoms were linked to food poisoning or air sickness, and the flight departed Korea, according to Fort Hood officials.

Medical teams screen soldiers’ health based on national Centers for Disease Control and Prevention guidelines before they leave South Korea, during a layover in Alaska and once they arrive at Fort Hood, said Lt. Col. Steven Lamb, a spokesman for III Corps, which commands Fort Hood. Then they can go home.

The soldiers were already considered low risk for contracting the virus, because they were stationed at Camps Casey and Humphreys in the northern region of South Korea. The virus has predominately been within the vicinity of Daegu, in the southern region of the Korean Peninsula.

Final flights home for Fort Hood troops are expected this week and “the command teams are ensuring soldiers understand not only the symptoms of the virus and how to seek help if necessary, but also that they follow basic mitigation strategies to prevent the spread of any illness,” Lamb said.

“We're also working to inform our soldiers and families about prevention measures. We will continue to evaluate current day-to-day operations to ensure the safety of all of our soldiers, family members and civilian personnel,” Lt. Col. Terence Kelley, a division spokesman, said in a statement.

All soldiers arriving to Fort Riley, whether from high risk areas or newly assigned to the base, are receiving in-person medical screening based on CDC guidelines within two hours.

So far, there are more than 100 reported cases of coronavirus in 11 states, The Associated Press reported of the respiratory disease that first took hold in China and began spreading to dozens of countries across the globe. While none of the U.S. cases have occurred within the military community, the six reported U.S. deaths from coronavirus occurred in Washington state about 50 miles north of Joint Base Lewis-McChord.

At that base, officials have canceled some large-scale gatherings, Milley said.

“We’re relying on local commanders to make decisions that are unique to their situation, because each one is different with regard to impact to the community,” Esper said. “What I’m prepared to do is resource them as need be.”

To better inform base residents about the virus, I Corps, which commands Lewis-McChord, will host a virtual town hall this week, said Lt. Col. Chris Hyde, I Corps spokesman.

"Leaders at JBLM will continue to monitor events associated with [the coronavirus] and will take all prudent measures necessary to ensure the safety of our service members, civilian employees and their families,” he said.

The major threat of the virus to military members remains overseas, primarily in Japan, northern Italy and South Korea, where regional commanders have limited access to military bases and restricted nonessential travel for troops. In Korea, some large-scale training exercises also were canceled, Milley said.

While military units around the world take defensive measures against the spread of the illness, medical labs for the U.S. Army Medical Research Institute of Infectious Diseases and the Walter Reed Army Institute of Research, located at Fort Detrick, Md., are coordinating with the Department of Health and Human Services to create a vaccine for the virus. In the past, these labs have joined efforts to combat emerging infectious disease outbreaks such as Ebola, MERS and Zika.

Some House lawmakers also began weighing in Monday on the military’s role in mitigating a stateside coronavirus outbreak. Rep. Ruben Gallego, D-Ariz., who is a member of the House Armed Services Committee, requested a briefing from the Pentagon on its response to the virus.

“As you are aware, this outbreak is already affecting our readiness abroad, and appears likely to affect the homeland in a significant way,” he wrote in a letter to Robert G. Salesses, deputy assistant secretary for homeland and defense integration and the Defense Security Cooperation Agency.

Rep. Mac Thornberry of Texas, the ranking Republican on the House Armed Services Committee, said Monday that he has concerns with the military’s ability to handle an outbreak at military bases at home and overseas.

“The military should have a seat at the table, but it's not going to be primarily up to the military to contain it,” he said, speaking at the Brookings Institution, a liberal-leaning Washington think tank.

As with the spread of Ebola, which began in 2014, Thornberry said the military showed it has unique capabilities that sometimes have to be brought in to contain a dangerous biological element.

“That does not mean that the military should be on the front lines,” he said. “One of my concerns is over the years, other elements of government have somewhat atrophied in a way so that we all automatically turn to the military to go solve problems, and I think we put them in a hard place.”