An American soldier is photographed through a night-vision goggle lens while conducting a raid in Baghdad in November 2007. (Seth Robson/Stars and Stripes)

An American soldier is photographed through a night-vision goggle lens while conducting a raid in Baghdad in November 2007. (Seth Robson/Stars and Stripes) 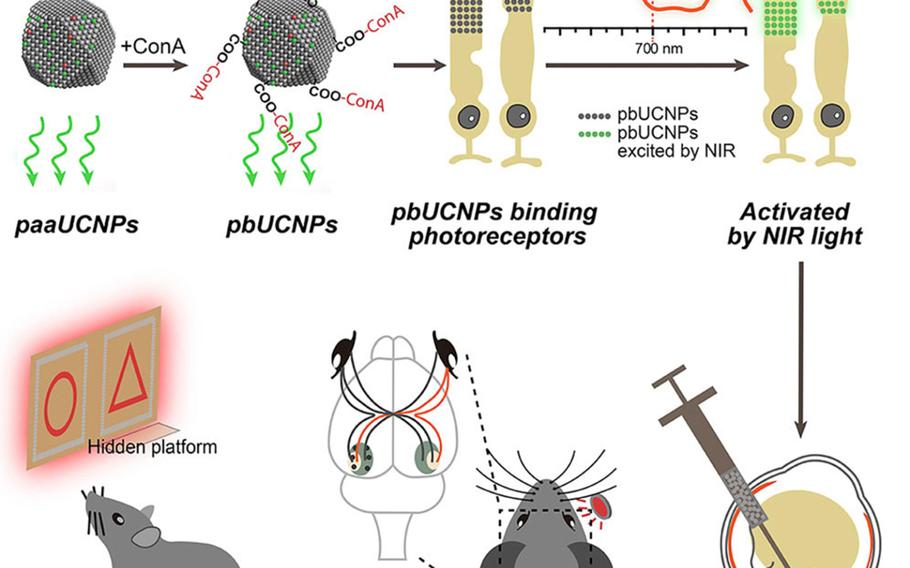 An illustration from the scientific journal Cell details how researchers were able to make mice see in the dark by injecting them with nanoparticles that convert near infrared light into visible light. (Cell)

Nanoparticle injections could give warriors the power to see in the dark without the bulky goggles worn by today’s troops during nighttime operations, according to an Arizona State University technology expert.

The process is explained in a paper published in February by researchers from the University of Massachusetts Medical School in Worcester, Mass., and the University of Science and Technology of China in Hefei.

Nanoparticles that convert near infrared light into visible light were injected into the eyes of mice, allowing them to see in the dark, the researchers wrote in a summary of their work.

They tested their process by training mice to swim through a maze following triangular signs. Mice injected with the nanoparticles were able to find their way out of the maze in the dark, the researchers said.

The research was a collaboration between Xue Tian, a Hefei-based vision physiology expert, and Gang Han, a Worcester-based nanoparticle expert.

“I definitely think it will work in humans,” Xue said, according to Science magazine.

The scientists found that the nanoparticles bound tightly to photoreceptors in the eyes of the mice and stayed in place for up to 10 weeks with no obvious lasting side effects, the magazine reported.

Nanoparticles would have an advantage over other night-vision technology if they could be safely injected into soldiers, Arizona State University engineering professor Braden Allenby said in an email Friday.

“This might be a way to equip warriors with night vision directly, and because it is temporary, it might be less risky than permanent treatments such as genetically engineering warriors’ optical systems,” he said.

Nanoparticles might be designed to enable perception of radiation in other wavelengths giving inspectors and customs officials the power to see smuggled radioactive materials, Allenby said.

Members of a military unit might be equipped with different visual capabilities, he said, adding: “It will be a while before warriors are getting this treatment, because there needs to be a lot of work to make sure it is safe for deployment, and works as advertised, with humans in the field.”