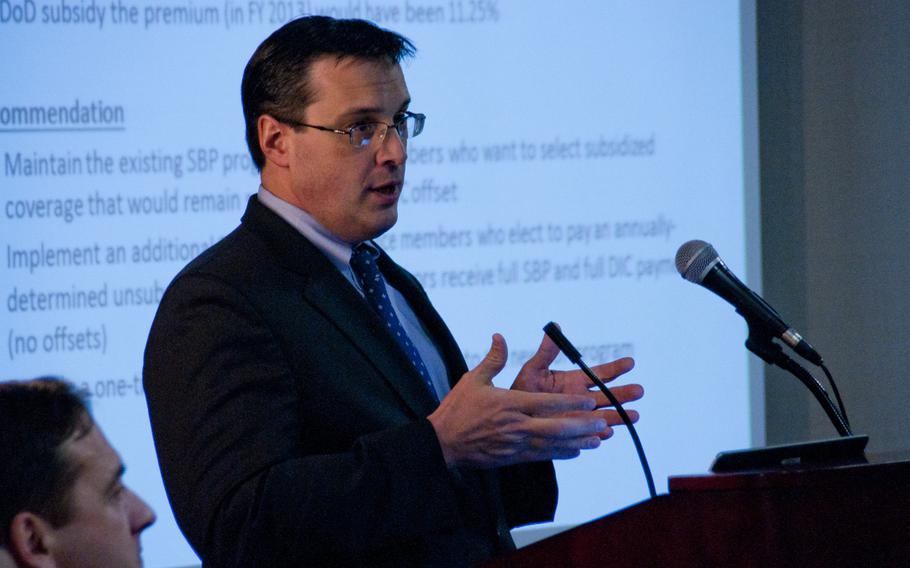 WASHINGTON — Troop and military family associations were divided Wednesday over a proposal to abandon the Tricare health insurance system in favor of a larger privatized system with higher fees.

The Military Officers Association of American, which was among the groups testifying before the Senate, said the Defense Department should focus on saving consolidating and reforming Tricare. But others such as the National Guard Association told lawmakers it is open to an overhaul.

Congress is weighing changes now that would raise average annual health insurance premiums from about $500 to over $1,700 over the next 15 years. But a panel appointed by lawmakers to review ballooning costs of the system said changing over to a fully privatized system will increase access and quality of care beyond the fee increases.

“The one thing we all agree upon is the status quo is not acceptable,” said Vice Adm. Norbert Ryan, president and CEO of MOAA. “We believe the problems Tricare has can be address in a systemic manner without resorting to its elimination.”

The system has been veering toward less choice and access since the 1990s and now is stuck in a “death spiral,” falling far behind other networks in its number of providers and ability to incorporate new types of medical care, according to the Military Retirement and Compensation Modernization Commission, which released a voluminous report to Congress this month with reform recommendations.

The commission has proposed provided a health care allowance and giving servicemembers, military families and retirees access to an expanded network of about 250 coverage plans, which is similar to what federal employees are offered.

Ryan said the true problem with the health care system and insurance is that it is spread over three departments. MOAA has proposed creating a unified medical command that has a single budget authority to wring costs and efficiencies out of Tricare.

But Maj. Gen. Gus L. Hargett, president of the National Guard Association, said an overhaul would likely be “well-received” by members who have become frustrated by shortcomings in the current system.

“I think if we continue to do the same thing with the same system we will get the same results,” Hargett said. “I think we need to look at change.”

The National Military Family Association is open to the ideas but would prefer giving the Defense Department more time to study the Tricare proposal and decide what course to take, said Joyce Raezer, the group’s executive director.

The Senate Armed Service Committee is holding a series of hearings on reforming Tricare and the military retirement system as it stares down a defense budget cap this year and needs options to save money. The military has targeted personnel costs such as health insurance as a prime area for reducing costs.

So far, senators have been warm to the reform proposal.

“I think they need to get over that hurdle that something needs to give … we need to pay more [for Tricare premiums] or the system is gong to collapse over time,” Sen. Lindsey Graham, R-S.C., said.

Sen. Tom Cotton, R-Ark., said there is widespread agreement that the health insurance must be overhauled to a more private system and it is up to lawmakers to explain to the public why it will be a positive change.

He said an overhaul will mean beneficiaries pay more but get more from their health insurance. Sticking with the current system will still mean paying more and result in deteriorating service and access as time goes on, Cotton said.