Torture: Why the uniformed military balked at ‘enhanced interrogation’ 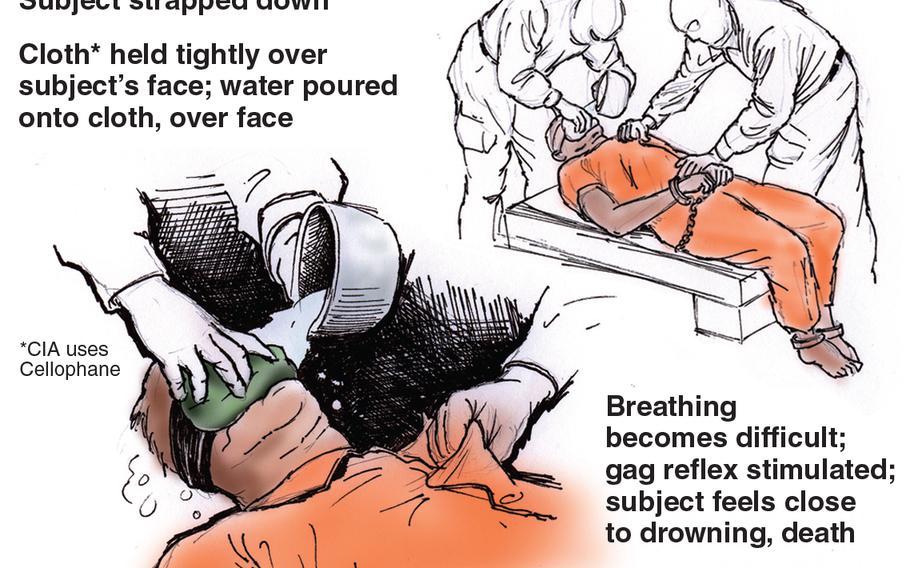 WASHINGTON — More than a decade before the Senate intelligence committee released its report on the CIA’s post-9/11 interrogation practices, the U.S. military’s top lawyers were warning that “enhanced interrogation techniques” were legally questionable, likely ineffectual and could expose American troops to criminal prosecution and torture at the hands of their own captors.

Those warnings, similar to the findings of the report that was released Dec. 9, came in the form of several memos generated in early 2003 after then Secretary of Defense Donald Rumsfeld tasked a Defense Department working group with conducting a legal review of the proposed techniques, including waterboarding and sleep deprivation.

At the time, the services were pushing back against the Department of Justice legal counsel, which argued in the ‘torture memos’ that the Geneva Conventions on treatment of prisoners of war did not apply to suspected terrorists held at Guantanamo Bay. Supporters of the tough new techniques argued that al-Qaida and other Islamic extremists were “unlawful combatants” rather than prisoners of war like the Germans and the Japanese in World War II.

“I question whether this theory would ultimately prevail in either U.S. courts or in any international forum,” Maj. Gen. Thomas Romig, Army judge advocate general at the time, wrote in a March 2003 memo to the Department of the Air Force general counsel.

Maj. Gen. Jack Rives, the deputy judge advocate general of the Air Force at the time, echoed those concerns. He wrote in a February 2003 memo that several of the proposed techniques “on their face, amount to violations of domestic and criminal law and the UCMJ (e.g., assault) …”

He wrote that other countries would probably consider the techniques as violations of international law and their own national laws, placing interrogators “and the chain of command at risk of criminal accusations” at home and abroad.

Romig, now retired from the military, said concerns about overseas arrest and prosecution are still valid, and those connected with the CIA’s enhanced interrogation program could still be at risk.

“Torture is an international crime. It has no statute of limitations. I would not, if I were those people, travel to a foreign country,” he told Stars and Stripes in a telephone interview.

The lawyers also warned in the memos that abandoning the Geneva Conventions went against American values and could lead to the torture of captured American troops.

“If it’s OK for us to [torture], why wasn’t it OK for the Germans and the Japanese to do it [during World War II]?,” Romig asked in the interview. “Why wouldn’t it be OK for our next combatant in the future — whoever that might be — to do it against us?”

The Army brass shared a similar view, according to Romig.

“There was a pretty solid consensus, certainly among the leadership, that we shouldn’t be doing this at all,” he said. “I think that’s where they lose sleep when they think that, because of these kinds of activities, there’s a possibility that this will be done against our own” troops.

Supporters of the techniques, including former Vice President Dick Cheney and CIA Director John Brennan, defended the program, saying it provided valuable intelligence in the months after 9/11 and helped prevent new attacks — a claim disputed in the Senate report.

Doubts about the effectiveness of torture in obtaining reliable information were raised early on by military lawyers, Romig said. In a 2003 memo, he wrote that information obtained under torture “may be of questionable practical value,” later citing the experience of U.S. servicemembers captured in Korea and Vietnam who were tortured into making false confessions for propaganda purposes.

Another concern among military lawyers was that changing the rules for interrogation of ‘high value’ detainees at Guantanamo might lead to abuses of lesser prisoners in other conflict zones — a fear that appeared to have been borne out in Iraq’s Abu Ghraib prison, where 11 U.S. soldiers, most of them enlisted, were later convicted of various offenses stemming from prisoner abuse.

“While the detainees’ status as an unlawful belligerent may not entitle them to the protections of the Geneva Conventions, that is a legal distinction that may be lost on the members of the armed forces,” wrote Rives, who is now retired from the military. He warned that approving exceptional interrogation techniques “may be seen as giving official approval and legal sanction” to methods which the U.S. armed services “have heretofore been trained are unlawful.”

Romig believes that the well-documented abuse of prisoners in Iraq at the hands of American troops stemmed from confusion in the lower ranks about what was legal and what was not.

“Once they let the cat out of the bag that the rules were beginning to slip (at Guantanamo), then people learned of that — learned of it through rumor, learned of it through people who had been assigned to Guantanamo and then came to Iraq. And it caused a lack of respect for the rules, a lack of respect for the law, and … it really made it much more chaotic and it loosened the discipline that needs to be in place for interrogators,” he said in the interview.

Even before the Abu Ghraib scandal erupted, top military lawyers had warned that revelations of American torture could backfire and undermine support for the war.

In the wake of the Abu Ghraib prison scandal, the Army revised its Field Manual to clarify that a number of harsh tactics were against regulations.

Defenders of the program have cited the public alarm in the wake of the 9/11 attacks and the widespread fears at the time that al-Qaida was planning a second, even deadlier, wave of assaults.

“I have no problem, as long as we achieve our objective and our objective is to get the guys who did 9/11 and it is to avoid another attack against the United States,” Cheney said Sunday on NBC’s “Meet the Press.”

Cheney disputed that the techniques amounted to torture.

“Well, torture to me … is an American citizen on a cell phone making a last call to his four young daughters shortly before he burns to death in the upper levels of the trade center on 9/11,” Cheney said Sunday on NBC’s “Meet the Press.” There’s “this notion that somehow there is moral equivalence between what the terrorists did and what we do, and that is absolutely not true. We were very careful to stop short of torture. The Senate has seen fit to label their report ‘torture,’ but we worked hard to stay short of that definition.”

According to a recent Washington Post-ABC News poll conducted after the Senate intelligence committee report was released, a majority of Americans believe that the CIA’s treatment of detainees was justified. A majority also believe that, going forward, there may be cases where torture is warranted, according to the poll.

Romig is concerned that at some point in the future, civilian leaders might once again authorize torture if faced with similar grave threats.

“There are a lot of people out there — most of them uninformed about the military, uninformed about interrogation — who think … that anything is justified in defense of the country,” he said.

He said if it were up to the military, “We’ll go to extreme ends to defend the country, but we’re not going to put ourselves down in the gutter with the people we’re fighting to do that.”