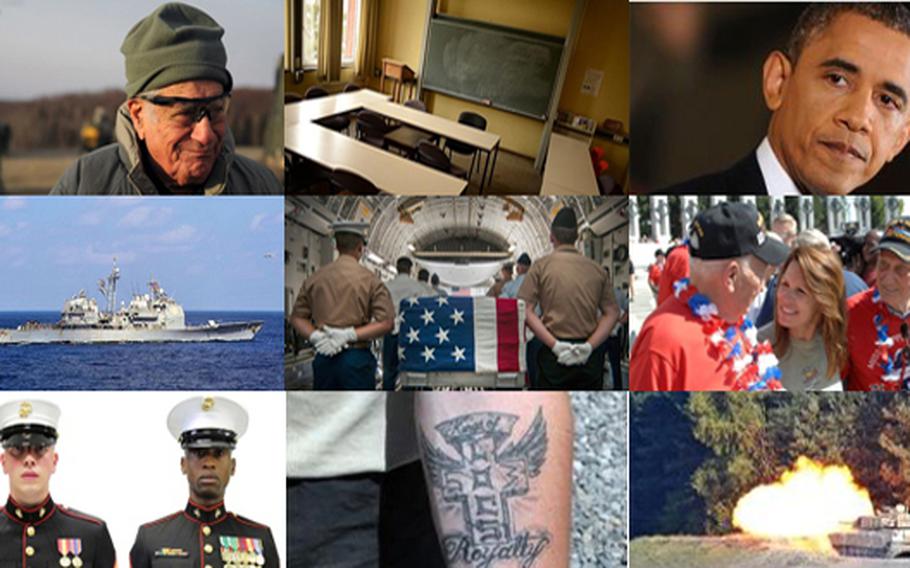 Buy Photo
Images from some of the most popular stories on Stripes.com in 2013. (Stars and Stripes)

Sexy keywords, feature interviews with veterans, international tension – the Top 10 most read stories for 2013 on Stripes.com has it all.

And of course, stories related to furloughs and the government shutdown snuck in the list of staff-written stories, too.

There were other big story lines in 2013 that were unable to crack the Top 10: Army commander suspensions at Vicenza and Zama; South Korean juicy bars; a game-changing tourniquet; benefits for same-sex military couples; the LQA debate; and to never forget, the 13th year of the Afghan war.

What was your favorite or most important story in 2013 from Stars and Stripes?

Peruse the list and as always, thanks for reading:

No. 10: 'Furlough pay calculator released for federal workers,' by Erik Slavin, Feb. 26, 2013.1st paragraph: Federal workers now have a convenient way to calculate their loss in pay if planned furloughs of about 800,000 Defense Department civilians take effect.Quote: “Keep in mind that is not an official pay scale and only estimates how much your pay will change,” according to a base statement announcing the spreadsheet. “Also, the furlough is not set and may not happen.”

No. 9: 'Judge: Obama sex assault comments 'unlawful command influence,'' by Erik Slavin, June 14, 2013.1st paragraph: Two defendants in military sexual assault cases cannot be punitively discharged, if found guilty, because of “unlawful command influence” derived from comments made by President Barack Obama, a judge ruled in a Hawaii military court this week.Quote: “This is bad lawyering on [Obama’s] advisor’s part,” said Victor Hansen, vice president of the National Institute of Military Justice and former instructor at the Army’s JAG school. “It’s certainly not a problem to say that sexual assault is a bad thing and we need to weed it out … that’s innocuous. It’s when they get very pointed that it’s problematic.”

No. 7: 'Chinese warship nearly collided with USS Cowpens,' by Jon Harper, Dec. 13, 2013.1st paragraph: On Dec. 5, a Chinese warship nearly collided with a U.S. Navy guided missile cruiser, according to U.S. Pacific Fleet.Quote: “I don’t know the intent of the guy driving that PLA ship,” one of the officials said. “I just know that he was moving to impede and harass the Cowpens. I mean, from my perspective, having him stop in the middle of the South China Sea is kind of dumb …"

No. 6: 'Former paratrooper recalls WWII incident that led to beer fame,' by Matthew M. Burke, Nov. 23, 2013.1st paragraph: It took 65 years for Vincent Speranza to find out that his actions in Belgium during World War II had been immortalized — for his ingenuity with the beverage that the country is famous for producing.Quote: “Speranza found a working beer tap there. He filled his helmet — the same one he had used as a foxhole toilet — and made two trips to the wounded in the church."

No. 5: 'JPAC admits to phony ceremonies honoring ‘returning’ remains,' by Stars and Stripes staff, Oct. 10, 2013.1st paragraph: The Department of Defense unit charged with recovering servicemembers’ remains abroad has been holding phony “arrival ceremonies” for seven years, with an honor guard carrying flag-draped coffins off of a cargo plane as though they held the remains returning that day from old battlefields.Quote: “That’s disturbing. I don’t know when they stopped being honest and switched over to this Mickey Mouse, but whoever did it, I hope they find him a new job somewhere,” said Jesse Baker, an 81-year-old Air Force veteran of World War II and Korea.

No. 4: 'Army suspends tuition assistance program for troops,' by Mark Patton, March 8, 2013.1st paragraph: The Army announced Friday it is suspending its tuition assistance program for soldiers newly enrolling in classes due to sequestration and other budgetary pressures.Quote: “(Tuition Assistance) is something I’ve been utilizing my whole Army career to help me stand out from my peers and benefit my family,” Sgt. Daniel Phillips said. “I had a degree plan set up and this is going to be a huge setback.”

No. 3: 'Marines shoot down Internet story on Obama’s alleged push for ‘girly hats,’' by Jennifer Hlad, Oct. 24, 2013.1st paragraph: The story is sweeping the Internet: President Barack Obama is trying to emasculate male Marines by making them wear a girly cover with their famed dress uniforms. The only problem? It’s not true.Quote: “The president in no way, shape or form directed the Marine Corps to change our uniform cover,” according to the Marine Corps statement.

No. 2: 'WWII veterans storm DC memorial closed by government shutdown,' by Leo Shane III, Oct. 1, 2013.1st paragraph: Wheelchair-bound elderly veterans pushed aside barricades to tour the World War II Memorial Tuesday morning, in defiance of the government shutdown which closed all of the memorials in the nation’s capital.Quote: “We didn’t come this far not to get in,” one veteran proclaimed.

No. 1: 'Soldiers told new rules governing tattoos, grooming standards on the way,' by Josh Smith, Sept. 23, 2013.1st paragraph: In the works for more than a year, strict new rules governing things like tattoos and grooming for soldiers have been approved by the Secretary of the Army and are only awaiting a final signature, Sgt. Maj. of the Army Raymond Chandler said Saturday.Quote: When a soldier gets a tattoo that contains an curse word on the side of his neck, “I question ‘Why there?’ Are you trying to stand out?” Sgt. Maj. of the Army Raymond Chandler said.