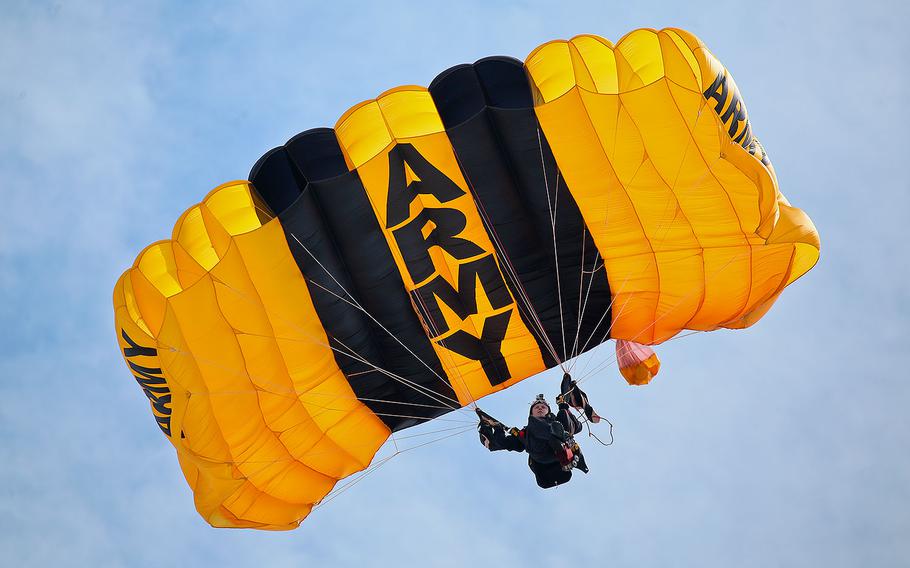 A soldier with the U.S. Army Parachute Team, the Golden Knights, participates in the Thunder Over the Boardwalk Air Show in Atlantic City, N.J. on Aug. 23, 2017. (Matt Hecht/U.S. Air Force photo)

Three soldiers from the Army’s parachute demonstration team are in a Miami hospital following a nighttime training accident at Homestead Air Reserve Base in Homestead, Fla., according to a news release from the Army Recruiting Command. The incident occurred at about 4 a.m. Tuesday.

The injured soldiers are all members of the U.S. Army Parachute Team, known as the Golden Knights, and were participating in a routine night training operation, the release stated.

The three injured soldiers were taken by air rescue to the Ryder Trauma Center at Jackson Memorial Hospital in Miami, CBS Miami reported.

Kelli Bland, a spokeswoman for the recruiting command, said, as of 5 p.m. EST, all three soldiers remained hospitalized, with two of them in critical condition and one in serious condition.

The incident is under investigation at this time, according to the Army.

The Golden Knights is an aerial demonstration team of about 95 men and women, according to the team’s website. It includes four parachute units, an aviation unit and a headquarters, all based out of Fort Bragg, N.C.

The demonstration teams, which use five dedicated aircraft, perform at more than 100 events each year, the website stated. The tandem section is known for taking soldiers, celebrities and heads of state on jumps, and the competition section focuses on winning national and international skydiving events.

The team visits Homestead in the winter to conduct training.