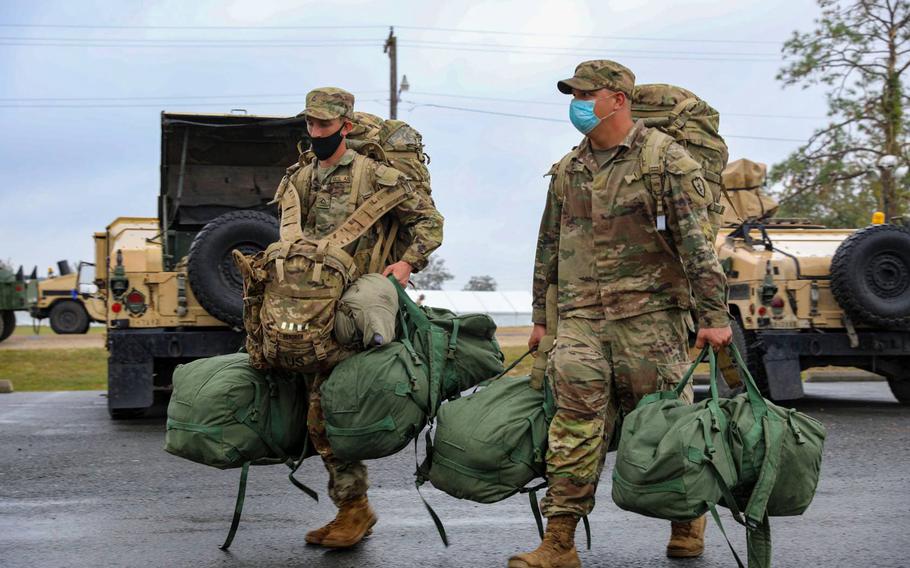 Fort Polk on Friday was bracing for Hurricane Delta, which was expected to make landfall in Louisiana by evening and drop to tropical-storm intensity by the time it reaches the Army installation.

Soldiers with Hawaii’s 2nd Infantry Brigade Combat Team, 25th Infantry Division — who only recently arrived for a training rotation at the Joint Readiness Training Center — were moved out of the vast tent city to “hard-stand structures” at Fort Polk, Brig. Gen. Patrick Frank, commander of Fort Polk and the training center, said Thursday in a video posted on Facebook.

The Hawaii brigade was on the cusp of commencing the 10-day pseudo-combat scenario when they had to shift gears and hunker down for the storm.

“All the structures that these soldiers are going into withstood 96-mph winds of Hurricane Laura, so these structures are very sound,” Frank said.

When Hurricane Laura hit the southwestern Louisiana Gulf Coast on Aug. 27, it was packing winds gusting as high as 150 mph. It demolished homes, businesses and trees across the state, killing 25 people. When the storm reached Fort Polk, located on U.S. Hwy 171 just outside the city of Leesville, it damaged homes and blew off the steeple of the Main Post Chapel.

The latest storm is expected to deliver wind gusts of up to 55 mph, but Frank warned soldiers and their families against complacency.

“The tropical storm winds still pose a concern for us across the installation,” he said.

Helicopters that the 25th Infantry Division brought with them for the rotation were sent Fort Hood to ride out the storm, as were choppers belonging to Fort Polk’s 1st Battalion, 5th Aviation Regiment, Frank said.

Soldiers with the 2nd Infantry Brigade Combat Team spent most of Thursday transferring water, MREs and bags from the tent city — where some tents loom as large as gymnasiums — to frame buildings, Maj. James Sheehan, spokesman for the brigade, said during phone interview with Stars and Stripes Friday.

“It’s a little rainy and windy right now.” Sheehan said while checking the weather outside his door.

“We are anticipating over a foot of precipitation in the next three days that will definitely build in the already saturated training environment that we're entering into,” he said.

Once the storm passes, roughly 4,000 troops — including soldiers from Fort Polk, Indonesia and Thailand — are set to undertake the training as Task Force Warrior, which will take on Geronimo, the “enemy” force inside “The Box,” as the vast training center is known, Sheehan said.

It’s anticipated that the storm will alter the training landscape with fallen trees, mud swells, overflowing ditches and submerged water crossings, he said.

“So honestly, our combat leaders are kind of excited because we think it kind of adjusts the balance because the opposition force … usually has a tactical advantage over us because they know the terrain really well,” Sheehan said.