‘The Outpost’ depicts leadership, valor and heartache of Battle of Kamdesh 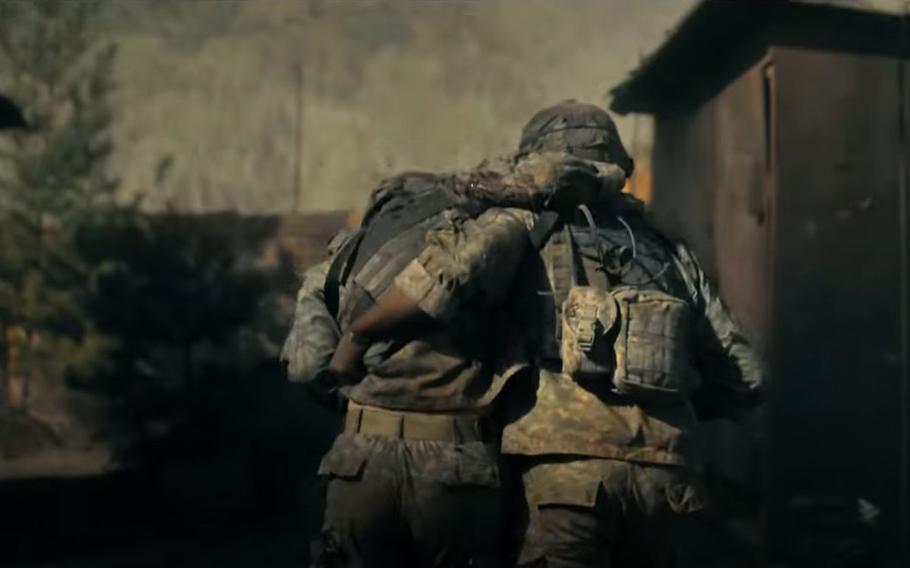 AUSTIN, Texas — Movie audiences can experience one of America’s most decorated battles of the ongoing war in Afghanistan as “The Outpost,” a veteran-directed film on the 2009 Battle of Kamdesh, hits theaters and on-demand streaming services July 3.

The battle occurred Oct. 3, 2009, when more than 300 Taliban fighters attacked Combat Outpost Keating in a remote valley outside of Kamdesh. Outnumbered, about 50 soldiers from Bravo Troop, 3rd Squadron, 61st Cavalry Regiment, fought for 12 hours as the enemy breached the walls of the outpost until reinforcements arrived. In the end, eight soldiers died and 27 were injured.

There were feats of heroism as well. Then-Spc. Ty Carter and Staff Sgt. Clinton Romesha received the Medal of Honor and nine others were awarded the Silver Star. Nearly two dozen more received the Bronze Star and 27 received Purple Heart medals.

“This battle was won as a result of very strong leadership on the ground and very strong character embedded into these men,” said Rod Lurie, director of “The Outpost,” and 1984 graduate of the U.S. Military Academy at West Point, N.Y. “The leadership at the ground level, in the captains and below, was absolutely extraordinary.”

Lurie, who directed “The Last Castle” and “Straw Dogs,” said he is energized by movies of leadership, character and principle, and was immediately drawn to that element of the battle.

“In this particular battle, their only mission was to survive. The mission of the base eventually became just stay alive. That is how it ended,” he said. “Eight men died in this battle, but 46 survived and it was due to the leadership, but also the fact that every man died trying to save another man.

To re-create the terrain of COP Keating — in a lush, jungle-like valley surrounded by steep mountains near the Pakistan border — Lurie found a quarry in Bulgaria where he rebuilt the base. Veterans of the battle helped bring their experiences to life, including Carter, who left the Army as a staff sergeant in 2014.

“It did bring back a lot of memories. There was an off-putting eerie feeling,” Carter said of the set. He served as a military adviser and co-producer. “A couple times I got emotional just watching or seeing the replay on the screen.”

Though Carter has a small acting role in the film, his actions in battle are portrayed on screen by actor Caleb Landry Jones. Romesha, fellow Medal of Honor recipient, is portrayed by Scott Eastwood.

In a way, Carter said seeing the filming was a form of therapy. “You watch somebody else do it over and over again, it removes the anxiety,” he said.

Fellow veterans of COP Keating Stoney Portis, Christopher Cordova, Daniel Rodriguez and Henry Hughes also spent time on set, Lurie said. Hughes was a co-producer and actor in the film, portraying Brad Larson. Rodriguez portrays himself in the movie. During the battle he was in the mortar pit when Pfc. Kevin Thomson died — the first of eight deaths.

“He had to recreate the death of his best friend for us to watch,” Lurie said.

There is no shying from death — or its impact on survivors — to re-create such a bloody battle. That challenge nearly caused Lurie to walk away from the project after his 27-year-old son, Hunter Lurie, died suddenly of a blood clot in 2018. The movie is dedicated to him in the closing credits.

“I didn’t know if I would be able to make the film,” he said, noting the closeness in age of his son and the men who died at COP Keating. Most of them have surviving family members who continue to grieve the loss. “What I did know is how to film their deaths because if somebody were to make a movie about the death of my son, I wouldn’t want to have sweet music. I wouldn’t want to have it glamorized. I would just want the world to see exactly how he died with the precise fanfare in which he died, because that would be the most respectful thing.”

With the encouragement of his daughter, Lurie said he was able to return to the movie.

“The deaths in the middle of battle are matter of fact, because you can’t stop and sort of memorialize the moment of somebody’s death. You have to move on,” Lurie said. “They are killed with the indifference of war in our film.”

The movie does take liberty with the way it portrays previous commanders of the outpost, 1st Lt. Ben Keating and Capt. Robert Yllescas. Keating died while serving at the base in 2006 and it was later named in his honor. He is played by Orlando Bloom in the movie.

Yllescas died there in 2008 and is portrayed by Milo Gibson. Their stories are the first half of the movie and help build the narrative of the poor placement of the outpost and how closely the enemy observed the base.

“It was one of the great follies of the military that these outposts were ever created,” Lurie said. Created for counterinsurgency to stem the flow of weapons from Pakistan, it was “a death trap.”

“This outpost was placed in a really godforsaken place,” he said.

In the months that followed the Battle of Kamdesh, two Army officers were disciplined for “inadequate planning” in setting up the base and reacting to reports of planned attacks.

CNN anchor Jake Tapper wrote a book about the COP Keating titled, “The Outpost: An Untold Story of American Valor,” published in 2012, which spanned the history of the base. He helped transform the 500-page book into a script that included Keating and Yllescas and fit into a 123-minute film.

“Putting them into this narrative required playing with time and taking liberties with the fact that [they] did not serve with guys from 3-61,” said Tapper, who discussed the rewriting in real time with veterans and families through a private Facebook group. “In this case, the desire was to honor [Keating and Yllescas] and illustrate how dangerous it was at COP Keating.”

Tapper noted there were other soldiers who died at the base over the years it existed, but he was just not able to write them into the script. “It’s sad that they’re not,” Tapper said. “There’s no right decision.”

Families previewed the film in late 2019 with the expectation it would premiere at the South by Southwest Film Festival in March. However, because of the coronavirus pandemic, the festival was canceled.

“The Outpost” will be released July 3 in select theaters, but also is available for purchase at home through most on-demand streaming services, only in the United States.

The film is based on Tapper’s nonfiction book “The Outpost: An Untold Story of American Valor,” which tells the story of the 2009 Battle of Kamdesh in Afghanistan. Carter and former Staff Sgt. Clinton Romesha received the Medal of Honor for their actions in that battle.