The first female Army chief will be appointed in the next 20 years, McConville says 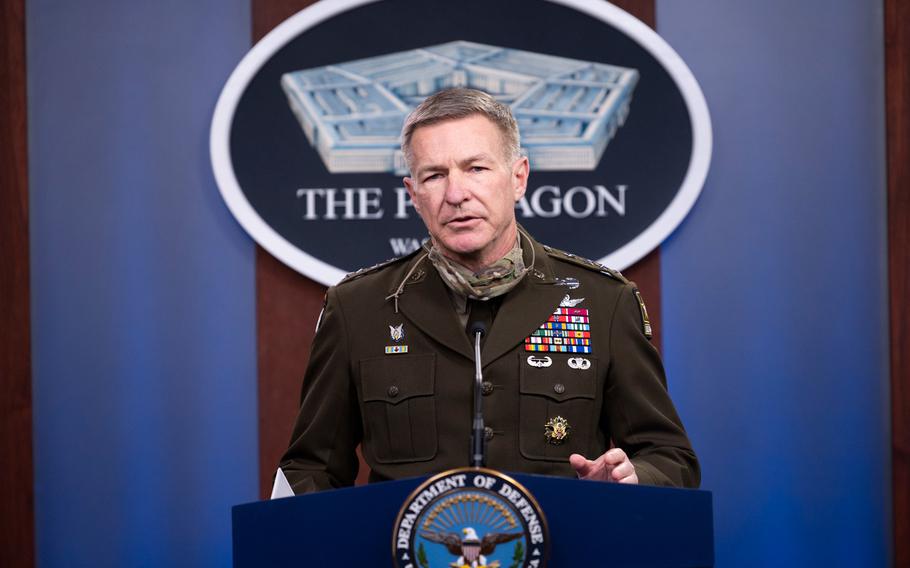 WASHINGTON — Gen. James McConville said he believes the Army will have it first female chief of staff in less than 20 years, it’s just a matter of making certain that the service retains talented women.

McConville mentioned the recent nomination of Army Lt. Gen. Laura Richardson to be the next commander of U.S. Southern Command, and how he had previously picked her to be one of his operations deputies over two soldiers who were Rangers.

“She had that capability,” he said. “She’s going to a [combatant] command, which is a major step in what I think is the right direction... She’s got the right credentials.”

The Army’s list of nominees to be brigadier generals has not yet been released, though McConville hinted the results are “a big step in the right direction” for more women progressing to higher ranks.

The general’s comments followed those made Tuesday night by Fox News host Tucker Carlson about women who serve in the military after President Joe Biden’s International Women’s Day event at the White House that included Richardson and Air Force Gen. Jacqueline Van Ovost, who was nominated to lead U.S. Transportation Command.

Carlson said Biden wants to make the military more feminine by allowing women to have more hairstyles and wear flight suits while pregnant.

“It’s a mockery of the U.S. military,” Carlson said, going on to compare U.S. armed forces to the Chinese military, which he said has become “more masculine” as they assembled the world’s largest navy.

McConville told reporters Thursday that Carlson’s comments were insulting to women in the military. He described how when he was a brigade commander in the 1st Cavalry Division in Iraq in 2004, a woman led a team of Apache helicopters to save an outpost in Najaf from being overrun.

“That team of Apaches was led by Chief Warrant Officer 2 Cindy Rozelle. And I don’t remember anyone questioning her gender after she saved their lives. And there’s tons of stories that can be told like that. And I’m just very, very proud of all the women that serve in the Army, including those in my family,” he said.

McConville’s wife is an Army veteran and his daughter is a captain in the service working as a clinical social worker.

The Army is changing and nominees for high-ranking positions such as chief of staff have typically come from combat career fields but that might not be what is needed in the future, McConville said. Competition for talent through recruiting and retention are a major focus for him, even personally.

His daughter is dealing with how to balance military service and having a family, and one of the issues that he’s working on is bringing more predictability to careers to allow service members to decided when is best for them to have children.

“We’re in a war for talent and we’re going after the best and brightest. And we’re going to do what it takes to keep them in the Army,” McConville said.