'The Evil Within' weaves familiar scares with blood and horror 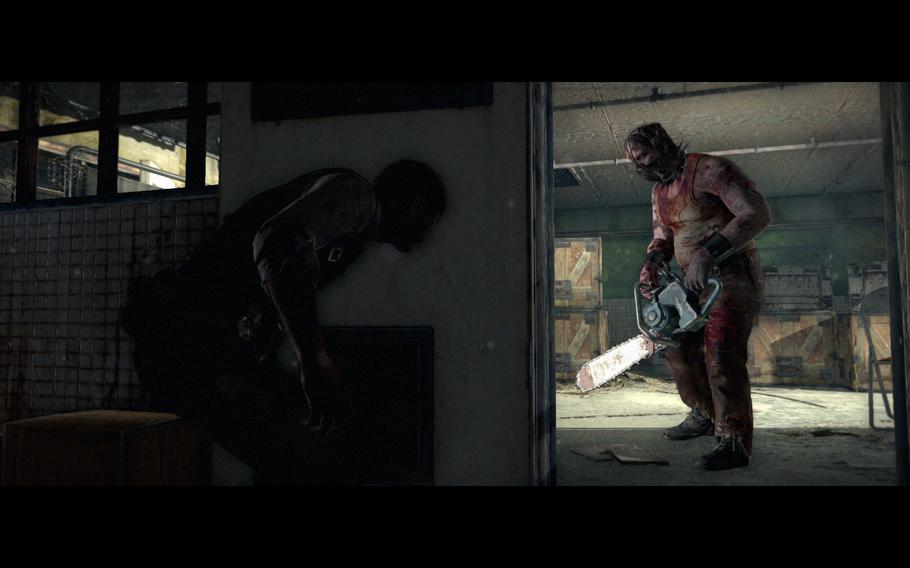 In the early stages of "The Evil Within," you'll be running or hiding from most enemies. (Screenshot)

In the early stages of "The Evil Within," you'll be running or hiding from most enemies. (Screenshot) 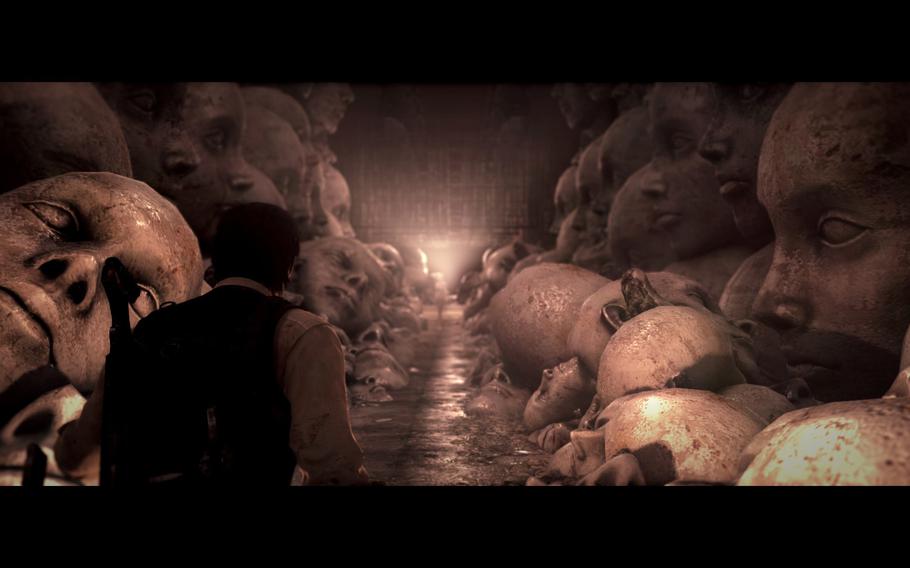 Some of the imagery in "The Evil Within" helps to keep the game interesting long after the mechanics have become stale. (Screenshot) 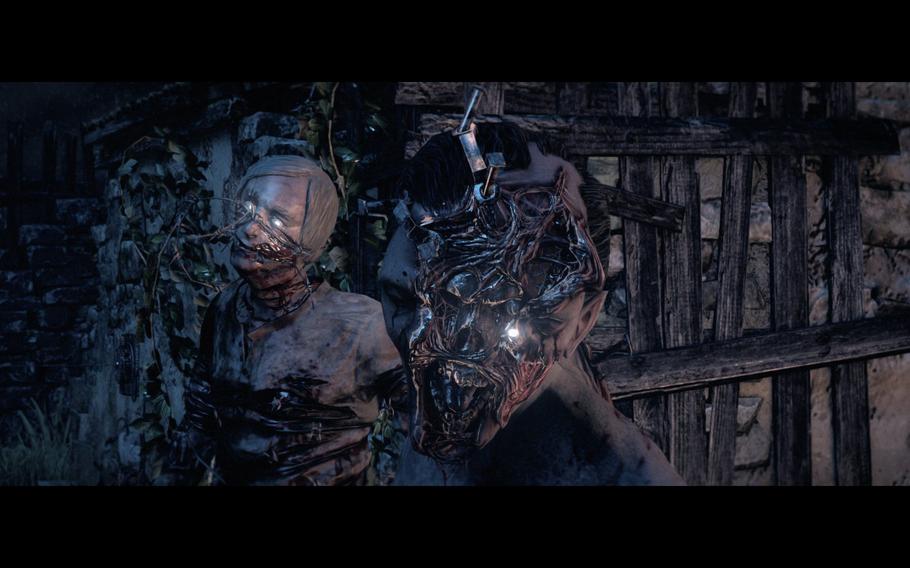 The undead creatures in "The Evil Within" are an interesting take on the tired zombie cliché. (Screenshot) 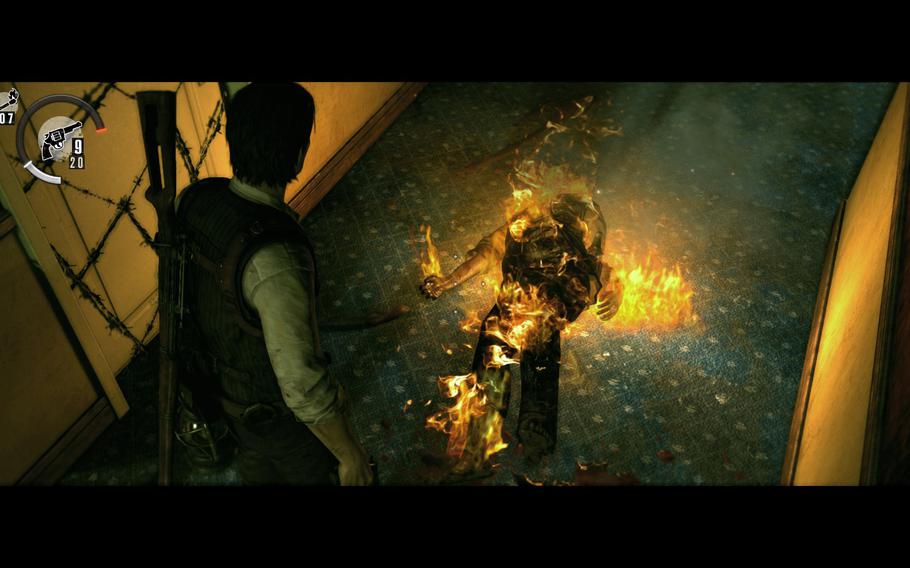 Your best weapon in "The Evil Within" is your collection of matches. Enemies can soak up a fair amount of damage before dying, unless you set them on fire. (Screenshot) 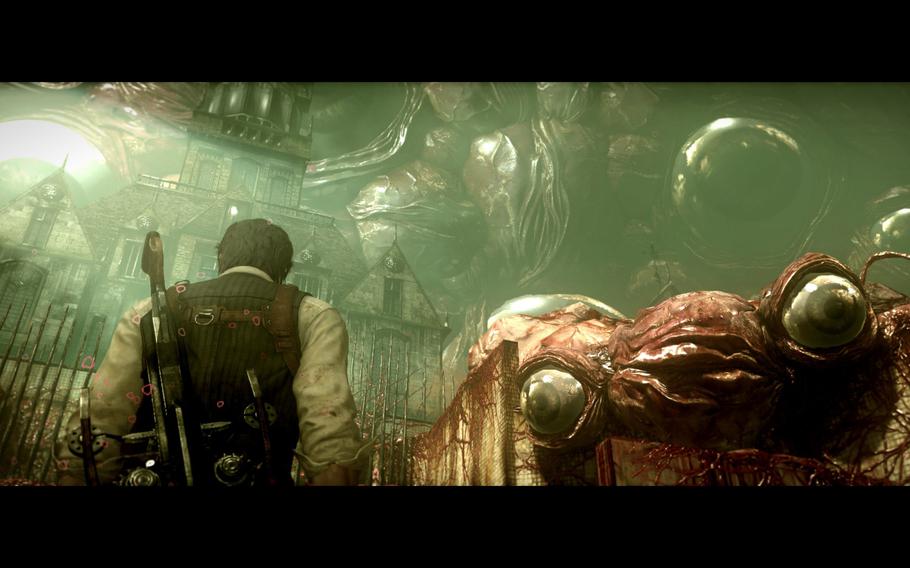 As "The Evil Within" progresses, players will explore odder and odder areas that clearly tested the limit to how much blood and gore could be pushed on screen. (Screenshot)

Shinji Mikami, the creator of “The Evil Within” and legendary mind behind much of the “Resident Evil” series, has created one beautifully cluttered desk with his most recent foray into the survival horror genre.

See, to the owner of a messy desk, the jumbled array of papers, pens, unwashed coffee mugs and day-old doughnuts is ordered. To everybody else, it’s just chaos. Work alongside a messy Marvin long enough, and eventually, their sense of disorder will eventually begin to make sense.

So it goes with “The Evil Within,” a game that at first blush appears to be a mess, but by the end its chaos and disharmony becomes an enjoyable rhythm all its own.

The game is immediately recognizable as the work of Mikami, even if you aren’t able to place a name to his indelible style. The sense of dread and claustrophobia found in his previous games is also found here, as is his fondness for using blood as an ink to tell a tale.

So to, is his love of mixing genres while still treading familiar ground.

“The Evil Within” opens as three police officers are called to investigate a murder at the Beacon Mental Hospital. Once they arrive, something appropriately creepy happens that causes them to split up. From there on, the game largely centers on Detective Sebastian Castellanos, an officer with a troubled past.

As Castellanos investigates the mental hospital, he uncovers experiments being conducted by an evil scientist, a young woman unjustly killed and returned to unlife as a monster and a chainsaw-wielding behemoth looking to massacre everything in sight.

Stop me if any of that sounds familiar.

Its gameplay is equally familiar, as it borrows very heavily from Mikami’s “Resident Evil 4.” As Castellanos makes his trek through the landscape of “The Evil Within,” he’ll explore darkened rooms, fight off “undead” hordes with limited ammunition and use the environment to fend off otherwise invincible foes.

Both games also use the now fairly common over-the-shoulder camera viewpoint that “Resident Evil 4” popularized in the horror genre. That mechanic, unlike the story, is more a refinement than a copy. At least Castellanos can move while shooting, a trick Leon Kennedy couldn’t quite master until later versions of the game.

While the mechanics are very much “Resident Evil 4,” the rest of the gameplay adheres a little less strictly to that formula. Any formula, really.

In fact it takes a while for “The Evil Within” to know what genre it wants to be. In the early stages, Castellanos is the hero of a stealthy mystery game. He’ll have to sneak around, hiding under beds and eliminating foes stealthily in order to survive.

The very next chapter will load him up with enough ammunition to take down a small army, which shifts the game into action territory. Right after that, it goes to some odd middle ground where stealth isn’t an option and ammunition isn’t abundant, so it then becomes a “running away from everything” simulator. The loading screens inform players that sometimes running away is the best option, so this is obviously an intentional part of the game design.

Castellanos will never have to hide under beds or in closets after the initial chapters and some of the enemies from those levels never appear again, so the genre shift is fairly pronounced.

About a third of the way through, the game does find a sweet spot and sticks with it through the end. There are a couple of action setpieces, but outside of those, the game becomes very much about surviving using the environment and a limited set of supplies.

When it finally hits that note, “The Evil Within” becomes the enthralling next-gen sequel that “Resident Evil 4” deserved and Mikami’s brilliant use of gameplay to enhance the sense of horror shines bright.

The game uses a close camera angle that adds to the claustrophobic environments and the invasive sense of danger. Dark is actually dark in “The Evil Within” and Castellanos will have to use his ever-present lantern to avoid traps and the monsters that lurk in the shadows.

Compound that with the fact that every enemy is dangerous and you have a game packed with scares and a tense feeling of dread that never leaves.

The finite resources make exploring every corner both a necessity and a gamble, as that room off the beaten path may hold much-needed healing items and ammo, or simply a gruesome death.

And make no mistake, you will die often. “The Evil Within” is a hard game. While some of that difficulty is organic — in the way of smart enemies who give chase and will even duck when the situation demands it — some of it feels artificial.

Enemies and crates randomly carry items, so sometimes you’ll simply be out of ammo because the creatures you killed dropped nothing to use. On reload, you may find yourself flush with ammo. Add to that the numerous instant death scenarios and monsters that can kill with one hit, and you are left with a very uneven experience that may frustrate some players.

It’s worth pushing past that frustration though, as the game does reward the patient and the diligent with some of the best gameplay the horror genre has seen in some time.

If you can shove aside the stack of genres, brush off the stale story crumbs and re-familiarize yourself with its layout, you may just find an enjoyable place to sit and enjoy a bloody good time among the chaos that is “The Evil Within.”

Bottom line: Horror game fans will enjoy this, even if it’s a little rough around the edges.