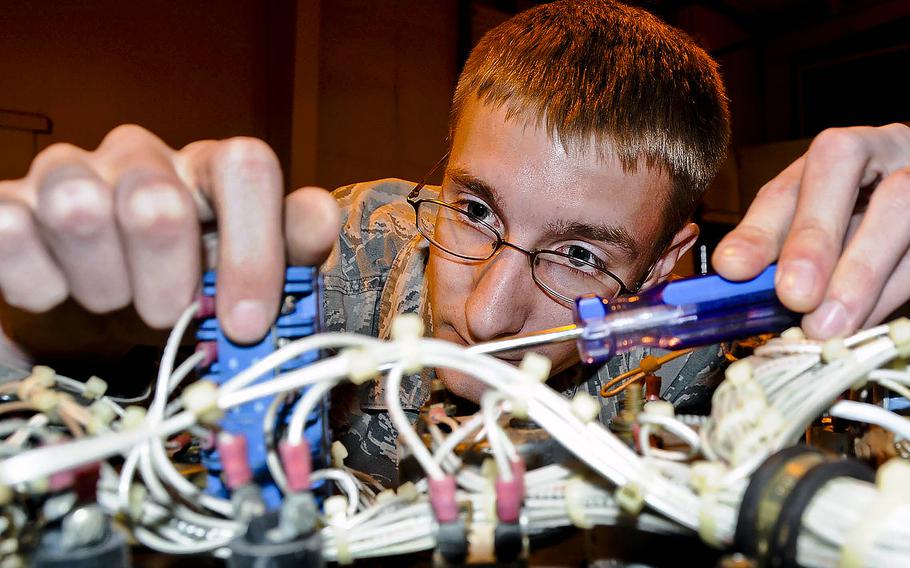 Every year, hundreds of technically or tactically skilled officers and noncommissioned officers, trained at great expense, leave the military for the private sector, not because their skills aren’t needed but because the military up-or-out promotion system and enlisted retention gates favor leadership qualities over technical expertise.

Defense Secretary Ash Carter, in shaping his “Force of the Future” initiative, is weighing creation of new “technical career tracks” that would allow many more high-tech military personnel to serve full careers without having to strive for command or being pushed into supervisory roles.

These new career tracks can be compared to warrant officer ranks used by every service except the Air Force and also to the Navy’s limited duty officer program. But the new tracks would be revolutionary in another sense: they would be used to recruit high-skilled technicians from industry into midgrade officer ranks and career enlisted slots.

The idea would be to avoid the time and expense of having the military train from scratch all of technology experts it will need for future battle spaces and force requirements.

An explanation that Brad Carson, acting undersecretary for personnel and readiness, shared with service leaders notes that there is “little opportunity” now for citizens in “dual-use skills” such as cyber, advance signal, space technology and intelligence to enter the military “laterally” into ranks or pay grades appropriate for their knowledge and experience.

Instead, they must enter as O-1s (ensign or second lieutenant) or no higher than E-4 (petty officer third class, corporal or senior airman) as enlisted specialists. Service branches understandably want “to prevent lateral entry candidates from assuming command roles without proper development,” the proposal explains. Yet current barriers to entry, and to retaining technical expertise, are troubling, it says, given the “proliferation of high technology in warfare and the increasing desire for diverse cognitive and specialized skills in the military.”

Some of the military’s “greatest tactical and technical talent” is being underused and underdeveloped, Carson’s proposal argues, because personnel must compete for command or critical assignments to advance. This not only creates a backlog of personnel competing for the same billets but it raises personnel costs because then technical experts “are promoted out of the rank at which they can perform in jobs for which they are ideally suited and would prefer to make a career.”

One example given is exceptional combat aviators who don’t want to command squadrons, and yet must compete for promotion to stay in service. Likewise, many technical experts have a passion to keep working in their fields rather than supervise others.

If Carter embraces the technical career track solution, he would order each service to designate no fewer than five branches, occupational specialties or career fields to be “dual track” with one toward command or supervisor and the other to hone technical ability. The services would identify an appropriate point in each career field where personnel would choose, or even compete, to stay in their current grade or position based on technical proficiency. Technical tracks would be exempt from promotion and command selection boards. In lieu of “up-or-out” pressure they would face “perform-or-out” hurdles. Because they would be frozen in grade, they would get automatic pay raises based only on years in service.

The Air Force, because it doesn’t have warrant officers, would be “the most radically affected in terms of cultural change,” the document explains. “However, the reform proposal mirrors that of United States’ partners and allies wherein commissioned officers and senior NCOs may remain in particular rank for most of their careers.” These have included pilots, radar operators and cryptanalysts — all jobs with few supervisory responsibilities.

There is potential for significant cost savings too. Without supervisory duties, technical track personnel won’t need to be reassigned often, reducing military moving costs. They won’t get higher pay from promotions, and that also will dampen future retirement costs.

Assuming 250 personnel enter the track from each of five career fields selected by the services, “this reform could yield over $100 million in base compensation savings alone” over its first five years, the proposal estimates. If the number of personnel in each technical track grew to 1000, total savings on personnel could exceed $1.7 billion within five years.

Some outside military manpower analysts are skeptical of the department achieving these reforms before the Obama administration ends in January 2017. But the depth of Carter’s involvement eases that skepticism. Many can’t recall a defense secretary being so conversant on in-the-weeds personnel issues or so steadfast in his commitment to change.

“This is just a much bolder move, to say upfront we need to do something like this to get the human capital, the talent, we need,” said Harry Thie, a senior management scientist at RAND Corp.

Thie has studied military personnel systems for decades and agrees that up-or-out, “at a minimum, diminishes performance and productivity. When you are non-select for promotion, for all practical purposes … the individual feels, ‘I’ve been fired.’ Even if they stay for another four or five years, it can’t be with high morale.”

Thie, a retired Army colonel, predicted the Air Force and Navy will be more comfortable using technical career tracks to recruit outside experts into midlevel officer and enlisted slots.

“For the Army and Marine Corps it might be somewhat harder, because of the deep-seated culture built around the profession” of being a soldier or Marine, Thie said.

An issue critics might raise, Thie agreed, is why the military doesn’t just hire more outside experts as defense civilians to meet growing high-tech needs rather than create an extraordinary on-ramp into uniformed service. Lawrence J. Korb, a senior fellow with the Center for American Progress and former Pentagon manpower chief in the Reagan administration, said lateral entry by way of a technical track “makes a great deal of sense.”

Carter’s Force of the Future, Korb said, might be the most radical overhaul of the military personnel system attempted since launch of the all-volunteer force. That Congress this year is moving to modify retirement for the future force could signal other long-sought reforms are possible, he said.