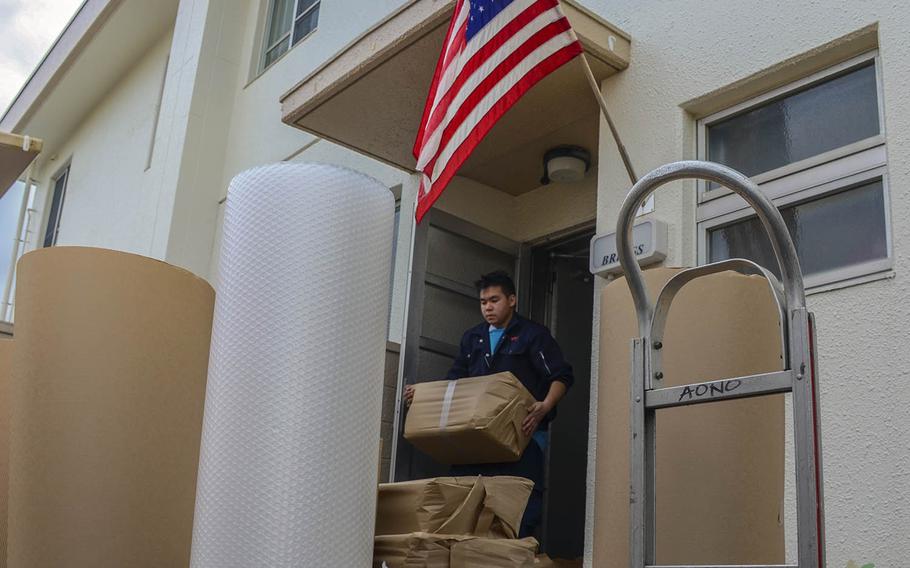 A mover takes a family's possessions from base housing at Yokosuka Naval Base, Japan, on Nov. 13, 2019. (Christian Lopez/Stars and Stripes)

Just before the holidays, Mo Bak, an engineer for the federal government, received a letter demanding $1,600 to reimburse the Defense Department for taxes it paid to move her for her job.

She’d relocated with her two children in 2019 from Marine Corps Air Station Iwakuni to Yokota Air Base, both in Japan. The bill covered taxes on the costs to ship her property about 525 miles from one base to the other.

“(I) honestly didn’t think it was going to be such a huge amount — and this was just on a move in-country,” Bak said. “If I was coming from the states it would be even more insane.”

Bak, like hundreds of other federal employees hired after Jan. 1, 2018, was caught by a change in the Tax Cuts and Jobs Act of 2017 that did away with a deduction for moving expenses, including what the government spent to move its own employees. That money instead was redefined as taxable income.

Now many of those employees must repay the Defense Finance Accounting Service the money it paid the IRS on their behalf. Some will also have to file amended returns for 2018 reflecting the moving benefit.

In September 2018, it began withholding taxes on moving-related reimbursements to employees, but a system to withhold taxes on payments to vendors — such as shipping or storage companies — was not implemented until the following year.

That meant employees who moved before September 2019 still were still on the hook for Medicare, Social Security and federal income taxes on the money the government paid directly to packing, moving and shipping companies.

Those tax bills are now coming due, and thousands of federal employees like Bak should expect debt letters and updated federal income returns in their mailboxes this month, according to DFAS.

Since then, Stars and Stripes interviewed more than a dozen affected workers who reported receiving tax bills between $1,500 and $15,000 for moving benefits.

Tax bill breakdown All moving benefits are taxable now, but because withholding started in September 2018, the outstanding taxes are only related to money paid directly to vendors. Other moving costs such as airfare or hotels were already taxed when the employee submitted a claim for reimbursement.

For those who moved in 2018, DFAS paid the IRS the Social Security and Medicare taxes on money it paid third-party vendors — such as commercial moving companies. For 2019 moves, DFAS also paid the 22% income tax on those payments.

The DFAS debt letters are to reimburse the agency those expenditures.

Employees who moved in 2018 must pay the IRS directly the 22% income tax on the money paid to outside vendors, DFAS said. Those employees will receive corrected federal wage and earning forms — called W-2Cs — amending their 2018 reported income to reflect both earned wages and expenses the government paid to move them.

Reimbursement Affected federal employees can recoup the money they pay in taxes on their moving allowances by applying to either of two programs: Withholding Tax Allowance or Relocation Income Tax Allowance.

A loophole that previously excluded new, retired or separated employees since 2018 from receiving reimbursement was fixed with the 2020 National Defense Authorization Act.

Prior language in the U.S. tax code enacting those programs used the word “employee” when defining eligibility for those programs. That meant people technically between jobs — those who left a civilian job, moved and started a federal job or who quit a federal job — were considered ineligible for reimbursement of the tax on their moving benefit.

“In the case of retirees, it was a betrayal of promises made to them years or even decades earlier, when they first joined (federal work),” the Federal Education Association said in a Dec. 12 statement.

But the defense authorization act — signed into law Dec. 20 — changed the language from “employee” to “individual,” making incoming and outgoing employees eligible for the Relocation Income Tax Allowance.

The change is also retroactive, extending the program to those who moved “anytime in the past two calendar years,” according to the teacher’s union.

Affected employees can file for tax reimbursement through the RITA program after their 2019 or amended 2018 tax returns are submitted, according to DFAS.