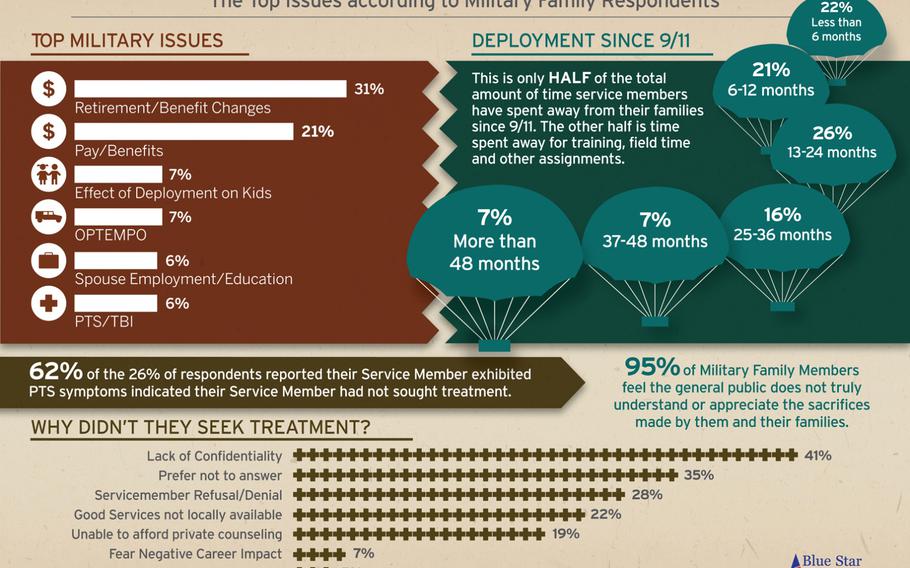 WASHINGTON &mdash; With Pentagon budget cuts and a drawdown in Afghanistan looming, military families are increasingly worried about pay and benefits and less concerned about operational tempo, according to a survey released Wednesday.

The survey of more than 4,000 military families conducted by Blue Star Families reported that economic uncertainty tops the list of concerns.

More than 50 percent ranked retirement benefit changes or general pay and benefit issues as their No. 1 worry. The authors note, however, that the survey was conducted last November at the height of media coverage about proposals to cut retirement benefits.

Still, 70 percent said they were stressed about debt, savings or finances.

Spouse employment was a key issue. Sixty percent of spouses said they were unemployed, with half of those reporting that they wanted to work but were unable to find a job. A majority of the spouses said their partner&rsquo;s military service had negatively affected their ability to have their own career.

The constant moves, child care costs and job market alignment, such as being under or over qualified for available positions, were cited as the top reasons why the military spouse was unemployed.

The military families surveyed reported significant drops in their concern about how operational tempo was affecting them. Both the effect of deployments on children and operational tempo in general were listed by 7 percent as the top concern, down from 15 percent and 14 percent in 2010.

Most of the concerns about family wellbeing surrounded their children. A majority said deployments have both negative and positive effects on the kids, but nearly 30 percent said it was negative or significantly negative and that there weren&rsquo;t enough resources to help them cope.

Thirty-five percent reported they had sought counseling for themselves or at least one child to help deal with negative emotional impacts of deployment.

The survey also revealed that suicidal ideation among family members is as prevalent as with the servicemember themselves. Ten percent of respondents said they had thought about taking their own lives.

&ldquo;Military families are very strong and capable,&rdquo; Meg Harrell, of the Center for a New American Security, said at a panel discussion about the survey on Wednesday. &ldquo;They are not a needy group of families, but they are willing to accept help.&rdquo;

For the first time, post-traumatic stress disorder and traumatic brain injury made the list of a top concerns, with 6 percent listing those brain issues as their primary worry.